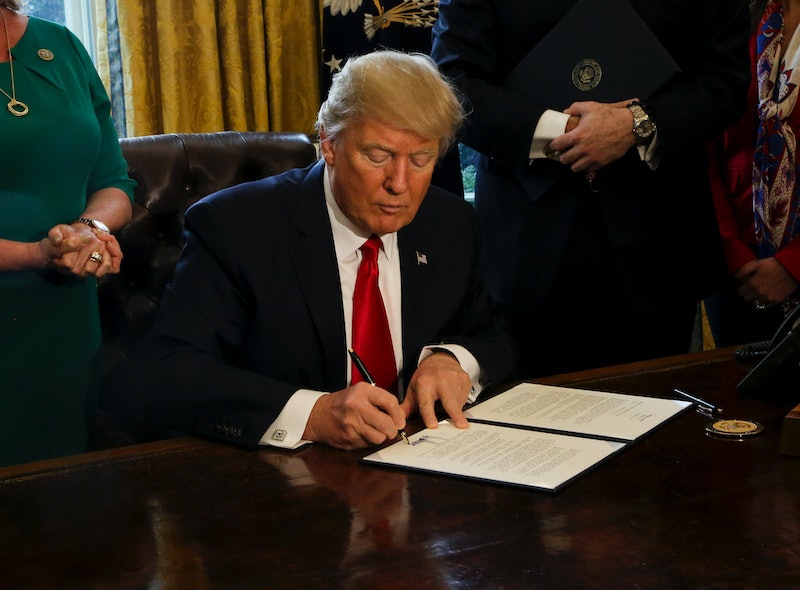 President Donald Trump's controversial executive order banning immigration from seven Muslim-majority countries was heard in a circuit appeals court on Feb. 7, but Trump wasn't at the immigration order appeal hearing. It appears that Trump was at the White House the day of the appeal, which took place in the 9th Circuit Court of Appeals in San Francisco.

The Feb. 7 portion of the immigration ban hearing focused on oral arguments for and against the ban, and because the court is appealing his order, it wouldn't likely rate highly on Trump's presidential to-do list. Furthermore, the federal ruling that comes down from these appeals won't rule on the constitutionality of the orders, but rather will rule if the restraining order against the immigration ban issued by U.S. District Senior Judge James Robart of Seattle will remain in place.

The Department of Justice filed a brief in defense of Trump's order with the 9th Circuit court on Feb. 6, and this communique might act as Trump's "defense" in the appeal. In their brief, the Justice Dept. said that Trump's order is "a lawful exercise of the President's authority over the entry of aliens into the United States and the admission of refugees." On Feb. 7, when the appeals court heard oral arguments, attorney August Flentje, who acts as special counsel for the Justice Department, fielded questions from the court about the order on behalf of the DOJ and the Trump administration.

On Feb. 7, Trump appeared to host a meeting with the National Sheriff's Association at the White House, though his whereabouts for the rest of the day haven't been publicized.

In 2015, when the 5th Circuit Court of Appeals in Texas heard challenges and eventually ruled against President Barack Obama's executive order on deferred action for undocumented immigrants, Obama himself never appeared in court. Instead, as is customary, White House lawyers argued the Obama administration's case to the tree-judge panel in Texas. What was customary during Obama's presidency, however, can't be expected from Trump, who has broken with White House tradition by refusing to release his tax returns, continuing to tweet from his personal Twitter account, and not mentioning the six million Jews who died in the Holocaust on Holocaust Remembrance Day.

There's no way to know whether or not Trump will move to appear before any appeals court himself before they rule about his controversial immigration ban, but if he follows tradition this time, he's unlikely to do so.