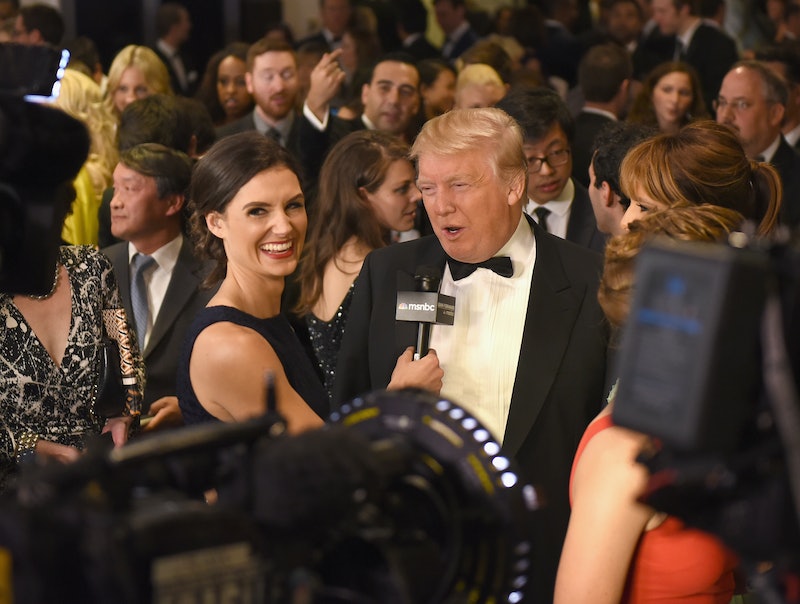 Surprise, surprise. The man once roasted so viciously at a White House Correspondents' Association dinner that people continue to talk about it six years later has said he won't attend this year's event. President Donald Trump bowed out of the upcoming event Saturday in a statement made via Twitter. But why isn't Trump attending the White House Correspondents' dinner? While the president refrained from giving a reason for his absence Saturday, his combative relationship with the press may have something to do with why he's RSVP'ing "no."

"I will not be attending the White House Correspondents' Association Dinner this year. Please wish everyone well and have a great evening!" the president wrote on Twitter.

Traditionally, the White House Correspondents' Association dinner is attended by both the president and the first lady, with the former expected to deliver a joke-filled speech. However, Trump's increasingly combative relationship with the news media may have proved too problematic for a night of laughter and cheeky jabs with journalists.

While Trump regularly criticized reporters and news networks at rallies on the campaign trail, his anti-news media rhetoric quickly escalated following his election victory. In an attempt to delegitimize the press, Trump has regularly used the term "fake news" to describe articles he views as critical of him or his administration.

But while Trump has clearly not been a big fan of the news media in recent years, he appears to have moved beyond criticism. The president went so far as to claim CNN, ABC News, CBS News, NBC News, and the New York Times were "the enemy of the American people" in a tweet published Feb. 18. Most recently, the White House barred reporters from CNN, the New York Times, and the Los Angeles Times from attending a Friday press briefing after turning the normally on-camera, open to all credentialed reporters event into an invite-only off-camera gaggle at the last minute.

Trump's decision to skip this year's White House Correspondents' Association dinner comes as multiple media outlets opt out of hosting parties traditionally linked to the event. First the New Yorker canceled its kickoff party. Then both Vanity Fair and Bloomberg decided against co-hosting their annual after party.

In recent years the White House Correspondents' Association dinner has routinely been criticized for seeming to blur the line between Washington reporters and the politicians they cover. While it's unclear what exactly has spurred Trump's refusal to attend the event, his increasingly combative relationship with the press likely made the dinner a less-than appealing affair.