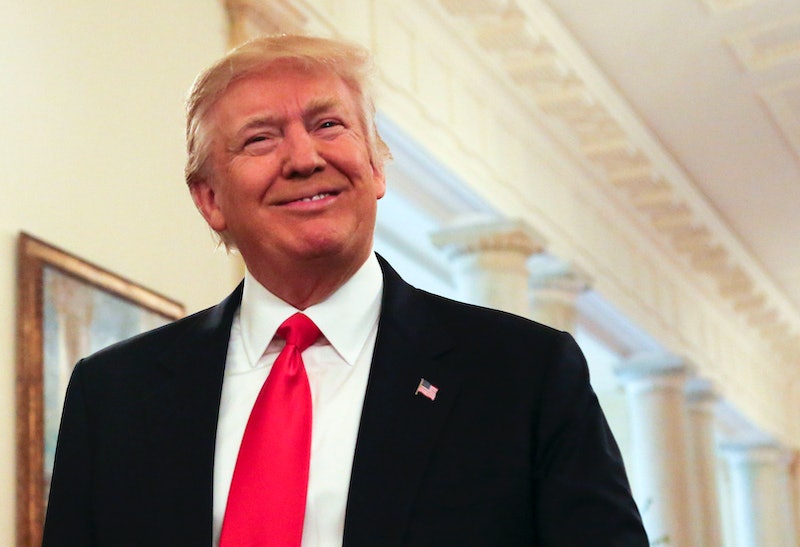 After a little over a month in office, Tuesday will mark Donald Trump's first major address to Congress, where he will share his current policy-based priorities and hopes for the direction of the country. Normally, in the context of how a presidency is run, this would be a called a State of the Union address and would occur annually as a reflection on the past year of presidency, and a meditation on the year ahead.

However, Trump's speech on Tuesday has been consistently referred as an address to the joint session of Congress, rather than a State of the Union. So, you may be wondering, what exactly is the difference? At this point, it's all in a name.

The formal definition for a State of The Union comes from the U.S. Constitution, Article II, Section 3, Clause 1, which says, "The President shall from time to time give to the Congress Information of the State of the Union, and recommend to their Consideration such measures as he shall judge necessary and expedient."

In layman's terms, a State of the Union is when a president addresses members of the Cabinet and the full Congress with his policies and vision, usually annually, but technically, whenever a president sees fit. This is, more or less, what the plan is for Trump's speech on Tuesday night in front of Congress.

"I think [the president] is going to talk very optimistically about where we're going to go as a country and the general policies that he's going to pursue to get us there," shared the White House press secretary Sean Spicer in a press briefing, "I don't think this is going to be the same old Christmas tree kind of State of the Union. And I think there is a little bit of a traditional tweak between a joint address and a State of the Union."

Even after a little over a month in office, there are plenty of policy issues to discuss. On Monday, Trump shared his priorities for the speech with a group of governors visiting the White House. He placed an emphasis on his new budget proposal to increase military spending, making it clear that his budgeting priorities will be a focus in his speech.

The new budget proposal would require a huge $54 billion military increase, and would potentially cut funding from non-military programs in order to make up the deficit, according to a report from The New York Times.

Needless to say, Trump's speech on Tuesday will be just as significant and telling for the proposed direction of our country, regardless of whether it's referred to as a State of the Union, or an address to the joint session of Congress.