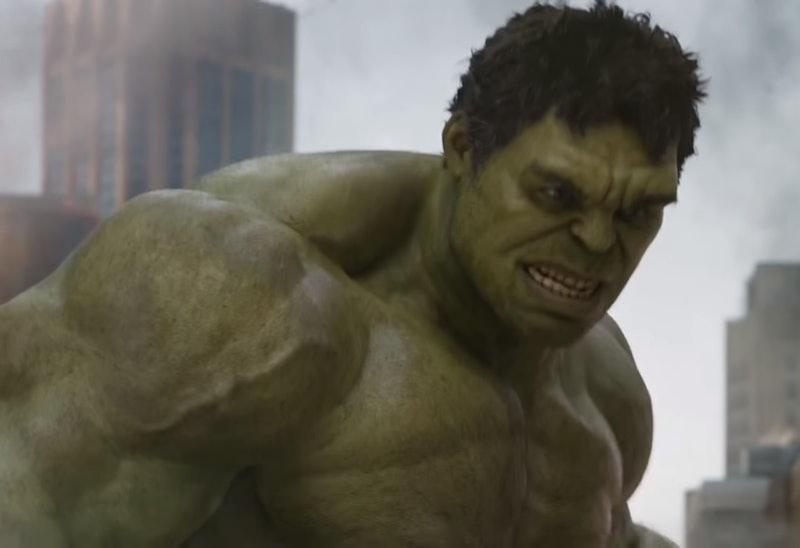 Don't get angry, Hulk fans, but in an interview with Variety at Saturday's D23 Expo, Mark Ruffalo said a solo Hulk movie will never happen. In the business of show, it's best to never say never, but for the foreseeable future, the Hulk is going to have to continue to play well with others. However, this isn't actually bad news.

The actor explained to Variety:

"I want to just make one thing perfectly clear today: A standalone 'Hulk' movie will never happen. Universal has the rights, and for some reason, they don't know how to play well with Marvel. And, they don’t want to make money."

In the hands of Marvel and Ruffalo, Bruce Banner and his green alter ego have become an integral part of the Avengers team. The character is a joy to watch when he's in Hulk mode, while the actor brings real pathos to Bruce. These may all sound like excellent reasons for Marvel to do whatever they have to do to get the film distribution rights back for the character, but in truth, the Hulk works better as part of a team.

Neither the 2003 Hulk nor the 2008 The Incredible Hulk reached the dizzying heights of the best Marvel movies. And that's even with Marvel Studios producing the 2008 film. The Hulk is an established character now, who doesn't need another origin story movie. If Marvel and Universal worked out a deal, they could adapt any Hulk story, including the popular Planet Hulk arc, for the big screen. But would Hulk's extended exploits in space really add anything to the Marvel Cinematic Universe? The answer is no, not when there are so many other characters and worlds to explore.

Even without a solo film, the Hulk's probably not going anywhere anytime soon. He'll continue to play a role in the Avengers movies, and guest star in other character's adventures, like the upcoming Thor: Ragnarok. The big green guy will have plenty of screen time without the stressors of trying to carry an entire movie on his ample shoulders.

Meanwhile, Marvel can focus on the plethora of under-served characters in their back catalog. The best Marvel movies tend to be the ones that take heroes that are far from mainstream and give them the blockbuster treatment. Take the Guardians of the Galaxy, for instance. The misfit space team wasn't well known outside of the comic book community, and yet, audiences quickly fell in love with them.

By keeping the Hulk on their supporting roster, the studio can deploy the character at anytime. Meanwhile, Marvel can continue to focus on expanding the cinematic universe to include new, more diverse characters like Black Panther and Captain Marvel. With any luck, the studio will use the lineup of its next wave of films to offer up more movies featuring diverse heroes. Ultimately, a Hulk movie is unlikely to offer fans anything they haven't seen before. Whereas movies about characters like Black Widow, Miles Morales, Ms. Marvel, and Silk would feature the perspectives of women and people of color in a way Marvel has rarely done yet.

The future of the MCU will be best served by the studio looking forwards, not backwards. The Hulk is a fascinating character, but fans aren't missing out on anything by not seeing him smashing solo on the bigscreen for a third time.