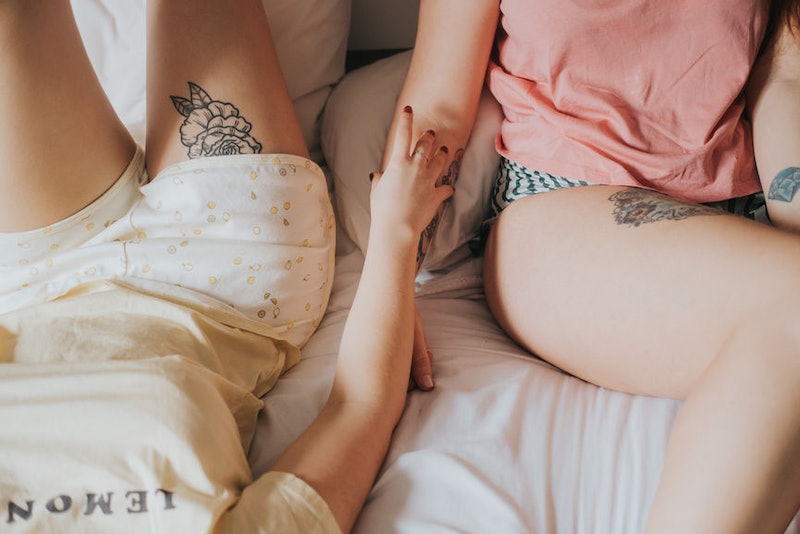 If I'm decisive about anything, it's ice cream flavours. When it's a hot day, I want one and I find picking easy. I like to try new things, so I'll go for the most unusual flavour if it appeals to me, or if not I'll look to the sorbet side and pick the zingiest. Lemon, raspberry, passion fruit, whatever I think will make my tongue tingle the most.

Some people aren't so decisive when it comes to ice cream. I've seen friendships, relationships, and family ties stretched to breaking point over the foggy glass of an ice cream stand. Waffle cone or standard, one scoop or two. But these aren't decisions I find difficult. You could say, when I get to an ice cream stand, I just know.

But I've never "just known" about any relationship I've been in or any person I've been with. And typing that feels part wrong, part revolutionary. As though to admit to it means all my relationships must have been a lie, or that I'm shrugging off a constraint. But doing so is to go against a prevailing narrative.

To say you've never "just known" is to go against a prevailing narrative about what romantic relationships should be like in order to be considered valid.

"I just knew" goes hand in hand with other examples of received romantic wisdom that we sum up in short, easy phrases like "love at first sight." "The one." "Soul mate." All of these tell a story about what romantic relationships should be like in order to be considered valid; they should be characterised by absolute certainty from the offset, by an overwhelming surety that this is your person for life.

If you feel like that about your partner, I'm happy for you. Really, I am. But I never have, and I'm willing to bet there are lots of people, whether single or in happy long-term relationships, who haven't either.

To me it doesn't just seem unrealistic, but actively unromantic. I think it's a way of looking at love that's wrapped up in heteronormativity, monogamy, and the creaking institution of marriage. Within these settings there's little space for doubt or flexibility of feeling. In fact, as counsellor Sheryl Paul puts it, according to received wisdom about western relationships, usually "doubt means don't."

To me, "just knowing" doesn't only seem unrealistic, but actively unromantic.

Paul explains: “'Doubt means don’t' is the dominant message in the mainstream culture. We simply don’t realise as a culture that doubt should be expected around any area of our lives that are meaningful and require risk."

But to go back to the ice cream stand for a moment, if, for many people, making what on the surface looks like simple decisions about a sunny day snack can lead to bewilderment, why are we told we should be so certain about people who, let's face it, are usually never as deliciously fleeting as ice cream? Why are we allowed more doubt about the benefit of choosing salted caramel over chocolate than we are about selecting life partners?

I don't believe in "the one," or in "soul mates." As someone whose parents were never married and who grew up in a single-parent family, a long-term parental partnership was not part of my attachment blueprint. But that doesn't mean that I don't think people can't have long-term partnerships, I just doubt they're as free from doubt as conventional relationship wisdom would have us believe.

And, as Paul argues, doubts are natural and can be beneficial when choosing a partner — something that carries inherent risk. "We also don’t understand that the more sensitive you are, the more thoughtful you’re going to be about every major life decision, including and especially your life partner," she says. "Doubt means you’re awake and alive and deeply thoughtful. Doubt means you’re aware of the risk of loss inherent in love. As long as you’re in a healthy and loving relationship with a well-matched partner, doubt does not mean don’t."

Doubts are natural and can be beneficial when choosing a partner — something that carries inherent risk.

These cultural pressures might not feel that harmful, but everyone loses out from unrealistic depictions of romantic love. And if you suffer from mental health issues that make persistent doubting and lack of certainty a daily difficulty, then it can feel like real love and understanding are out of reach. I've ended a relationship due to feelings of doubt that were caused by nothing more than the fact that sometimes I found my partner irritating and didn't always feel wildly in love every minute of every day. Had there been better representations of anxious love, or love where doubt is present, perhaps I wouldn't have made that decision.

In fact, 'relationship anxiety', and the lesser-known but related 'relationship OCD', can be characterised by persistent thoughts of worry and fear around your feelings for your partner or their feelings for you. I know from personal experience that this can lead those with the condition to police every thought, looking for evidence that the relationship isn't working so they can do the right thing by a partner they care about and break up with them. At the same time, you might feel sad and low because you'd actually rather remain in the relationship but distrust that feeling in favour of the overwhelming "evidence" you've accrued to the contrary.

But there is hope. As Paul explains, "relationship anxiety is completely solvable." She continues: "Once people understand the truth about love, romance, sex, and attraction, and learn the tools that will help them address their intrusive thoughts and other symptoms of anxiety at the root, the relationship anxiety begins to fall away. My bestselling course is my Break Free From Relationship Anxiety Course, and some people find relief and healing within days of signing up. For others, the work takes longer, especially if they have a trauma history around attachment. I’ve seen thousands of people break free not only from their relationship anxiety, but their anxiety in general."

And when it comes to embracing doubt and working to improve anxiety, isn't there something to be said for picking someone every day, rather than sticking with them because you decided you loved them a long time ago? Isn't there something to be said for knowing all your partners annoyances, and choosing them anyway? I think so. So much so that overcoming my own anxiety and intrusive thoughts around romantic love enabled me to rekindle the relationship they previously forced me to end, and it's been going strong for three years.