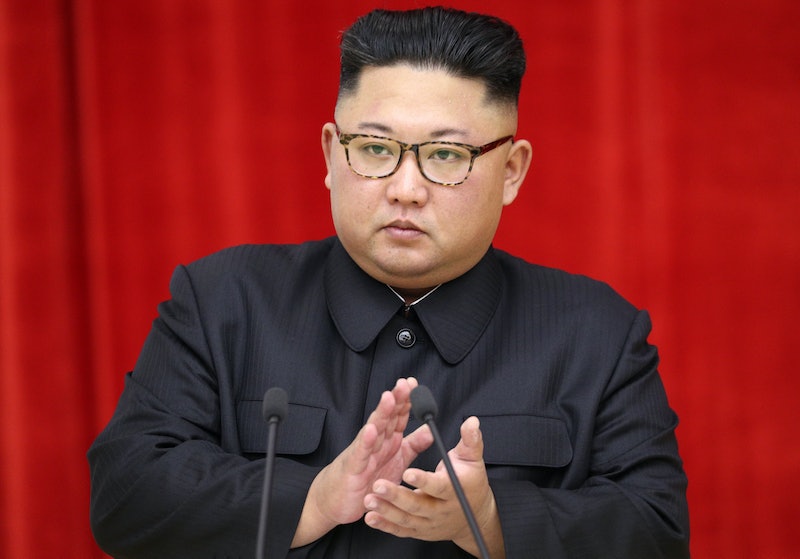 There are some very good transportation choices if you want to get somewhere fast — but as it turns out, speed isn't always key if you're also dealing with geopolitical strategy. Considerations in this area, it turns out, are exactly why Kim Jong Un is taking his train to Vietnam for the upcoming summit with President Donald Trump — despite the fact that his train only goes about 35 miles an hour.

When Kim went to Singapore in June 2018 to meet with Trump for the first time, he borrowed a modern jumbo jet from China, as The New York Times reported. Kim does have his own plane, according to the Times — but it's a Soviet jet that's pushing 40 and running out of replacement parts, so it's not exactly a trustworthy way to travel. While borrowing the Air China Boeing 747 may have worked in convenience terms, it didn't pan out so well when it came to Kim's — and North Korea's — image, as the Times explained.

North Korea has to rely heavily on China in numerous areas, according to the Council on Foreign Relations. China is North Korea's most significant trading partner, and China has also been willing to advocate for North Korea at the United Nations in the past.

Apparently, though, taking the Chinese plane to Singapore turned out to be a step too far for the North Korean dictator. As the Times explained, the image of Kim getting out of that Air China jet led to a plethora of jokes envisioning North Korea as a province of China — which is not exactly how Kim would like to be seen.

“He does not want to show the world his heavy reliance on China by waving his hand in front of China’s national flag on a Chinese plane as he did at the Singapore airport,” said Renmin University North Korea expert Cheng Xiaohe, speaking with the Times. “Traveling by train is a forced choice.”

Of course, meeting with Trump — a historic second meeting with the American president, when no other North Korean dictator before him had ever met a U.S. president in person — is a sign that Kim is looking for friends beyond the borders of China.

At the same time, though, taking the long way through the Chinese heartland gives the Chinese an unparalleled opportunity to show off their economic success for the North Korean leader, as Big Think wrote. While North Korea is the closest thing to the world's only remaining Stalinist country, China is a communist country that has effectively managed to embrace a capitalist system enough to obtain the economic success that eluded, for example, the communist regimes of Central and Eastern Europe. As Kim travels through China, the Times explained, China will effectively have an opportunity to convince him that the economic reforms they carried out are the way to go.

While precise updates on Kim's trip across China are difficult to track down, the trip was expected to take up to three days, according to Reuters. Trump, on the other hand, boarded Air Force One to head toward Vietnam on Monday morning.