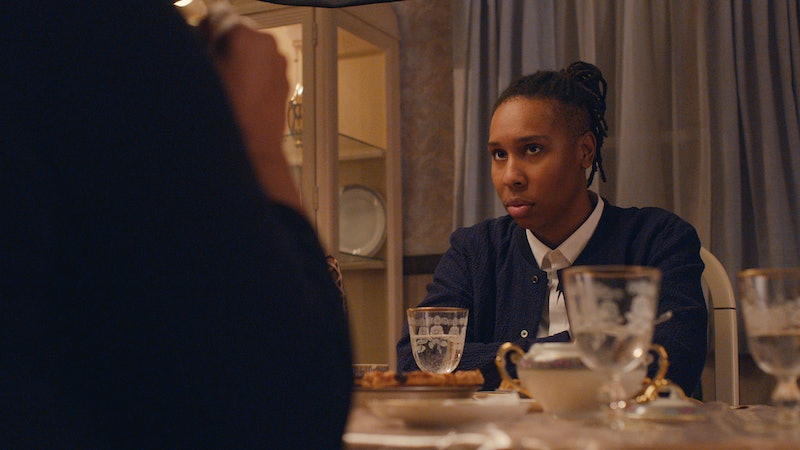 Lena Waithe wasn’t interested in reliving the moment she came out to her family. But her mind changed after Aziz Ansari asked her to write an episode of Master Of None dedicated to her character, Denise. coming out. The Season 2 episode “Thanksgiving,” covers more than a decade of Denise’s life — featuring six different entirely formative Thanksgivings from 1995 to 2017. It mirrors Waithe’s own life in many ways, even down to the posters of Jennifer Aniston and Jasmine Guy covering the bedroom walls.

“We obviously took some creative license here and there,” Waithe tells me over the phone from Los Angeles. “But I sent people pictures of my old room, my mom, my mom’s friends, me, to make sure we got it right.” But there is one major difference between the real thing and what you see on Netflix: “It wasn’t a hard thing to film,” she says. “It was much easier than the actual conversation I had 10 years prior with my mom.”

A conversation in the Master Of None writers room sparked the initial idea for the episode. The show's creators, Ansari and Alan Yang, asked Waithe how she came out. “I started talking about growing up in a house with black women,” she recalls, “and you know, not really hearing the term ‘gay.’ Not really seeing a lot of gay people on television.”

In the episode, a teenage Denise tells Dev she’s “Lebanese,” because she’s uncomfortable saying the word “lesbian” out loud.

According to Waithe, she'd always been apprehensive of telling her coming out story, because she didn't want to relive the pain and uncertainty. It's why she's most interested in telling queer stories about “what life is like after you come out when you’ve found your sort of village and you’re figuring out what you want to do with your life.” This is exactly what she plans to do with her new Showtime series The Chi. Still, when Ansari and Yang asked her to write "Thanksgiving," she knew she couldn't turn it down. She understood that sharing her experience was a chance to show others that they’re not invisible.

“I just sort of felt like, my story is valid, interesting, and funny,” Waithe says. “I think in that way we are being revolutionary and saying, ‘Yes, this queer woman of color is getting her own episode of the season,’ and I think that’s a huge thing for other people of color, whether they’re queer or not, to see.”

"You gotta live your life out loud. That’s when you’ll find happiness and yourself."

Waithe also made this episode with her mom (and all those other moms and dads who have trouble accepting when their offspring come out), in mind. That's why Denise’s mom Catherine (played by Angela Bassett, who Waithe couldn't admire more, saying, “She's a legend, she’s legendary, she’s a queen") isn’t the villain in this story. It’s more complicated than that, which is clear from the heartbreaking diner scene where Denise finally tells her mom that she’s gay.

“I don’t want life to be hard for you," Bassett's Catherine says in the episode, choking back tears. "It’s hard enough being a Black woman in this world, now you want to add something else to that?”

“I think for parents who are minorities they always want their kids to fit into the world as much as possible,” Waithe tells me. “I think whenever someone comes out, their parents think now you’re even more different and that really frightens them, because now society really won’t embrace you.”

However, in the years since coming out, Waithe realizes that she and her mom were on a journey together — both trying to find acceptance and figure out what they mean to each other. “Then there was no book or how-to guide for when your daughter comes out as gay,” the actor says. “You know, they’re doing the best they can and reacting the only way they know how. That’s one of the biggest thing I learned through the whole process, it was difficult for both of us.”

Waithe hasn’t watched the episode with her mom yet, but apparently her mom’s seen it and really liked it. “That’s always a good thing,” she says. Another good thing is that she’s had people reach out to her to let her know how much the episode meant to them. Some fans have even told her the episode helped them come out themselves. For Waithe, the real success of the episode is if others in the LGBTQ+ community know that they don’t have to pretend to be anyone but themselves.

“Don’t worry about making society feel comfortable,” she says. “It’s OK if they squirm, it’s OK if they feel that they don’t understand you. You gotta live your life out loud. That’s when you’ll find happiness and yourself.”

And that's a philosophy I think we can all get behind.