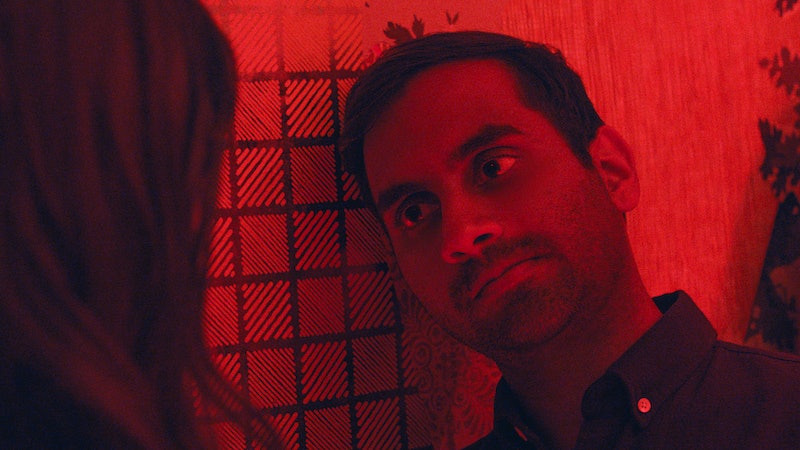 After more than a year (Season 1 debuted in November of 2015), Aziz Ansari's delightful Netflix comedy Master Of None finally returns for round two this weekend with more family drama, more gourmet food, and more hilarious guest stars. In fact, the Master Of None Season 2 guest stars are one of the best things about the new batch of episodes, surprising viewers with some extremely high-profile names putting in memorable appearances in small roles.

You'll remember that Season 1's terrific guest stars included Homeland's Claire Danes and The Americans' Noah Emmerich as a woman Dev has a fling with and her husband; Archer star H. Jon Benjamin as Dev's fellow actor on the set of The Sickening; and Busta Rhymes as a fictional version of himself. Viewers were also introduced to Ansari's delightful real-life parents, Shoukath and Fatima Ansari, who play Dev's parents on the show; thankfully, they'll show up again to provide even more awkward humor in Season 2.

How could Ansari possibly top those indelible cameos? Well, with even more famous celebrities, whose presence on Master Of None prove that the Peabody Award-winning series continues to be a sought-after gig for performers of all stripes — TV actors, movie stars, and musicians alike. MILD SPOILERS AHEAD.

Ansari's biggest coup of the season is undoubtedly getting Oscar nominee, Emmy nominee, and Golden Globe winner Angela Bassett to guest star as the mother to Lean Waithe's Denise, in an episode in which Denise decides to come out to her family. This is the first time Ansari and Bassett have worked together, but Bassett is no stranger to television, having previously guest starred on comedies like Get Smart, The Bernie Mac Show, and The Simpsons, not to mention her recent roles on the past four seasons of American Horror Story.

As Chef Jeff, a globe-trotting Anthony Bourdain-like gourmand, Bobby Cannavale certainly makes an impression in Season 2. Like Bassett, this is Cannavale's first time working with Ansari — but he's been guest starring on all of your favorite shows for years. He has won two Emmys (one for his supporting role on Boardwalk Empire and one for his guest turn on Will & Grace) and was nominated for two more for his guest performance on Nurse Jackie. He has also popped into episodes of Modern Family, Louie, Six Feet Under, Sex And The City, and more.

Who's that John Legend-esque singer crooning a cover of Michael Jackson's "I Can't Help It" at a dinner party Dev attends? Funny you should ask, since it's actually John Legend. While the musician has appeared as himself as a contestant or performer on many reality competition shows like Dancing With The Stars, Lip Sync Battle, and Hollywood Game Night, this isn't his first time guest starring on a scripted series, either. Previous cameos include Curb Your Enthusiasm, Royal Pains, and, of course, La La Land. (It's possible that Legend and Ansari met while working on the 2014 Esquire documentary How To Make A Man, in which they both appeared alongside the likes of Kevin Bacon, James Franco, and Samuel L. Jackson.)

The memorable masked movers of Jabbawockeez — best known as the winners of Season 1 of America's Best Dance Crew — pop up for a surprise performance in Season 2. Although they've obviously performed on television many times since their victory in 2008 (on So You Think You Can Dance, Dancing With The Stars, and the Emmy Awards, among others), this will technically be the group's first-ever appearance on a scripted series. I say "technically" because they actually performed in a scene in 2008's Step Up 2: The Streets that was cut from the movie.

Fan favorite Orange Is The New Black star Danielle Brooks made a splash in Master Of None Season 1 as Dev's pushy agent Shannon on the instant-classic episode "Indians On TV." Well, I'm happy to report that she returns to reprise her role in Season 2; double the Taystee, double the fun! (You may also remember that Brooks guest starred in Season 3 of Girls as Laura, a struggling lesbian who Jessa met in rehab in the episode "Females Only.")

Trust Master Of None to save one of the best for last. Iconic TV star Raven herself pops up in the Season 2 finale to play a talk show host — which feels appropriate, since her and Ansari's sole appearance together prior to this was when he appeared as a guest on The View in a 2015 episode. Between her hosting duties on that talk show and preparing for her upcoming sitcom Raven's Home, the actress has been guest starring on TV shows left and right, popping up in episodes of Empire, black-ish, RuPaul's Drag Race, Nashville, and more.

It's going to be hard for Ansari to top this roster of guest stars with a possible Master Of None Season 3… but I'm sure he'll find a way.