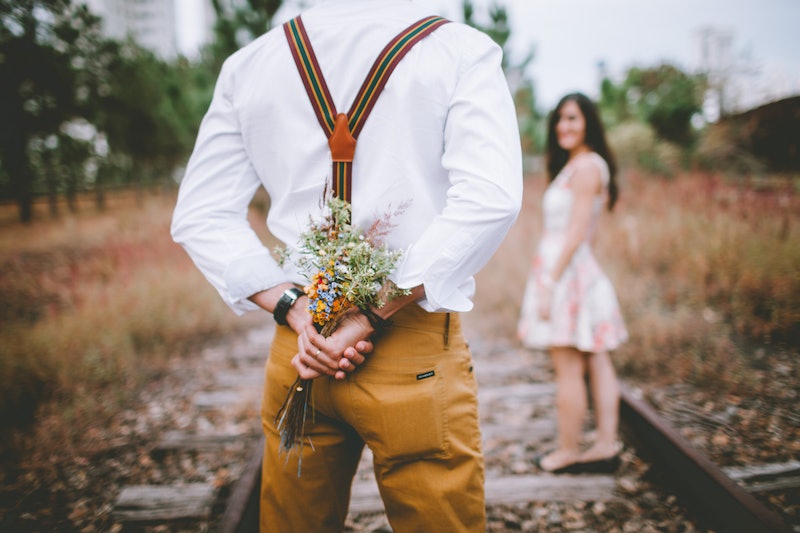 There's a lot of talk about which dating trend is the worst. Ghosting, breadcrumbing, benching, the slow fade — there are a lot of options and they are awful. But the new dating trend love bombing takes the cake. Because it's way more than a dating trend. It's setting up the ground work for manipulation and even abuse.

First, you need to understand what love bombing it is. It's when a relationship that starts out as too good to be true right from the start — the too much, too fast ones? They send you flowers every day, they're obsessed with you, and it's just one grand gesture after another.

"Personally I think that love bombing in and of itself is a key sign that something isn’t right," relationship therapist Aimee Hartstein, LCSW tells Bustle. "People can become infatuated with each other very quickly which is fine. But if someone starts showering you with so much love and attention too quickly, you have to question their pacing and their judgement. This person doesn’t know you. What exactly is missing form their life that they are throwing themselves into a romantic attachment so quickly without having time to assess fully how you are."

So that might be bad enough, but the true motivation behind love bombing is even worse. Honestly, when one partner comes in that strong and showers you with effort and gifts they're often trying to establish themselves in a certain light. And it's dangerous for a few ways.

It Messes With Your Emotions

First, that level emotion messes with your emotions. It makes everything really heightened and puts you in a really vulnerable place. "Some people do like to have relationships this way," Hartstein says. "When two people immediately decide they are involved, they sort of skip over the stressful part of 'will [they] call?' , 'do they like me?', 'are we really dating?'. Some people have trouble tolerating these sort of unknowns. But the truth is, the love bomber doesn’t know you and you don’t know them." So you're having all of these really intense feelings and investing all sorts of emotional energy in someone that you don't actually know.

They Withdraw That Level Of Affection At Will

And what goes up, what comes down. The love bomber establishes this level of affection just so they can take it way. And that's messed up. When someone who is normally showering you with praise and gifts suddenly withholds, it's completely cruel. It makes you feel small, confused, and exposed. And remember, this is after you've invested a lot into the relationship yourself.

They Use It To Control And Coerce

The worst part about love bombing is that it's all about control. People use it to keep the other partner feeling indebted to them. By withholding affection, they have a great guilt-trip mechanism. So when you want to do normal things— like see your friends or do something without them— they can flip the switch and make you feel like the worst person in the world. And plus, they have this history of being a devoted partner, right? So it makes you doubt the idea that they could be the problem, because they've showed you so much devotion in the past. It puts you on totally unsure ground and gives them the upper hand. To be honest, it's more like gaslighting than just another dating trend.

Sure, all of these dating trends are crappy. They are inconvenient, they leave you confused and frustrated, and they can mess with you. But not like love bombing. Love bombing makes you vulnerable and prone to manipulation and even abuse. It's in a horrible league all of its own.