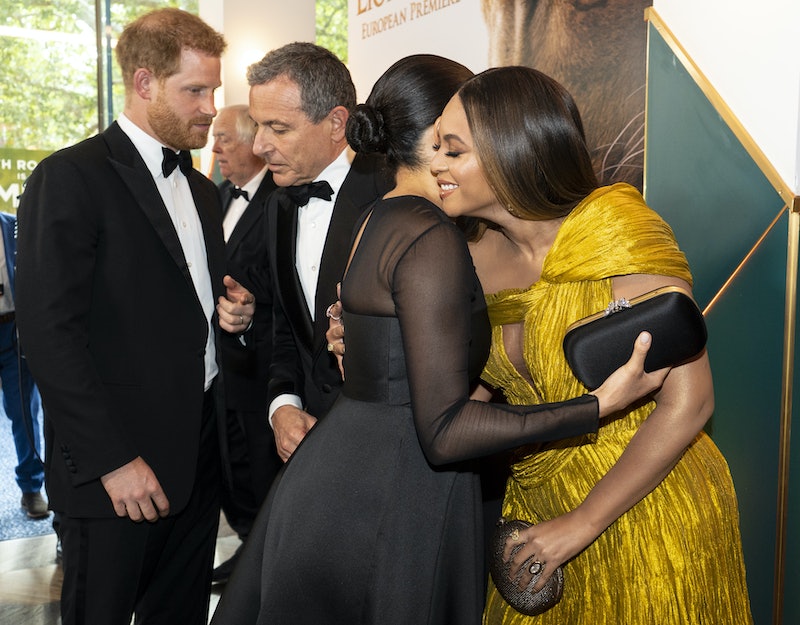 Meghan Markle's rise to international stardom may seem overnight for some, but for me, she's been like a virtual big sister for practically a decade. That's likely because the Duchess of Sussex and I both come from mixed-race backgrounds, were raised by single Black mothers, and even share a birthday. (If you know me well, you know that's my favourite fun fact.) We're both fairly laid back, but that takes a backseat when it comes to issues of social justice and feminism. And yes, we both do that subtle hair tuck move that Joey Potter made famous in Dawson's Creek.

So when Markle met Beyoncé at the London premiere of The Lion King on July 14, my world stopped, literally. One of my former interns — who had a “What Would Beyoncé Do” sign at his desk during his time at Bustle — sent me a Twitter alert with the words, “Are you seeing this?”

When I logged on, my heart almost stopped. My eyes welled up over the .GIF of Beyoncé hugging my big sister in my mind, and mouthing the words, “My princess.”

I've been a fan of the royals practically since birth. My mom was a huge Princess Diana fan, and she celebrated Princes William and Harry's milestones right along with my very first steps and first days of kindergarten. We watched the news of her death on the small TV screen in my bedroom in 1997. My mom reflected on the passing of someone her own age, and I tried to picture what it was like for the young princes to wake up to the news that their mother had been killed.

And while I was also swept away by Kate Middleton's everyday girl aura, when Markle became a potential royal figure, I was thrilled. Her now-defunct lifestyle site The Tig was a digital mainstay for me, and I loved her human rights-minded Instagram account. But as she found love with Harry and faced so much uncalled-for backlash, my heart started to break for her. I knew that her road to royalty would be one filled with scrutiny, henpecking, and at times, blatant racism. It's difficult enough to deal with daily microaggressions, like being called "difficult" for simply being a Black girl with an opinion, outside of the public eye. To handle the kind of criticism Meghan handles on an everyday basis while also serving as a figurehead to a nation, to me, seems daunting and isolating.

America's reigning music Queen Bey has gone through her own share of backlash. She caused a stir for her "Formation" Super Bowl performance in 2016, where her dancers were dressed in black berets, in the style of the Black Panther party of the '60s that was then considered disruptive and controversial. She wasn't afraid to support Black Lives Matters in videos like "Formation," where she displayed a "Stop Killing Us" sign prominently in the New Orleans-inspired clip.

So when Beyoncé embraced Markle, I felt my own body relax into the embrace. It was an acknowledgment from one of the most scrutinised women on the planet, that Beyoncé saw her. Beyoncé shared her pressure, and Markle didn't have to explain a word of how she felt.

I can only look at pictures, read articles, and pray for the wellbeing of Meghan, Harry, and baby Archie. But I know exactly what it feels like to be young, brown and misunderstood.

At The Lion King premiere, Meghan also got to speak with another of Black music royalty, Pharrell Williams. It's reported that during their exchange, Williams could be heard saying to both the Duke and Duchess of Sussex, "So happy for your union. Love is amazing. It's wonderful." He continued, “Don’t ever take that for granted but what it means in today’s climate, I just wanted to tell you it’s so significant for so many of us.” Meghan reportedly responded, "They don’t make it easy."