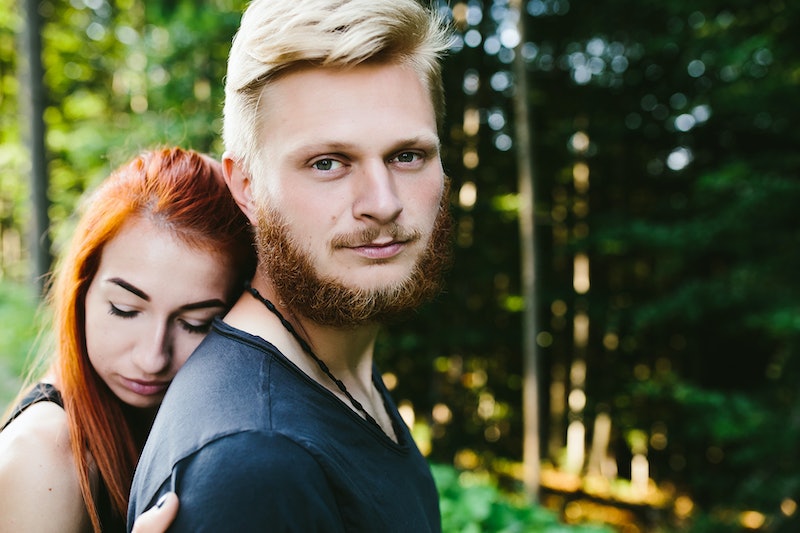 With Valentine’s Day this past week, many "I love you"s were probably exchanged. But who says it first? Well, some experts discovered that men fall in love faster, and express it faster, at least according to a study in The Journal of Social Psychology. The science behind it? It could be biology. In the study of 172 college students, men revealed that they fell in love earlier than women and said so first, but as study co-author Marissa Harrison, told Broadly, both men and women in the study figured women would fall in love and say 'I love you' faster than men.

"Generally, men are seen as less emotional and may not question their emotions as much as women do," Rachel Needle, Psy.D., licensed psychologist and certified sex therapist in West Palm Beach, Florida, tells Bustle. "On the other hand, women are often more likely to analyze their feelings and hesitate before saying 'I love you.' Thus, a man might not actually be in love, but will say it when the feelings are strong and believes that he is. Despite what much of the media and society claims, many men do desire meaningful connections and relationships. They might sometimes fall harder faster, but there is no telling how long that feeling will last." In-te-rest-ing, right?!

What’s The Reasoning Behind Men Falling In Love Faster?

Well, it could be for biological reasons, for one. "I think women unconsciously postpone love compared to men," Harrison said. "Women have a lot more to lose reproductively by committing to the wrong man. They are born with a finite number of eggs, yet men produce millions of sperm on a daily basis."

James Preece, leading Dating Agency expert, has another theory about the men-saying-"I-love-you"-first concept. "That's due to the testosterone flooding mens' bodies and the way their brains are wired," Preece tells Bustle. "Both cause them to focus on the person and situation in front of them based on physical attraction — without questioning whether they are truly compatible. They think they are in love, but they simply just enjoy the idea of being in love. If their needs are being met and they are happy, then they will assume this is love."

Sound familiar? Even as a woman, I can attest to having been in lust sometimes more so than love. But perhaps there's more science to it?

How Biology Is At Play

It would make sense that biology plays a ~big~ factor in all this, yes? Clarissa Silva, behavioral scientist and author of the relationship blog, You're Just A Dumbass, agrees about the biological reasoning. "I really think the key to the gender differences in our attachment styles are due to our biology," Silva tells Bustle. "Men behave the way they do because they can't give birth, so they try to provide material things. Their orientation to the world is far less emotional and more about material acquisition. Women deliver life which is a spiritual experience that makes us more aware of our mortality and our life choices. Women tend to think and act beyond themselves. Both genders seek permanence, stability, and security; but our definitions of these things are sometimes different."

So What Does That Mean In Terms Of Why Men Fall In Love First?

Yes, what's the deal behind men saying, "I love you" first?! Personally, I like it, but scientifically, what does it mean?

I'm still surprised about all the above — in a good way. Thinking back to some of my last few romantic relationships, the guys did say "I love you" first, proving the above theorems right. As you date and fall in love, you can assess for yourself and do your own study, so to speak. In any case, it should be fun "research."

More like this
31 Ways To Celebrate Valentine's Day With Your Long-Distance Love
By Natalia Lusinski and Carolyn Steber
5 Signs You Have A Toxic Relationship With Yourself
By Lexi Inks
17 Valentine's Day Tips For New Couples, Straight From Relationship Experts
By Carolyn Steber
My Partner Wants Me To Wear A Diaper During Sex. Help!
By Sophia Benoit
Get Even More From Bustle — Sign Up For The Newsletter
From hair trends to relationship advice, our daily newsletter has everything you need to sound like a person who’s on TikTok, even if you aren’t.