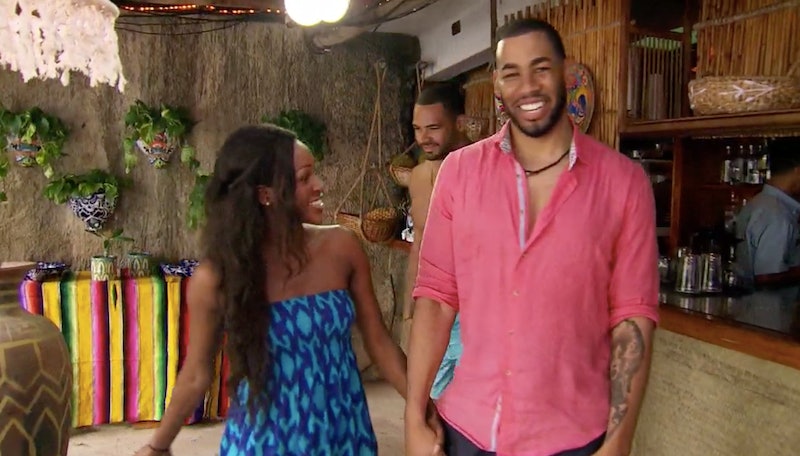 Ever since his heartbreaking separation from Hannah B. on The Bachelorette, fans have been rooting for Mike Johnson to find love, and these tweets about Mike's arrival in Paradise show that they have mixed feelings on how he should accomplish it. Some wish him the best in Mexico, and others think he might have better luck (and let's be honest, more screen time) as The Bachelor.

When word began stirring about the possibility of Mike showing up in Paradise, some were defeated, assuming that meant he couldn't possibly end up as The Bachelor. But Colton Underwood's season disproved the theory that a member of the nation can't do both. So those Bachelor hopels don't have to be disappointed just yet.

Right now, it's unclear whether or not there are any real suitors in Paradise for Mike. But it is clear that everyone thinks he's a stud. Like, for real, the quote, "Mike's a stud" could be turned into a very dangerous drinking game. Onyeka was totally smitten — even starstruck — at the sight of him and hoped to get a one-on-one date with him, but he ultimately ended up asking Caelynn to join him for a romantic night out.

BiP fans who have been following current events closely know that Dean Ulgert eventually shows up on the beach and hits things off with Caelynn, and things must go well for them because there are rumors that they're still dating after the show. That pretty clearly indicates that, although her date with Mike may have gone well, their spark wasn't strong enough to keep them both interested in taking things further.

So far, in the eyes of many, a romantic entrance and an ultimately unsuccessful first date in Paradise both point to The Bachelor mansion. He's said in the past that he takes relationships and love very seriously and doesn't just confess his feelings for anyone, which is another good quality for a potential Bachelor to have.

Fans are definitely keeping a close eye on post-production to see if it hints at the future. In his entrance, he was illuminated by a romantic, angelic halo effect. "Them putting dream sequence on Mike makes me feel like there’s a gigantic chance Mike’s the bachelor," @Daviesallison1A on Twitter wrote. That's not a completely ridiculous assumption.

"Bachelor editors better not mess this up for my boy Mike," @skerft1 on Twitter wrote. "I really hope he is the next Bachelor."

Then, there are the fans that don't necessarily want either of the obvious options for Mike's love life. Instead, they want him to date Demi Lovato. She confessed that she was crushing on him big time during The Bachelorette, and people have been shipping them ever since.

Casting is still looking for suitors for upcoming seasons, so perhaps the "Sorry Not Sorry" singer should apply — it would be the entertainment collaboration of the century. In the meantime, fans will be keeping a close eye on Mike down in Mexico.