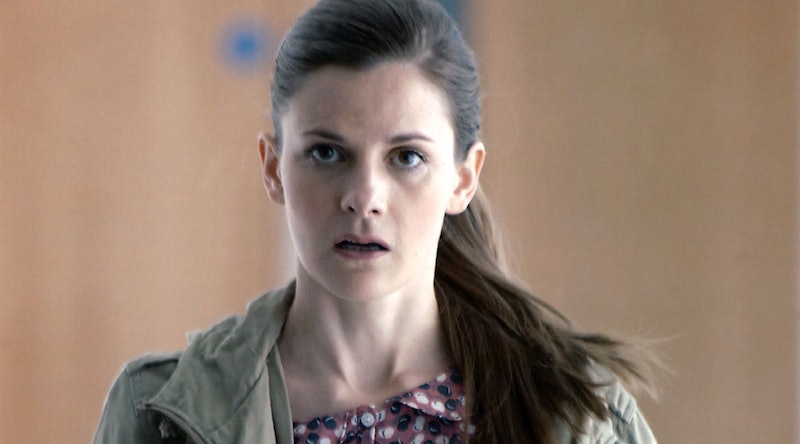 In “The Final Problem,” the season finale of the fourth series of Sherlock, one contentious scene stood out. The fans, cast, and creators alike have many opinions on it. I'm talking, of course, about Molly Hooper's forced love confession to Sherlock Holmes. The scene, which was actually a last-minute addition to the Sherlock script, according to Digital Spy, has polarized the fandom. Many have argued that it seemingly reduces Molly to a one-dimensional lovesick sop. Everyone from creator Steven Moffat to the actor who plays Molly, Louise Brealey, have weighed in on the controversial development — and the opinions are vastly different.

On the Moffat front, I happen to love his female characters, and I see Molly as one of his more complex creations, both in terms of personality and narrative arc — the latter of which is why people are so irked by her scene in “The Final Problem.” Yet I don’t think it necessitates a reductionist view of Molly’s character, despite the implication that Molly has not progressed past her Season 1 self.

Molly starts out as a Sherlock fangirl of sorts, fostering unrequited affection for the great detective. In Season 2, we learn that she is more than her love for Sherlock — she stands up to him, gains his respect, and becomes an integral part of Sherlock’s plan to fake his death. Season 3 moves her further into the "friend zone" (which, in the context of the Sherlock universe, is a huge step for both of them), while establishing that she has a life outside of the pathology lab.

Her character in the Victorian-era Christmas special, “The Abominable Bride,” is the most interesting: “Molly” is known as “Hooper,” the “man” who runs the morgue and takes no sh*t from anyone, least of all Sherlock. When we find out that the whole plot of “The Abominable Bride” is a fiction concocted in Sherlock’s head, it makes Molly’s re-characterization as a man even more fascinating — not because Sherlock would only respect her as a man, but because he now recognizes her inner steel.

In Season 4, Molly is reduced to more of a background character – until “The Final Problem.” The finale episode centers on Sherlock’s secret, psychopathic sister, Eurus, and her desire to understand his “emotional context.” To do so, she puts him through a series of Escape Rooms, presenting him with a different ethical conundrum in each. One room contains an empty coffin, which Sherlock deduces is meant for Molly. Eurus tells Sherlock that Molly’s flat is rigged with explosives, and unless he can convince Molly to say the code phrase “I love you” before the timer runs out, Molly will die.

It’s cruel. In a way, that’s what makes the scene so brilliant. For Molly, it’s a painful phrase to utter “because,” as she says, “it’s true.” And even though Sherlock succeeds – “I won! I saved Molly Hooper!” – the cost is high, and, Eurus explains, unnecessary. She reveals that Molly was never in any danger, so Sherlock hasn’t actually “saved” her, and whatever he thinks he has “won,” he’s now lost much more. “Look what you did to her,” Eurus points out. “Look what you did to yourself.”

Immediately, Sherlock Hulk-smashes the coffin with his fists in a primal rage. It's an indication that — as the entire series thus far has aimed to show us — the most impressive aspect of Sherlock Holmes is not his brain, but his heart. Sherlock is deeply emotional, and it’s gut-wrenching to see him so distraught over causing emotional harm to someone else, someone he used to slight without a moment’s hesitation or afterthought. Now that’s character growth. Plus, this scene is a callback to “A Scandal in Belgravia,” when Sherlock humiliates Molly at a Christmas party, completely blind to her affection for him. Sherlock is surprisingly chastened when he realizes his mistake, and the moment marks an important crack in his emotionless facade.

The scene in “The Final Problem” is so moving because we know how much Sherlock has grown. But it seems that Molly hasn’t changed a bit. In “A Scandal in Belgravia,” she plays the part of the unrequited lover, and she is thrust into the exact same position in “The Final Problem.” Many fans are furious over this static characterization of Molly, a woman who seems to exist only to support the emotional growth of the main, male character. In fairness, the show is called Sherlock — ergo, every character, male or female, essentially exists to support the emotional growth of that main, male character. However, is it fair to say that this scene indicates that Molly is nothing but a stock female character with no internal growth or struggle?

I think not, because Molly is far from being a damsel in distress of yore or a one-dimensional ass-kicking heroine. In fact, what I love most about Molly Hooper is that she turns the dreaded trope of the "Strong Female Character" on its head. Here is an original female character who is pure-hearted yet complicated, emotional yet entirely competent. Though she has some form of a relationship with the main, male character, she also has her own career, dating life, and stressful days unrelated to said main, male character. What stood out to me most about Molly and Sherlock’s exchange in “The Final Problem” was Molly answering the phone with “Hello, Sherlock. Is this urgent? Because I’m not having a good day.” Those six words — “I’m not having a good day” — hint at an entire life outside of whatever’s going on with Sherlock Holmes.

The fact that she is still pining for Sherlock arguably makes her feel even more real. In response to fan criticism on Twitter, Molly actress Louise Brealey tweeted her own assessment of the scene. (The actress views herself as a proud feminist and has been outspoken about women’s rights and her own struggle with body image issues.)

In a post-finale interview with Entertainment Weekly, Moffat addressed fan concern in a rather casual way. “She gets over it!” He then explained that her resolution occurs off-screen, and ends with: “She probably had a drink and went and shagged someone, I dunno. Molly was fine.”

Brealey tweeted that she disagreed with Moffat’s assessment of Molly’s reaction to this scene.

In my opinion, the Molly Hooper scene in “The Final Problem” is supposed to feel brutal, and it feels that way because of the careful development of both Sherlock and Molly’s characters over the course of the series. Still, there's one thing that rubbed me the wrong way: the conclusion to Molly's story. Or rather, the lack thereof.

We witness Sherlock’s agony, but Molly is completely brushed aside. That’s the real tragedy of the treatment of her — not what happened to her within the “emotional context” of the episode, but what wasn’t explored by the writers, who appear to have written any pain she felt off because she supposedly just "gets over it."

When Sherlock is desperately trying to get Molly to say those three words, Molly angrily scolds him: “I’m not an experiment.” Now, within the larger scope of Sherlock, she might as well have been for all the attention that was paid to how she ends up.

More like this
Does 'Keep Breathing's Ending Mean There Could Be A Season 2?
By Kadin Burnett
The 'PLL: Original Sin' Creators Say A’s Identity Will Be “Very Clear” By The Season Finale
By Alyssa Lapid
'The Sandman’s Ending Is A Departure From Neil Gaiman’s Comic Book Series
By Kadin Burnett
Netflix Just Revealed When 'Never Have I Ever' Seasons 3 Will Premiere
By Gretchen Smail and Alyssa Lapid
Get Even More From Bustle — Sign Up For The Newsletter