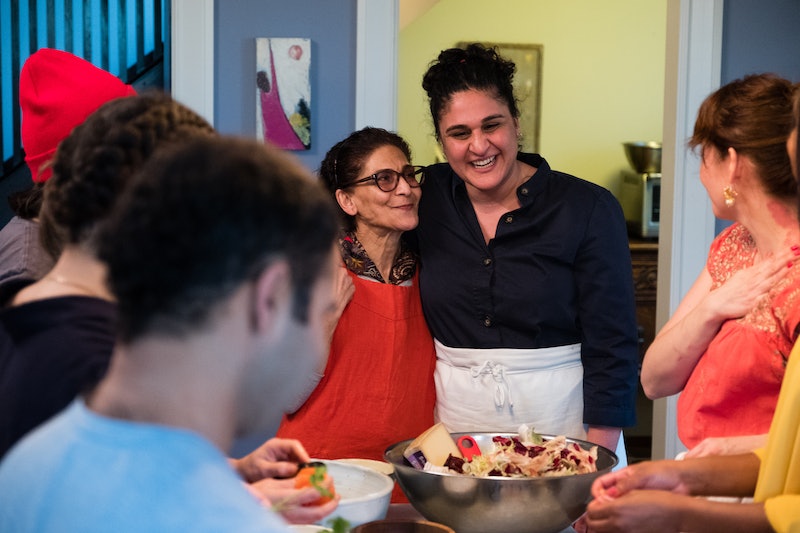 "The secret to good cooking is hiding in plain sight." That's one of the first things viewers hear host Samin Nosrat say on Salt Fat Acid Heat. She's referring, of course, to the four essential elements of cooking right there in her show's title, each of which is given its own episode in her four-part Netflix docuseries. But that quote also sums up how it can feel women’s culinary accomplishments are treated in the food TV space, where they often don't seem to get the same cinematic fanfare as those of their famous male counterparts. On food-centric TV programming, women are mostly relegated to the kitchen, hosting aspirational cooking shows like Barefoot Contessa (which, to be sure, is wonderful in its own right), while men like Anthony Bourdain and David Chang, the host of Netflix's Ugly Delicious, travel the globe palling around with their usually male friends, often other chefs and food writers, taking a deep (and often self-congratulatory) look at the food world.

What makes Nosrat's docuseries so special is it isn't trying to put a female spin on those bad-boy travelogues viewers have become accustomed to. Salt Fat Acid Heat is a delightful and educational travel-cooking show that not only celebrates female chefs for what they do best, but highlights the special skills that plenty of regular people around the world — many of whom are women — bring to the kitchen.

Throughout the series, women's voices are front and center in ways that feel natural yet still revolutionary for the often testosterone-filled culinary travel show genre. Nosrat does her fair share of highlighting the work of female chefs — Nosrat's friend Yuri Nomura shows us how to make the perfect dashi, while Mexican chef Regina Escalante will school you on the uses for sour oranges, for example — but those conversations always feel more like conversations between friends than professional tutorials made for die-hard foodies. It helps that Nosrat is equally excited to celebrate the cooking traditions of average women, specifically mothers and grandmothers whose recipes have become the foundation of so many delicious things.

Episode 1 finds Nosrat in Italy with Lidia, identified simply as “la nonna" ("grandma" in Italian), learning the proper way to make pesto. (Hint: it has a lot to do with the olive oil.) While in Mexico, Nosrat spends time with Doña Asaria, who is referred to as the "tortilla especialista" (tortilla specialist) who makes 250 corn tortillas by hand per day because they just "taste better" than the ones that come from machines. And Nosrat helps Kazumi, the miso master, make miso, a skill that Kazumi says she learned from her mother. It's no surprise, then, that the woman Nosrat invites over next is her own mother, who helps her make Tahdig, a Persian rice dish, in her own Northern California apartment.

While Nosrat is as knowledgeable as they come about food — Salt Fat Acid Heat is based on her 2017 best-selling, James Beard–award winning cookbook of the same name — she's a great listener who always looks genuinely happy to learn from others. She wants to chat with the women who work in the markets, like the one in Mexico who sells the best chocolate (it's lightly covered in her fingerprints since she makes it by hand). Some of the best moments of the show are Nosrat's reactions. The wide-eyed joy she gets from eating gelato in Italy, that pause she takes after drinking olive oil straight out of a wine glass, that pucker she gives while trying a gooseberry for the first time feel so genuine and pure, it's hard not to fall in love with her.

Nosrat's everywoman approach to hosting is why The Cut hailed her “a new kind of Domestic Goddess." But she's one who doesn’t want to rule — she wants to listen, to better understand the traditions and care that goes into everything we eat. Whether she knows it or not, it's also her way of empowering women, especially those of color whose stories aren't normally told on shows like this, which are usually hosted by white men. On Salt Fat Acid Heat, those women's stories are welcome and valued for what they have given to so many even if most don't know it — but should.

Nosrat is the perfect teacher because she doesn’t educate others through authority, but with hands-on passion for what she’s doing and reverence for what others have been doing for centuries. That passion is what makes Nosrat so aspirational, but in a way that actually feels accessible — not to mention, respectful.

Cooking might have once been considered "women's work," but Nosrat shows how hard women work, whether they're chefs or home cooks. While making fresh pasta, she talks about the strain that goes into it, recalling how women invented maneuvers to help them preserve energy while making pasta at home for 20 people.

Eight years ago, The Daily Mail’s Rose Prince questioned whether feminism was killing the art of home cooking because less women were cooking in the home. “Not everyone enjoys the benefit of this nurturing cookery," Prince wrote, "but I did, and I owe a great debt to feminine food.” Nosrat shows that we still owe so much to “feminine food” and the women who make it. That ability to create for oneself and others is powerful, and she doesn't want that power or the women who yielded it to be forgotten.

On Salt Fat Acid Heat, women are chefs, cooks, teachers, historians, inventors, and living food experts that hold the keys to unlocking the secrets to good cooking. Now, thanks to Nosrat, that's much easier to see.