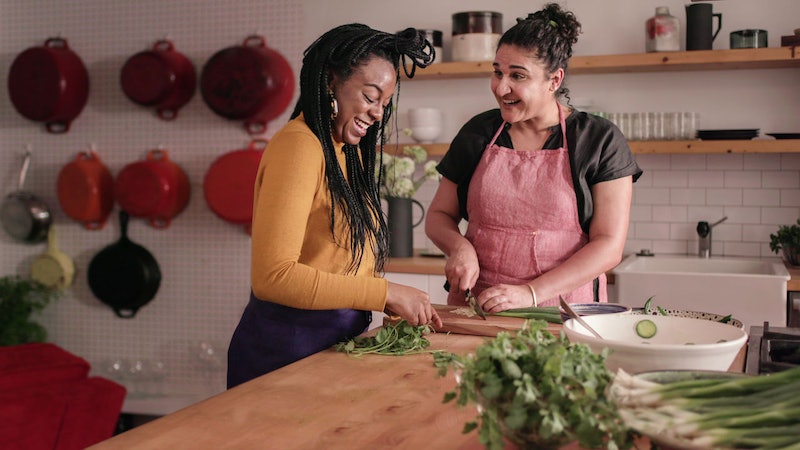 If you’re lucky enough to find a cooking show that stars a woman it's often tiresomely cliché and ends up falling into the domestic goddess trope. She’s an ornamental homemaker or a sweet granny humbly making a simple yet unimaginative dish in kitchen — never outside. On top of that, she’s probably white. While there’s nothing wrong with family-orientated home cooking, women in the culinary world and home cooks alike deserve more than apple pies and family favourites. Food should be about culture, education, adventure, and science — all of which is effortlessly served up in Salt, Fat, Acid, Heat by Samin Nosrat, a Californian chef and food writer.

Based on her best-selling cookbook, every episode is a deliciously deep dive into the four key elements that make food so damn appetising — salt, fat, acid, and heat. Although the new Netflix series is sadly only four episodes long, each is jam-packed with ways in which the viewer can harness new flavours and techniques to become a better cook. Netflix's Salt, Fat, Acid, Heat is so much more than just a drab cooking show, it’s an adventure. Nosrat gives us the basic knowledge and understanding to make informed decisions and enhance our cooking.

Cooking shows are still disproportionately centred around men which sadly mirrors the culinary industry at large. In the U.S. only 4.7% of chefs are women. So, watching through the lens of a woman of colour, an Iranian-American woman, changes the whole dynamic of the show. People of colour are responsible for so many of our beloved cuisines in the West, yet we are rarely ever represented in cooking shows except, of course, fleetingly as quaint cooks living off the land. Often these adventurous documentary-style cooking shows centre around white men travelling through the world, often with a patronising, paternal attitude. They get the locals to teach them how to cook, before ignoring everything they’ve learned and making a blander twist on established dishes.

But when Nosrat travels to Italy, Japan, and Mexico it feels like a cultural exchange. Regularly, she nostalgically recalls how the flavours she encounters are similar to those in her own culture — even bringing in her Iranian mum in the final episode to cook. Nosrat hops into boats, fluently speaks a plethora of languages and gets stuck in, taking us far beyond the kitchen. From making soy sauce in Japan to olive oil in Italy, it’s all done respectfully and with purpose. She lets the locals speak for themselves and really learns and listens to their stories and cooking techniques.

Salt, Fat, Acid, Heat gives us a sense of unashamedly embracing and enjoying food outside of the context of cooking for family, work, or necessity. Nosrat doesn’t timidly try small performative teaspoons of food, she gets stuck right in and munches, slurps, and chews her way around four continents. In a diet-obsessed world, having a woman come along and prove food is about pleasure is so wonderful, especially when the media continues to shame women for liking food. The constant bombardment of low-fat yogurt adverts featuring women randomly giggling at their little dessert pots or celebrities swearing lollipops will help you shed pounds is utterly boring. For women, food is vilified and portrayed as something we should fear or track meticulously, yet someone like Action Bronson from F**k That’s Delicious is given the agency to just indulge and appreciate flavours. Now, having Nosrat come along and tell you fat is delightful, and salt is the single most important component of good cooking is like a much-needed exhale.

Nosrat’s eagerness to learn and her raw admiration for cooking is what makes Salt, Fat, Acid, Heat work. There’s never a moment where the audience feels patronised or belittled for being lowly home cooks in comparison to culinary gods. Not only does she teach us the importance of seasoning food, or how acidic notes perfectly compliment salty flavours, she too learns along with us.

The information she offers is useful, concise and backed up with research and science. This is the kind of instructional cooking show we’ve desperately been yearning for. She takes us out into the world and shows us on a large scale how these elements alter food, before honing in and explaining how we can utilise them in our day to day cooking. You're not being told to bankrupt yourself searching for samphire, saffron, or a sous-vide cooker, instead Nosrat explains how to improve your skills with the ingredients you’re already cooking with. Everything she does feels so achievable — most people can get hold of salt, lemon, or butter after all.

The new dawn of cooking shows isn’t about pre-measured ingredients and being glued to the stove. Its about knowing how food is made and the people behind it. Salt, Fat, Acid, Heat is certainly spicing things up with well-rounded inclusive cooking and necessary knowledge. It’s for everyone no matter your skill set or culinary ability. I can’t wait to see more of Samin Nosrat cooking on my TV screen.