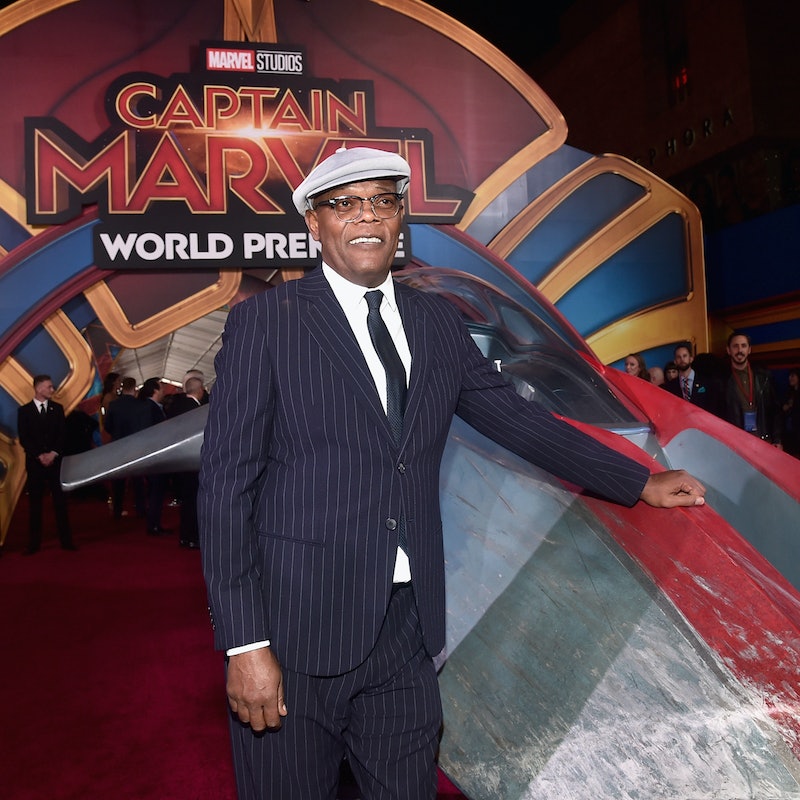 Anyone who stuck around after the Avengers: Infinity War credits rolled knows that Samuel L. Jackson's Nick Fury summoned Captain Marvel's titular superhero AKA Carol Danvers just in the nick of time. His S.O.S. call via a special pager, of course, laid the groundwork for the newest installment in the Marvel Cinematic Universe. What it also did is raise a valid question: Why did Nick wait until Thanos began turning him, Maria (Cobie Smulders), and oh, just half of the rest of the world to dust before he pulled the proverbial trigger? Let Jackson explain.

"She said only in emergencies," the actor shared of his hesitance to call upon Captain Marvel herself (played by Brie Larson), in an interview with IGN. He continued:

"Other emergencies could be handled by the people who were present. It’s just an alien invasion, that’s something that could be handled. Half the population wasn’t dying and flicking off and doing whatever. We finally have an emergency that I feel warrants her presence. This is unprecedented. How are you gonna fight that? I can’t fight that. If I’m not here, I need to find someone to come here who can handle it. All those people are ineffective. They’re great for normal, everyday world disaster. But intergalactic badass who has all the Infinity Stones needs a bit more."

Captain Marvel's co-director Anna Boden had her own theory as well. "He's not gonna bring it up unless, like, it's something he really can't handle because he doesn't want to, you know, let other people know about her existence," she theorized to IGN. "That could be a bigger security threat."

Yes, Agent Fury's last-ditch effort laid the groundwork for March 8's Captain Marvel release, which, of course, serves as Danvers MCU origin story — but also reveals plenty about Fury's past as well. Set in 1995, decades before before Avengers: Infinity War, moviegoers will even get to find out what's behind Fury's iconic look.

"You'll see, specifically, the origin of what happened to his eye," Jackson told Entertainment Tonight. "You'll find out that he does have a family, that's referenced. You don't see them, but they are referenced in another way. There are things we talk about in his backstory that haven't been talked about before — where he's from, what he's done."

He also explained the differences between the MCU version of Fury versus the original comic version to ET:

"There are specific things that are documented about his backstory, back when he was a white guy fighting in the war. [Laughs] I've been reading Nick Fury since I was a kid, so there are a lot of things that I know about him and about his origin story and the people that he fought with and who he knew before all that happened. And then by the time we got to the Ultimates Nick Fury, all of a sudden [he] turns into me, out of nowhere, because of [comic book writer] Mark Millar, and we start a whole new kind of backstory timeline."

Now, fans are about to find all of that out in Captain Marvel — and much, much more.