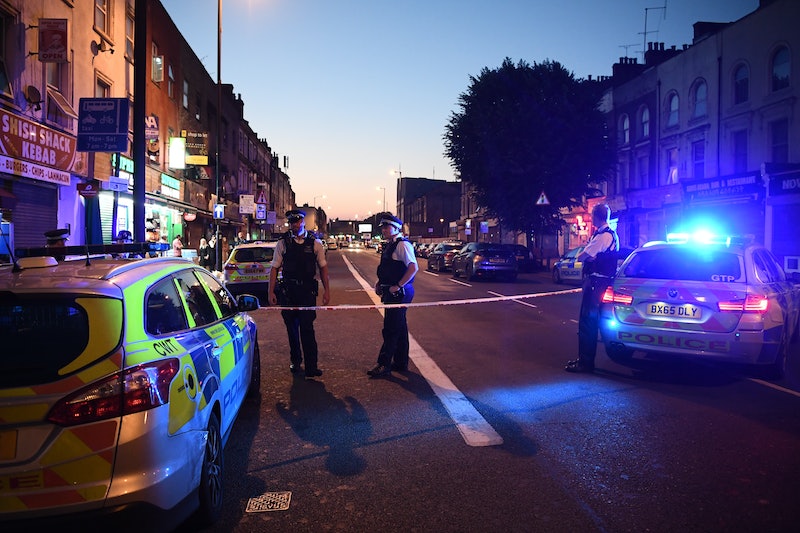 Londoners woke up to another tragedy this morning — this time a terrorist attack at a Finsbury Park mosque. A van drove into worshippers as they were leaving the mosque last night, killing one and injuring at least 10, according to the London Metropolitan Police. And while the horror of this crime is no different than other terrorist incidents, many have noted and been angered at the different type of media coverage that it has been receiving — so different, in fact, that people are calling for clean-shaven white men to condemn the attack.

Firstly, there is the issue of calling this what it was — terrorism. The London Metropolitan Police issued a statement this morning saying that the incident is, in fact, being treated as a terrorist attack. The attacker targeted a mosque, knowing that during Ramadan it would be crowded, knowing that people would be leaving evening prayer. But the initial reports were calling the event an "incident" or a "major incident", avoiding the use of the word terrorism. Now, on the one hand, there is always a delay before the police confirm that any attack is terrorism — and that makes sense, because they need to be sure. But many were rightfully angry that the media seemed reticent to use to the word "terrorist" so readily when the terrorist attack involves a white man attacking Muslims.

This was made worse by the description of the terrorist that certain media outlets were running with. Namely, the inclusion of the seemingly ridiculous details that he was clean-shaven. The Daily Mail even tweeted, "Clean-shaven white man arrested by police as at least 10 people are injured". Really?

Why not call this man what he is — a terrorist? Don't worry, this Twitter user fixed it:

Some wondered if this was just a way of distracting from the fact that he was white. Rather than just saying that a white person can also be a terrorist and Muslims can be — and so often are— victims of terrorism.

And others were quick to point out another huge disparity in the way that this attack is being covered. When terrorist attacks are committed by someone bastardizing the Muslim faith, many often wonder why the Muslim community doesn't condemn and disown them — as though millions of people are somehow responsible for a violent fringe network of their religion. Of course, many of them do disown them publicly without being asked, but they shouldn't have to. Forcing them to associate their religion with that type of violence is a disservice to the religion and the millions of peaceful followers of it.

We don't, of course, demand the same of white men when one of them shoots up a school of a movie theater. We don't ask why we weren't warned by them or ask them what they are doing to prevent it. And it turns out, we don't do the same thing when a white man commits a terrorist attack.

In fact, some have stepped up to the plate just to point out this hypocrisy.

So come on, clean-shaven white men of the world. It's time to speak up. Because terrorism is terrorism — this attack is just horrific, nonsensical, and cruel as any other. And it should be treated — and reported on — in just the same way.

More like this
25 Quotes About Love To Share During Pride Month 2022
By Madeleine Aggeler and Emma Garza
How To See The Lunar Eclipse On May 15-16, 2022
By Kaitlyn Wylde
Photos Of Boris Johnson Drinking At A Downing Street Lockdown Party Have Surfaced
By Bustle UK
What The History Of Pride Month Means For Celebrations Today
By Jay Polish
Get Even More From Bustle — Sign Up For The Newsletter