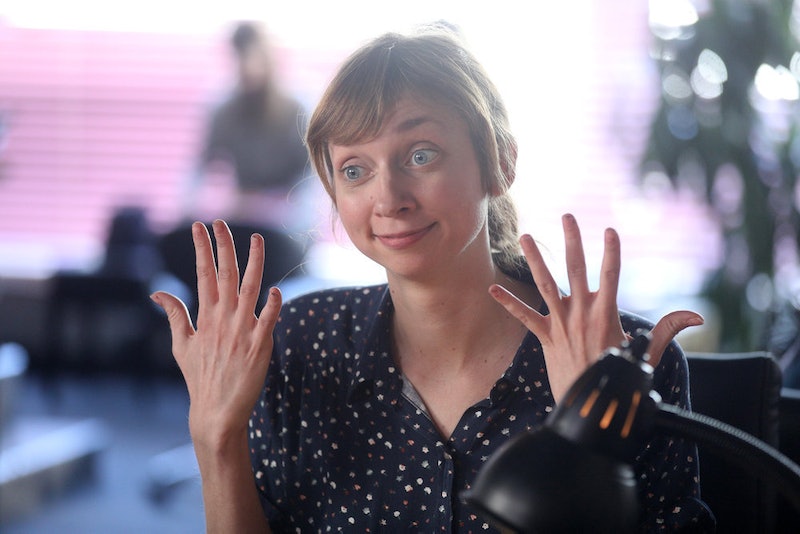 Warning: spoilers ahead for the Season 3 finale of Good Girls. Rio is no longer the women's only problem on Good Girls. At the end of the Season 3 finale, FBI agent Phoebe Donnegan approaches Beth, Ruby, and Annie at the park in an apparent ploy to get closer to them. As far as Ruby knows, Phoebe is just some woman she gave a manicure; really, she's been gathering information to try and take down their counterfeiting and money laundering business. But showrunner Jenna Bans and executive producer Bill Krebs hint that fans shouldn't worry too much now that Phoebe is closing in.

"Phoebe really becomes almost a friend of Beth's and she becomes very different than the threat [Agent] Turner presented to them [last season]," Bans tells Bustle.

Though Krebs says that Beth in some way represents the "cool girl" Phoebe has resented since high school, "she's also fascinated by her ... and by the friendship the three women have. And she wants a piece of that," Bans explains. Eventually, Beth and Phoebe really "start to rely on each other both personally and professionally in a really interesting way."

Could those feelings get in the way of Phoebe's investigation, or even cause her to end it altogether? That's a question we likely would have seen play out this season if production on the show hadn't been shut down amid the coronavirus pandemic in March. Instead, Bans and Krebs were forced to temporarily shelve the five remaining planned episodes.

But Krebs says that he thinks this episode works nicely as a finale nonetheless. "We've been building the idea of Phoebe... throughout the season to have her kind of come into their world and to sort of infiltrate their little gang," he says. "It felt like a very satisfying moment for us because it opens up the possibility of, 'Now what's going to happen?' And that felt like it teased a good sort of jumping off point for a Season 4."

NBC hasn't officially renewed Good Girls for Season 4, but if that call is made, Krebs and Bans have a clear idea of where the story will pick up between Phoebe and Beth. Says Krebs: "A lot of our juicy material will come right out of the gate."

More like this
Twitter Is Burning As Phoebe Dynevor Reveals Daphne’s 'Bridgerton' Exit
By Sophie McEvoy
The Plane Crash In 'Dear Edward' Is Based On A 2010 Tragedy
By Grace Wehniainen
'That '90s Show' Is Officially Coming Back For Season 2
By Gretchen Smail and Grace Wehniainen
This 'One Tree Hill' Wardrobe Error Is Going Viral On TikTok
By Brad Witter
Get Even More From Bustle — Sign Up For The Newsletter
From hair trends to relationship advice, our daily newsletter has everything you need to sound like a person who’s on TikTok, even if you aren’t.