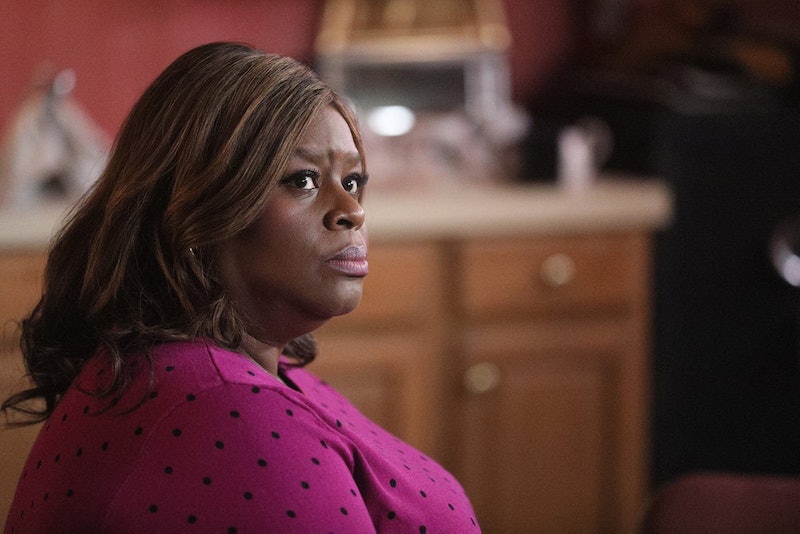 Spoilers ahead for Episode 10 of Good Girls Season 3. Beth may have a hit out on Rio, but the person the FBI is zeroed in on is Ruby. At the end of the April 26 episode, Ruby, feeling guilty, bought a car (in cash) for the family of her daughter's kidney donor. This raised red flags for the FBI unit tracking their counterfeit money ring, and when they realized that Ruby also worked at a nail salon known for selling the polish used in the counterfeiting process, they made the connection.

The next episode is also the Season 3 finale, and the synopsis teases that the FBI comes dangerously close to nabbing Ruby for good:

"Beth and Dean offer to buy Four Star Pool & Spa from Gayle and Dean is determined to make this a legitimate business. Tensions rise between Ruby and Stan and culminate in our trio making a drastic decision. Phoebe gets even closer to cracking the case when she gets her hands on Ruby's phone."

It seems like Ruby's capture may be the cliffhanger that comes after FBI Agent Phoebe finds evidence on her phone. As for tensions rising between Ruby and Stan and the trio making a drastic decision, that could all lead to one thing that's almost happened before: Ruby turning Annie and Beth in to save herself and her family.

Last season, Ruby almost gave her friends up twice — once at the beginning when it looked like Beth's DNA on the pen was going to convict them all, and then again later in the season when FBI Agent Turner revealed that he didn't want Ruby or Stan, he just wanted Beth. Both times Ruby considered putting her family above her friends, but both times she was able to find a way out of the jam that let them all stay out of prison. This time may be different.

Ruby has struggled all season with wanting to be a good person and yet still finding herself committing crimes in order to make ends meet. In Episode 10, when meeting her daughter's donor family, she saw how grounded and kind they were and asked Stan how they could ever be that good again. Perhaps turning herself and her friends in is one way for Ruby to course correct. After all, Ruby didn't really even want to get re-involved in counterfeiting this season. At the end of Season 2, when Beth excitedly revealed that they could do it without Rio, both Ruby and Annie looked pretty apprehensive. "I think they're both a little gun-shy, and Beth is the one who is sort of rushing head first back into the fire," Good Girls creator Jenna Bans told TV Guide ahead of Season 3.

Retta, who plays Ruby, told TellTaleTV that what she really wants is for her character to walk away. "In my heart of hearts, I want Ruby out. I'm so stressed for her. I don't want to ruin her family life," Retta said.

When Turner was on the case, he wanted Beth — the mastermind — to go down, not Ruby. Phoebe likely wants the same. If Ruby cooperates, she'll likely get a better deal, and it would really take care of two problems in one. It would get Ruby off the hook and also get Beth out of the picture, considering she's the one who is constantly getting Ruby mixed up in more illegal activity. Without her, Ruby could finally make a go at the good, honest life she wants. At the very least, it would be a tempting offer.