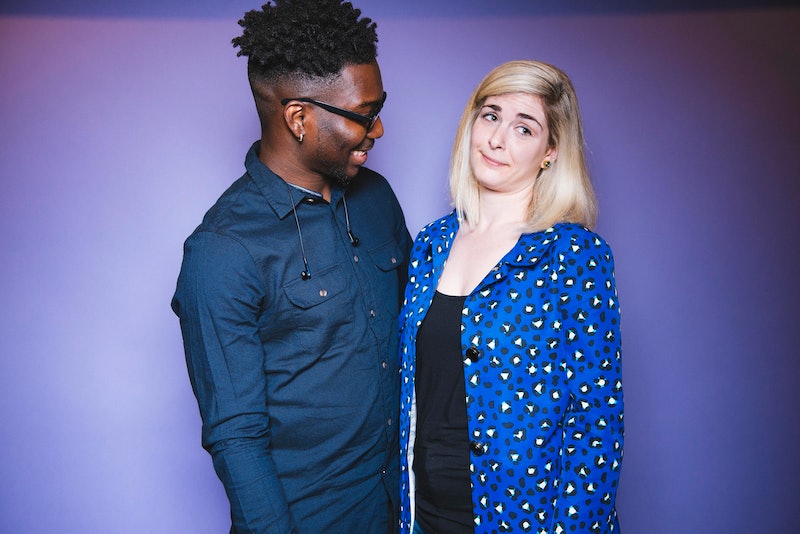 If you ever thought that playing hard to get or seeming like you were disinterested in someone was the key to winning over a romantic interest, it may be time to think again. Though we often associated an air of mystery or uncertainty with romance and excitement, new research shows that actually, it might be exactly the opposite.

According to a new study published in Computers in Human Behavior, being on the fence about a potential mate can have a major effect. And it's a much bigger turn-off than a turn on.

The study authors ran six interrelated studies, some of which were experiment based and some of which were based on diary entries of the participants. In one study, 100 men and women were shown a photo of a "chat partner", who they were told was located in a different room. At the end of their chats, some people received a final message from the partner while others were left without a final message — and in a state of uncertainty. Then, participants were asked to rank their "chat partner's" sexually desirability — those with more certainty ranked their partner as more sexually desirable than those without it.

“I thought that uncertainty might instigate sexual interest in a new partner when it is combined with cues of this partner's romantic interest (when this partner gives hints that he or she is interested in the participant)," Lead author Gurit Birnbaum, a social psychologist and associate professor of psychology at the IDC Herzliya, tells Bustle. "In such cases, participants' rejection fears might be alleviated and the initial uncertainty they experienced might increase the pleasant effect of hoping for future interactions with this partner."

In one of their other experiments, they looked at participants in relationships — and again found that certainty was a good thing, as more certainty about where you stood with your partner was linked with a higher sexual desire for them.

But to plenty of relationship experts, this isn't a surprise. "There is tons of research on how suppressing your emotions backfires and ... acting disinterested would likely prove off-putting," clinical psychologist Jennifer L. Taitz, PsyD, ABPP tells Bustle.

And it makes complete sense — putting yourself out there can make you feel vulnerable and uncertain. But if you know that the other person is interested — or at the very least, if they seem interested — you know that you're less likely to feel embarrassed by rejection.

So playing hard to get just isn't the best option, scientifically speaking. But you also might not want to lean too far in the opposite direction. "I'd not recommend playing hard to get with a specific person you wish to interest because this may arouse this person's rejection fears and decrease your appeal," Birnbaum says. "Still, expressions of romantic interest should be reciprocal and gradual. Otherwise, they may backfire. Expressing too much interest, too soon may deter the other person as you might be perceived as desperate or as non-selective. It would be good to create the impression that you are selective in your romantic choices and thus worth pursuing."

Why Authenticity Matters In Dating

But there's another reason why playing hard to get just isn't the best move — it's incredibly disingenuous. “You run the risk of not being genuine or authentic with yourself. It’s a defensive strategy — you’re not letting yourself be vulnerable and in order to have or develop intimacy in a close, loving relationship, vulnerability is a necessary condition,” Clinical assistant professor, Department of Child and Adolescent Psychiatry at NYU Langone Medical Center Francesco Ferrari tells Bustle. “Any time you’re putting a defense up or a wall up, or you’re not allowing yourself to be vulnerable. I think that you’re essentially blocking yourself from developing a truly intimate relationship.”

If you play hard to get and don't act like yourself, what kind of relationship is going to develop out of that? If the other person is interested, against the odds, they're going to be interested in a person who isn't the real you. It's better to just be yourself — openly, honestly, and directly.

It turns out that an air of mystery isn't so much a turn-on — and that it's all about rock-hard certainty. So, if you're wondering whether or not you should text someone you're into or leave them hanging, send the damn text.