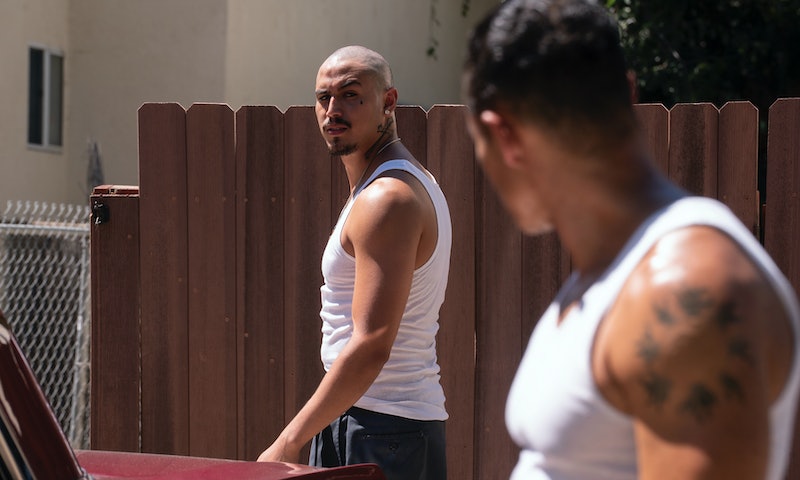 Perhaps the most surprising plot point of On My Block Season 3 was the fact that Cesar's older brother, Spooky, got a happy ending. But while his character may have been a hardened Santos member, Julio Macias, who plays Spooky in On My Block, is the polar opposite. He has a full head of hair, for one, and his normal speaking voice isn't the gravely baritone that audiences are familiar with.

In addition to the Netflix series, Macias has played small roles in Jane the Virgin and the TV series S.W.A.T. However, playing Spooky was his big break, and he told the site mitú that the character helped him connect to his Mexican roots. "So far in my career, [Spooky] is by far the best character," Macias said, explaining that On My Block allowed him to be part of a larger cultural conversation — something that Macias had previously shied away from.

"As a Latino, you try to blend in and incorporate yourself even as an actor," he told mitú. "I just wanted to be an actor, not like 'that Mexican actor or Latino actor.'" But after he began playing Spooky, he asked himself, "'Why didn't I lean into it before?' This role opened up my understanding of who I am and my culture and my place in all of this."

On My Block has also opened up professional doors for the actor, and Macias will play one of Selena Quintanilla's band members, Pete Astudillo, in the upcoming Netflix series about the late Mexican-American singer. Macias will star alongside Christian Serratos, who plays the titular singer. "There are glimpses of Christian where I'm like, 'Yo, are we singing with Selena right now?'" he told People en Español. "It's surreal."

The actor continued, recalling that his cousins often played Selena while he was growing up after his older relatives had finished blasting Pepe Aguilar and Luis Miguel. "It was a younger vibe when Selena's music came on — that's when the party started," Macias told the publication. "¡Orale, a bailar! In Mexico, people still talk about Selena like she's alive, like she's part of our community, maybe because we celebrate El Día de Los Muertos and know that there is life in the afterlife."

While Macias was quick to praise J.Lo for her performance in the '97 biopic, he explained to People en Español that the film "was just a quick synopsis of everything Selena was, and Selena's story is about all of the Quintanillas."

The actor also told People that he didn't know that dancing would be such a big part of his upcoming role. Indeed, it's difficult to imagine Spooky listening to Selena — let alone singing and dancing. Perhaps in Season 4?

More like this
'That '90s Show' Star Callie Haverda Got Advice From Mila Kunis & Ashton Kutcher
By Brad Witter
Ashton Kutcher Wants Danny Masterson “To Be Found Innocent” In Rape Retrial
By Jake Viswanath
'The Queen’s Gambit' Season 2 Tweet Wasn’t From Anya Taylor-Joy
By Mary Kate McGrath, Jack Irvin and Grace Wehniainen
'The Crown' Season 6 Has Suspended Filming "Out Of Respect" For The Queen's Death
By Bustle Staff
Get Even More From Bustle — Sign Up For The Newsletter
From hair trends to relationship advice, our daily newsletter has everything you need to sound like a person who’s on TikTok, even if you aren’t.