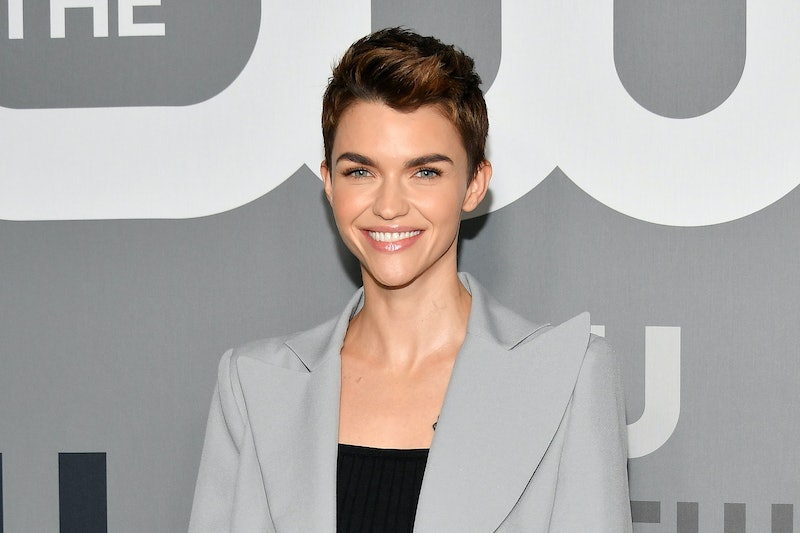 Although her character on The CW's Batwoman will be the first out leading lesbian superhero on TV, Ruby Rose is rejecting Batwoman's "lesbian superhero" label. “Her being gay, it’s definitely part of who she is, and it's definitely part of the story and establishing why she's not in the military anymore," Rose explained in an interview published on Sept. 18 as part of Glamour's TV Issue cover stories. "But the show is not about a gay superhero. It’s about a superhero.”

The actor noted that her reasoning is rooted in her own offscreen experiences. “I was always Ruby Rose, the lesbian MTV VJ, the lesbian model, the lesbian actor,” she shared in her Glamour profile. “I was like, That's not a part of my job. That's not on my business card. I didn't study to do that, did I? . . . I was getting frustrated at always having to have my sexuality be a part of it, like, you’d never say, ‘the heterosexual DJ.’ That’s bizarre.”

That is not the only parallel fans will see between Rose and Batman's cousin Kate Kane when Batwoman premieres on Sunday, Oct. 6. As the native Australian added to Glamour, she and her character both came out at a young age (Rose was "around 11 or 12" when she came out) and they each "paid sort of different but similar prices to doing that.”

After the news broke in Aug. 2018 that Rose would play Batwoman, there was immediate fan backlash regarding her casting. Criticism ranged from the fact that Rose doesn't share Kate Kane's Jewish heritage to the actor, who has identified as lesbian and gender fluid, not being "gay enough" to play a lesbian character. Before Rose eventually deactivated her Twitter account, she shared one final message, per The Hollywood Reporter on Aug. 12: "Where on earth did 'Ruby is not a lesbian therefore she can't be batwoman' come from — has to be the funniest most ridiculous thing I've ever read. I came out at 12? And have for the past 5 years had to deal with 'she's too gay' how do y'all flip it like that? I didn't change. I wish we would all support each other and our journeys."

In an interview with The New York Times published on Sept. 3, Rose said that she understands that "she can't please everybody" — and that seems to be fine with her. "I'm not going to be on my deathbed one day like, "I wish strangers on the internet that I never met liked me more," she shared. "I'm going to be thinking, "This is so awesome I got to play Batwoman for the first time, and no one else had played her." That’s my legacy and I’m going to own that."

Rose revealed in an Aug. 7, 2018 Instagram that the role "is a childhood dream" come true. "This is something I would have died to have seen on TV when I was a young member of the LGBT community who never felt represented on tv and felt alone and different," she captioned the post.

She echoed those sentiments in an appearance on The Tonight Show Starring Jimmy Fallon pn the same day. "It's a game-changer," she gushed before tearing up. "I feel like the reason I got so emotional is that growing up, watching TV, I never saw someone on TV that I could identify with, let alone a superhero, you know?"

When Batwoman officially debuts, Rose will be living proof of how much representation also matters to her fellow members of the LGBTQ+ community.

More like this
"Lavender Haze" Star Laith Ashley Breaks Down Filming With Taylor Swift
By Jake Viswanath
Ozzie’s Coming Out Scene With Kitty On 'That ’90s Show' Has Twitter Sobbing
By Brad Witter
Linda Ronstadt’s “Long Long Time” Plays A Pivotal Role In The Last Of Us
By Brad Witter
Here’s What Happens To Bill & Frank In 'The Last Of Us' Video Game
By Brad Witter
Get Even More From Bustle — Sign Up For The Newsletter
From hair trends to relationship advice, our daily newsletter has everything you need to sound like a person who’s on TikTok, even if you aren’t.