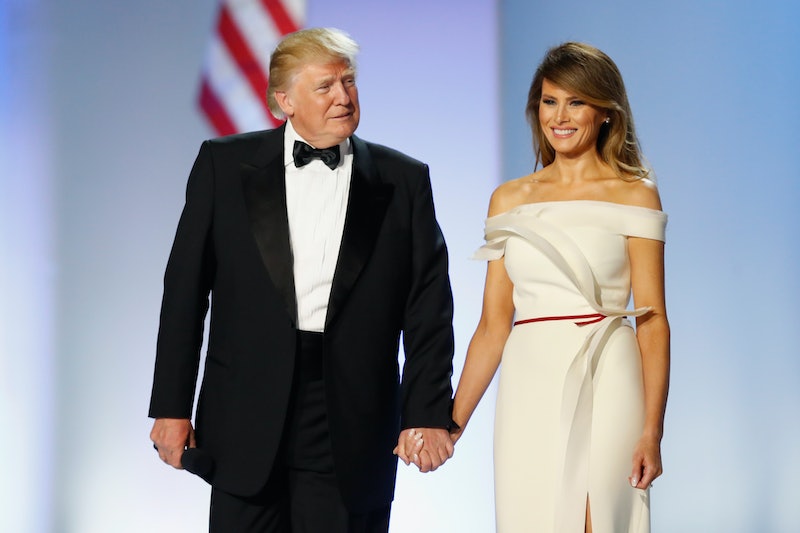 The First Family takes on a huge amount of responsibility when a new president steps into the White House, and that includes increased scrutiny. While some criticisms of the First Family are warranted — e.g. when they do not responsibly represent America and its values — there are others that are out of line. How much the First Lady smiles, or doesn't, isn't for the public to judge. A meme of Melania Trump looking sad at a Super Bowl watch party spread around the internet Sunday night, and it's time for the jokes about her so-called "sad face" to stop.

So often women are told by men to smile more, as if women are only on this earth to be happy and complacent for them. Women have a right to their feelings, and they also have the right to show — or not show — those feelings while they're living their lives. It's true that most women don't have a national spotlight on themselves or their husbands, but those who do deserve the same respect that all women do: to let their faces rest in peace.

As First Lady for only a short period of time, Melania has already been subject to headlines that describe her as sad and even miserable, all because of a GIF of her face falling at President Trump's inauguration when her husband turned away went viral. Suddenly, there were calls of "Free Melania," apparently meant to not only poke fun at her facial expressions, but also at her relationship with her husband, implying that she is a prisoner.

Whether she looks somber or sad is really none of the public's business. And it worth remembering that she doesn't really seem to want to be the center of attention, either. During her husband's presidential campaign, Melania mostly stayed off of the trail, and as she told ABC News, it was her choice. She cited raising their then-9-year-old son, Barron, as a reason to be home while her husband worked to become president. Now that Donald is president, Melania and Barron are remaining in New York so that Barron can continue to go to his school.

At the Women's March on Washington the day after the inauguration, there were even signs that told Melania to blink twice if she needed help.

We do not get to tell Melania that she doesn't look happy enough for our liking. We do not need her to be smiling all the time. She may be delighted constantly but just doesn't like smiling, for all we know. What we should be focusing on is the actions and words of her husband, who is leading the country.