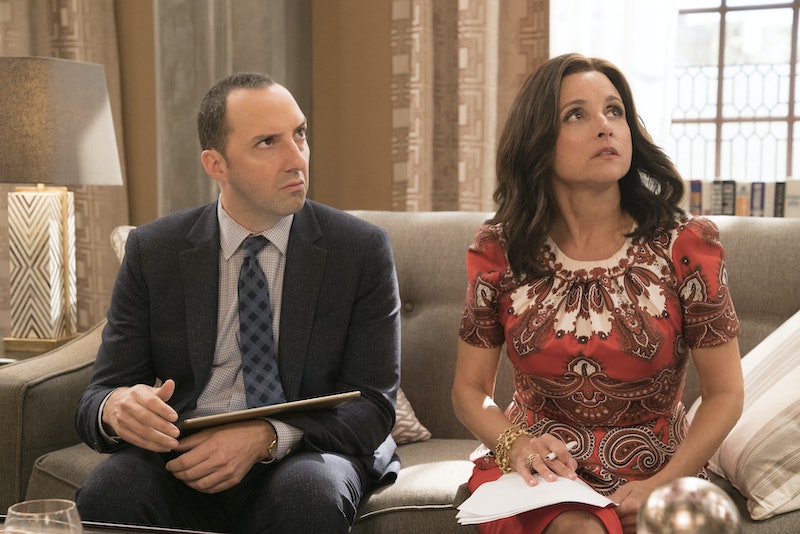 When I think of things that I would file under "tragic-comic," Selina and Gary's relationship on Veep is the first thing that comes to mind. One of the funniest aspects of the HBO series is watching all the main characters hurl hilarious insults at one another so fast that it's nearly impossible to keep up. (It's been noted that Veep contains more jokes per minute than any other comedy.) In a world where there's no kindness or loyalty to be found, Gary stands out because he's so... well, kind and loyal. The terrible manner in which Selina treats him can certainly be funny, but it also perfectly sums up why she's such a terrible person — and why it's so much fun to keep watching her fall flat on her face.

Prior to the Season 4 premiere in April 2015, Julia Louis-Dreyfus summed up her character pretty perfectly during an interview with TheStar.com:

Louis-Dreyfus also described Selina as "possibly the worst presidential candidate ever," but this interview was conducted two months before Donald Trump announced his candidacy. But despite the shockingly low bar set by our current tweeter-in-chief, it's impossible to deny that Selina is, as Louis-Dreyfus observed, a terrible leader, boss, mother, and person.

Furthermore, she's possibly the least self aware character to ever grace our TV screens — so Selina completely takes it for granted that Gary worships the ground she walks on and would quite literally do anything for her.

Selina is a character who consistently feels as though she's been wronged — she shamelessly plays the sexism card when it suits her, but has zero interest in being a feminist role model despite her platform. In last season's episode "C*ntgate," Politico runs an article spilling that one of Selina's staffers called her the c-word. Despite the fact that everyone is swamped because they're, you know, attempting to win an election, Selina tasks Amy with finding the culprit.

Amy tells her boss she's been called that word "many times." In reality, the guilty parties include Amy, Mike, Ben, Kent, and pretty much everyone on her staff except Gary and Richard Splett. But, clueless Gary falls on his sword, admitting that he's the one who said it. (He's unaware that the c-word definitely does not mean "crone.") By the end of the episode, Selina learns that pretty much all her staffers had used the insult except for Gary — but it doesn't appear to change her viewpoint that she's a top-notch president and person, and it doesn't make her feel any closer to the person who holds her in the highest esteem.

To say that Selina doesn't appreciate Gary is possibly the understatement of the century — and it illustrates the depths of her narcissism. Sure, she was rejected by the American people and she's loathed by her staff and the vast majority of Washington insiders — but, in Selina's mind, they're all dead wrong and she's a victim. To Selina, Gary doesn't deserve her kindness, empathy, or respect because he's simply treating her the way she deserves to be treated.

Of course, it wouldn't be much fun to see Selina repeatedly fail and be publicly humiliated if she wasn't such a terrible person. (Her treatment of Catherine would require an entirely separate analysis.) And, let's be honest — one of the best aspects of Veep is the hilariously creative insults the characters fling at each other nonstop. (Most of them are directed at Jonah, but I'm also partial to Amy telling Leon West that "it's always nice to see the most left-swiped face on Tinder." )

But when Gary becomes the subject of the insults, I sometimes feel pangs of guilt for laughing. And, for the first episode in the show's history, I barely laughed at all when Selina treated Gary like dirt and stole his personal story during her recent visit to his hometown. I never thought I'd describe a Veep episode as sad, but that was the first word that came to mind when the closing credits rolled. And that's where things get interesting — tragedy and comedy may seem like strange bedfellows, but they do intersect and that's certainly the case on Veep.

The fact that, on rare occasions, Selina treats Gary like a human being makes the relationship all the more problematic. After both Selina and Gary suffer heart attacks this season, she shows a little humanity when she takes care of him in the basement of her brownstone.

"She wasn’t loving the idea of him being there, but she was attempting something and that speaks to their relationship," showrunner David Mandel told The Hollywood Reporter. "She did more for him than she probably would do for literally any other human being, including her daughter."

And that makes it all the more of a sucker punch when she promptly proceeds to ruin their visit to his hometown by acting like her usual (aka really mean) self. Let's be honest — the relationship borders on abusive and, if their genders were reversed, it would definitely be described as such more often.

Veep is a satire, and the brutal humor is why I love it. But it's interesting that Gary injects a rare glimpse of humanity in a group of characters that are completely ruthless and self-serving. (Richard Splett does not fall into this category, of course — but he's spared from Selina's constant ire.)

Don't get me wrong — Gary is hilarious, and so are the vast majority of his interactions with Selina and her staff, none of whom take him seriously. But plenty of his moments bring elements of tragic-comedy to Veep — and, although they're definitely sad, it makes the show even better and more thought-provoking than it already is.