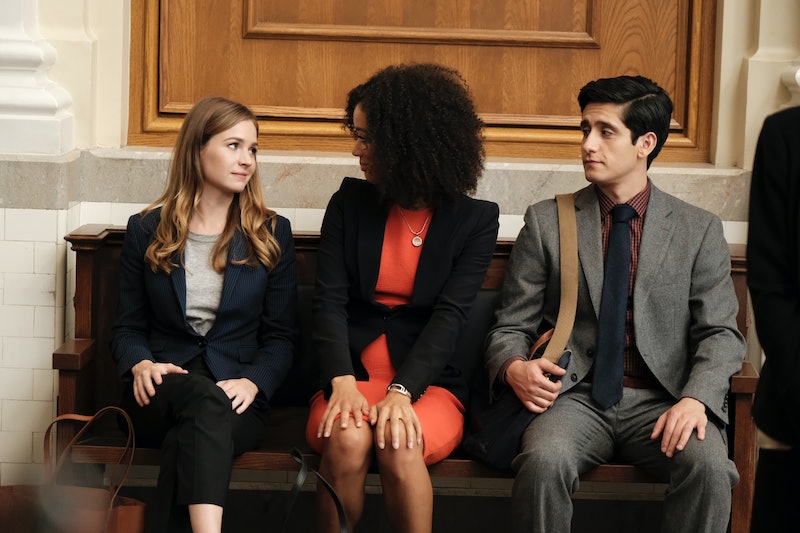 Shonda Rhimes must have to maintain a certain number of television shows to stay alive — you know, keeping swimming like a shark. Obviously, that's the only reason why she can keep on top of so much quality TV programming. The woman is prolific! Shondaland's latest, For The People, takes a page from the Dick Wolf playbook, combining executive producer Rhimes' formula of hot people and sex with the tough breaks of being a first-year prosecutor or district attorney in the Southern District Of New York (SDNY) Federal Courts. According to the pilot, it's the biggest, most important court in all the land, save for the Supreme Court, and these kids should have something to prove. Does the formula sound familiar? Shondaland fans are sure to love For The People.

According to the Hollywood Reporter, Paul Williams Davies, the showrunner, said that For The People will include "romance and sex" but will also tackle big law issues like mandatory sentences, entrapment, the war on drugs, and more. It will be a procedural kind of show, but For The People "[will also take on] personal issues when our characters engage with the law as young attorneys." As reported by Deadline, Davies is well-equipped to run a law show. He himself holds a law degree from Stanford, and he served as a clerk for a federal judge before nearly ten years in litigation. He wanted to be a television writer the whole time, and now, he gets to use his old job for his new job.

This is all well and good, but Shondaland fans just want to know if they can expect the same sexy drama and riveting cases in For The People as with all of the other Shondaland shows. The answer is yes — here's how.

Best pals since the first day of law school (they both sat in the front row in torts, which sounds boring if you ask me), Sandra and Allison are the bestie OGs of For The People. They've supportive of each other's careers and personal lives, and they're both hungry for more. Will they get in the way of each other like Meredith and Cristina did that one time with the 3D printer? That remains to be seen, but since they're both on the same side of the courts, let's just imagine that they'll be a best friend united force forever and ever.

It's As Fast-Paced As Scandal

Motions and dismissals and rulings, oh my! Things in the SDNY courts move really quickly, just as they do in Washington, D.C. One minute, you're winning your case, and the next minute you just got an (allegedly) innocent man sentenced to in federal prison because you wouldn't let your ego cut him a deal. It happens.

There's More Law Than How To Get Away With Murder

How are the Keating 5 (4, RIP Wes) actually passing their classes in law school if they never go to class? They spend more time trying to cover up Annalise's messes and murders than studying. For The People is the show for people who want to understand more about the law, not just watch some law students hide homicides. These people actually went to class and graduated law school without killing anyone, so if you're a law buff that doesn't love How To Get Away With Murder, For The People is for you.

I love a procedural, but Grey's Anatomy hit a cultural nerve because it was bold and daring and because everyone was so pretty and they all kept kissing each other. Scandal and HTGAWM added to that legacy. And, For The People has that same potential.

So, jump on it, Shondaland viewers! For The People is right up your alley.