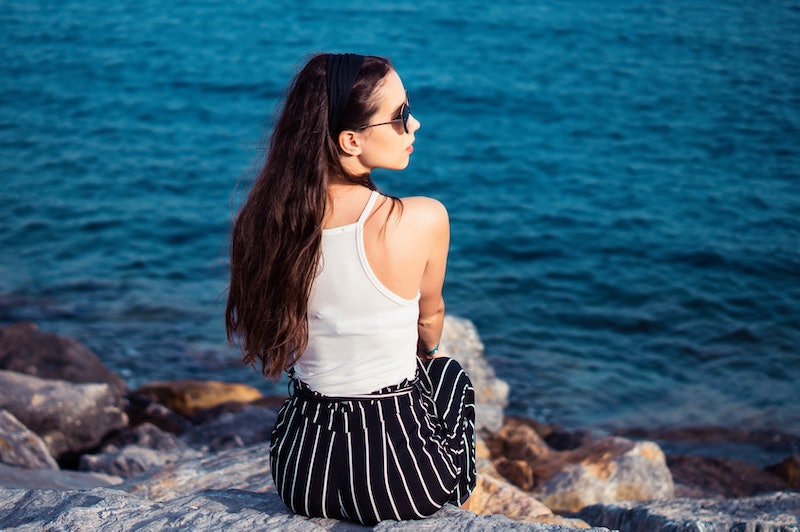 August is often seen as an in-between time: It signifies the end of summer is quickly approaching, but it's not quite the season for cozy sweaters and apple cider yet. It's also the time when many people gear up to leave behind summer vacation (even if you're long past your school days), and get ready to take on extra projects at school or work. The month can feel long, and sometimes anxiety-provoking, and it's not unusual for some people to get extra mopey in August. Commonly referred to as a case of the "August Blues," or "August Sads," fellow Bustler Lucia Peters accurately described this phenomenon as "basically the 'Sunday Scaries' — just for an entire month instead of a day."

So, why does it seem some people are more affected by this seasonal anxiety than others? Amy Sedgwick, LADC, CCDP, SCPG, the director of clinical operations at the treatment center Mountainside, says that oftentimes, much like the Sunday Scaries, August Blues can be a sign you're not being present in your day-to-day life.

"August can bring a mixed bag of feelings. Some people feel regret over not having gone on that perfect getaway or not having 'enough' fun, while others feel a sense of dread or anxiety that they will have to 'buckle down' in September," she explains. "They aren’t living in the moment — either focusing on missed opportunities in the past, or anticipating responsibilities coming in the future."

Moreover, even if you're not currently enrolled in school or stressing at work, your past can play a role in whether or not your mood is greatly affected by August Blues. Ask yourself: Were you a student who stressed about the start of school and homework? Did you always try hard to fit in, or have negative experiences with peers?

As Business Insider reported, research has shown that many of your childhood and teenage experiences can affect your health, mood, and more long into adulthood. So, Sedgwick explains that for some folks, much of the anxiety that's spurred during August may simply be a "leftover feeling from childhood when September marked the beginning of school."

Chances are, if your August Blues are brought on because you are stuck in the past or worrying about the future, the solution is simple: Seize the day. Sedgwick says to "do whatever it is that signifies summer to you, and truly savor the experience" to help some of your August Blues feel, well, less blue. Try to enjoy alone time before summer ends, and perhaps practice mindfulness so you can be more in the moment. Other activities, such as being in nature, grounding your feet, and breathing exercises may also help you feel a little less on edge.

What's more, Sedgwick suggests that, "If you feel anxiety about summer ending, then it may be helpful to reframe autumn. Make a list of the fun things you can do in the fall."

Overall, Sedgewick says, "It’s not always easy to stay in the moment, but anyone feeling August Blues should try to be fully present in their 'right now.'" By tapping into the reasons why you're feeling extra sad or nervous this month, and what makes you more vulnerable to August Blues, you can better care of your mental health.