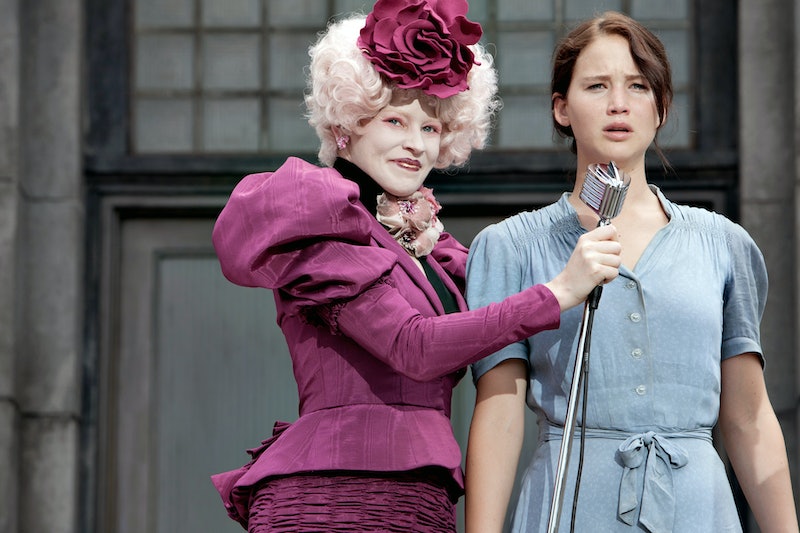 On March 23, 2012, I eagerly stood in line waiting for the midnight screening of The Hunger Games. I couldn't wait to see one of my favorite books on the big screen — especially because Jennifer Lawrence was perfect for the role of the badass heroine Katniss. Although present day life is a far cry from the dystopian nation of Panem, the themes of class oppression, totalitarian rule, and resisting a corrupt government have become increasingly relevant. The Hunger Games still resonates in 2017 because its overarching message is arguably even more relatable on the film's fifth anniversary (the book published in 2008) than it was on its premiere date.

In The Hunger Games, the rich keep getting richer while children in the least privileged districts starve. When she attends her first party at The Capitol, Katniss is horrified and disgusted as she watches its inhabitants gorge themselves on expensive cuisine, only to purge the food so they can indulge in more. Meanwhile, the residents of her district and others are left to forage and hunt for food in the woods, or re-submit their names into the reaping pool just to prevent their families from starving to death.

Although the contrast in The Hunger Games is deliberately stark, the uneven distribution of income in America and across the globe is shocking. According to a January 2017 report from Oxfam, just eight men possess the same wealth as the 3.6 billion people who make up the poorest half of humanity. And, according to a 2014 report, the gap between the rich and the poor has grown at a faster rate in America than any other developed country.

Throughout the 2016 election cycle, I couldn't help but feel as though politics had been turned into reality TV-style entertainment. The first presidential debate between Donald Trump and Hillary Clinton was the most watched debate in American history — but when November 8 rolled around, voter turnout hit a 20-year low. Although many factors contributed to low voter turnout, it seemed as though people were eager to be "entertained" by Trump and Clinton's face-off and less interested in participating in the voting process.

Even in the days when Trump's candidacy seemed like a crass prank that would blow over, it was disconcerting to hear people describe it as "funny" and "entertaining" — even if he'd had no chance of making it to the White House, there's nothing entertaining about watching a man attack a female debate moderator for doing her job, label an entire ethnic group "criminals," and mock a disabled reporter on live TV. To me, it seemed like the lines between politics and entertainment had become disturbingly blurred.

The cornerstone of The Hunger Games is a reality TV series in which people sit back and watch children kill one another in order to save themselves. Obviously that's extremely different than watching a painful election unfold, but I felt unnerved by the laughter and the "what offensive thing will Trump do next?" rhetoric I heard throughout the campaign. It often seemed as though it was playing out as a reality show rather than a pivotal election that would determine the direction of America's future. Even worse, the impact on the marginalized groups who had been relentlessly attacked by Trump didn't receive much attention until it was too late. So, The Hunger Games' theme of using other people's pain as entertainment feels dangerously close to home right now.

The Hunger Games has continued to be a presence in our political sphere because it understands something fundamental to American culture, and something fundamental to why Trump did so terribly, terribly well during his campaign. And that’s the fact that in our culture, a really strong, compelling narrative trumps everything, every time, no matter what side you’re on.

Katniss and Peeta were decidedly the underdogs, but the narrative of their love story was compelling enough to make them victorious. Grady points out that, although many factors contributed to Trump's victory, his background in reality TV taught him how to sell the public a narrative and then give "the audience" what they want. "It’s not nice or flattering for us to believe that our culture can be so easily swayed by something so base as reality television, swayed so much that it can affect the election of the highest executive office in the land. But it manifestly can," Grady wrote.

Another reason The Hunger Games continues to resonate is because Katniss is one of the best fictional role models of our generation. She sacrifices herself to save her sister and, when she's in the arena, Katniss is the one who repeatedly comes to Peeta's rescue — not the other way around. Once she and Peeta are safely out of the arena, Katniss is determined to overthrow the Capitol's regime once and for all — and she knows the best way to do that is by uniting the residents of all Panem's districts. It's only through strength in numbers that they're successfully able to overthrow their oppressive government by the time Katniss' journey comes to an end in Mockingjay.

Although the odds are decidedly not in her favor, Katniss refuses to give up and she never assumes she'll fail simply because she's facing an uphill battle. In 2017, we could all take a lesson from her resilience, strength, and ability to bring people together in order to make a positive change in the world.

More like this
Everything To Know About 'The Hunger Games' Prequel Movie
By Grace Wehniainen and Radhika Menon
Gassed Up Promises All Things Action, Risk, & Redemption
By Frances Stewart
A Political Thriller Inspired By The Munich Massacre Is Coming Soon
By Darshita Goyal
'The Capture' Is Finally Back – & S2 Looks Tense AF
By Sophie McEvoy and El Hunt
Get Even More From Bustle — Sign Up For The Newsletter