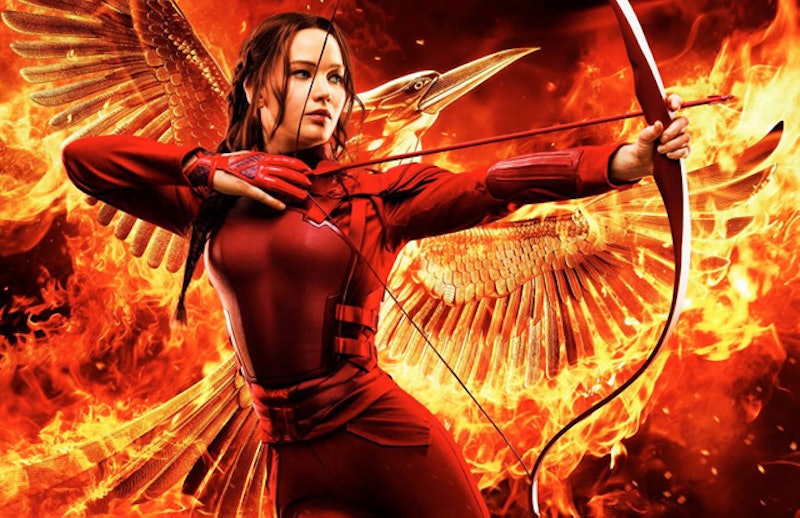 Katniss Everdeen, the girl on fire and leader of The Hunger Games franchise, will go down in history as being one of the most interesting female characters in entertainment. For many fans (particularly women), one of the main reasons she's such an interesting heroine is that Katniss defies typical gender roles, embracing the physical strength of a traditionally male action hero. Much like Ripley of Alien (before she turns all maternal crusader in the sequel), The Hunger Game s sees Katniss takes command, saves lives, and kicks ass, and just so happens to be a woman. It's an incredibly inspiring character, and there's a reason she's so beloved by female fans and Jennifer Lawrence alike.

What makes Katniss particularly interesting is that despite her displays of stereotypically "masculine" traits, she never abandons what could be considered her “feminine” characteristics, and this duality is not necessarily a bad thing. As New York Times critic Manohla Dargis wrote after the release of the first film, “Katniss isn’t locked into gender. She has assumed her dead father’s responsibility as the family provider and is also a mother surrogate for her sister, Prim. But Katniss doesn’t shift between masculinity and femininity; she inhabits both... Is killing masculine? Is nurturing feminine? Katniss nurtures and she kills, and she does both extremely well.”

The Hunger Games premiered in 2012, and in the time since, audiences have begun to move beyond the desire for and reverence of the “strong female character” (SFC) in our entertainment. For awhile, we ached for women whose physical capabilities and intellectual prowess were equal to that of male heroes, but are now embracing the idea that not all well conceived and non-stereotypical female characters need be “strong” in a physical or emotional sense; while that may be fitting at times, women can also be as flawed, conflicted, and damaged as men. Praising them for being "strong," as Carey Mulligan pointed out recently, implies that women are inherently weak; it's time we embraced a more complicated view of gender roles in film. That said, Katniss will always be hailed as one of those characters early on in the SFC trend who fit the bill and met the public's expectations for the label thoroughly.

It seems, though, that in order to make Katniss’ gender duality work, there had to be a counter character to fill the traditional "victim" void. Enter Peeta. Throughout The Hunger Games , Peeta has always been the one needing rescue. No one thought he stood a chance at winning the games when he was reaped, and he knew it, too. After being rescued constantly in the first two movies, audiences began to spot a trend; NPR's Linda Holmes even labeled him Katniss' “Movie Girlfriend," writing, “Peeta is Pepper Potts and Gwen Stacy, helping and helping and helping until the very end, when it's time for the stakes, and the stakes are: NEEDS RESCUE."

This swapping of the usual gender dynamic for its lead characters has always been one of the most interesting aspects of The Hunger Games. Peeta has constantly needed help, and Katniss has always come to his rescue. Sure, he saved her once, by throwing her a piece of burnt bread when she was starving, but even providing food falls into that "nurturing" category.

And then there was Gale, Katniss' ever-so-masculine friend and possible love interest. Wrote Holmes, “You could argue that Katniss' conflict between Peeta and Gale is effectively a choice between a traditional Movie Girlfriend and a traditional Movie Boyfriend... Gale is jealous and brooding about his standing with her; Peeta is just sad and contemplative. Gale works in the mines, not in a bakery. He's a hunter, [not a painter]. He grabs her and kisses her because he simply must. He's taller.” It’s a bit disappointing that the story needs to seemingly balance out its male characters to this kind of extremity, but where would a YA story be without a love triangle featuring two polar opposite competitors?

One fear I had going into this weekend's Mockingjay, Part 2 was that the careful dynamic the filmmakers had spent three movies crafting would be botched. I worried that the hero role Katniss has embraced this entire series would be circumvented to allow Peeta his “moment." You know what I mean; any science fiction fan has seen this happen. A physically strong, powerful, and intelligent female character is introduced, only to have her downgraded to a bumbling idiot by the series' end. It happened in the Star Wars prequels; Natalie Portman’s Queen Amidala was a cunning politician in the first two films, but became a helpless, walking uterus by Revenge of the Sith. In The Matrix trilogy, meanwhile, it’s hinted that perhaps Trinity would end up being “The One,” but like so many women before her, she ends up existing only to bring the male hero to his destiny.

These are just two of the many examples I could name; in female-led franchises like The Hunger Games, it happens more often than not that a woman's entire purpose ends up being to support a guy on his super important journey, despite all the character development she's previously undergone.

So I was thrilled to discover that thankfully, Mockingjay, Part 2, doesn’t muck it up. All throughout the movie, Peeta still needs saving, both physically and emotionally — perhaps more than he ever has before. Not only does Katniss put herself in harm’s way time and again to ensure his survival, but as a result of his brainwashing, it becomes Katniss’ responsibility to bring Peeta back mentally. She expends her energy protecting both his body and his mind, because having Peeta back physically means nothing if he’s not there emotionally, too. It should come as no surprise then, to those who haven't read the novels, who Katniss chooses in the end. Choosing Gale was always going to mean submitting to a gender role she was never comfortable with., but by ending up with Peeta, Katniss is able to stay both the mother and father, the protector and the provider. And from the beginning, that all she ever knew how to do.