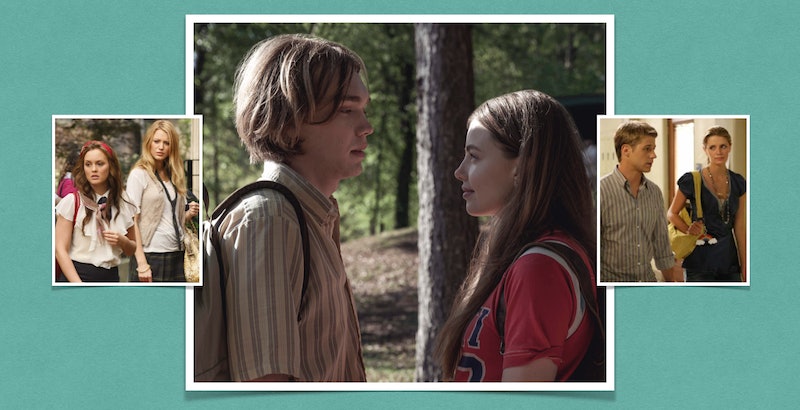 “You don’t sound like you are in high school,” a scraggly-haired liquor store cashier says to Alaska Young (Kristine Froseth) in the first episode of the new Hulu series Looking for Alaska. “That, Gus, is the whole point,” she retorts before triumphantly walking off with a full crate of Strawberry Hill rosé despite being underage. Miles (Charlie Plummer) catches sight of her from the window of his car and can't help but turn around to gawk at her cool confidence. Alaska, like many heroines of the teen genre before her, is singular. She quotes Simon Bolivar, smokes cigarettes, and speaks her mind in a way that is entirely un-high school like.

In the time since John Green released his debut novel in 2005, his work (which also includes novels like Paper Towns and The Fault in Our Stars, both of which were adapted as films) has come to define a particularly whimsical strain of the coming of age story. His characters are often flawed, extraordinary human beings whose stories get at the heart of what it feels like to be a teenager in a tumultuous world. Almost two decades later, Alaska's story still resonates with readers — one of whom has worked tirelessly for 15 years to bring it to the screen.

“We both have extremely strong memories of being a teenager, as I think a lot of people do,” Looking for Alaska co-creator Stephanie Savage tells Bustle. It was Savage's writing and producing partner Josh Schwartz who optioned the rights to Green's book before it was even published. The two are experts in the genre, having created teen classics like Gossip Girl and The O.C., and they're hoping that Looking for Alaska similarly resonates with audiences young and old. “As writers we love writing about firsts: first love, first loss. Those are really the impactful moments that make you who you are as you grow up and become an adult.”

The series, out Oct. 18, is the newest addition to a TV landscape experiencing a teen show renaissance. From Riverdale to Chilling Adventures of Sabrina to continuations of cult classics like Veronica Mars and HBO Max's upcoming reboot of Gossip Girl, high school has come back in a big way. Many '90s and early 2000s teen television shows have gained cult followings long after their last air date, but now, the new teen shows are also evolving with the times. With more diverse casts, more queer characters, and a dedication to taking young people's stories seriously, the new landscape of teen TV is pushing boundaries. Look no further than shows like HBO's Euphoria, which offers a deep dive into mental health and substance abuse, or Stranger Things, which focuses on the trials and tribulations of friendship in the face of horrifying monsters and high school bullies.

Whether set in penthouses on the Upper East Side or in a run-down high school in the Midwest, there is a very good chance that audiences can find some part of the adolescent panic to relate to, be it the awkwardness of asking out a crush or the giddiness of breaking a rule for the first time. "Whether you are writing it for an audience of people who are teenagers, who used to be teenagers, or who want to be teenagers, everyone can relate to those iconic moments [of growing up]," Schwartz says.

Growing up can be messy and melodramatic, and Schwartz and Savage have set out to make shows that help us to remember what these years felt like. It's easy to become jaded and distanced from this period of our lives, but Schwartz and Savage's work implores audiences to remain tapped into the raw and unglamorous realities of trying to find one's way in the world.

"When you are that person going through that first, it is not silly, it is life and death, it is the highest stakes in the world," Schwartz says. "You are going to experience that first kiss, that first heartbreak, that first friendship. Those are epic times that everyone remembers in their own lives."

In many ways, teen television sits at the intersection of escapism and realism. The clothes may be gorgeous, and everyone has inexplicably clear skin and somehow possesses the ability to solve a grisly town murder, but the struggles and insecurities are universal. From getting your heart broken to experiencing loss for the first time, teen television bares all unapologetically and unironically.

So what's the secret to making a teen show that continues to be relevant decades after its release? "There are really a lot of things you can throw at the audience, but if you are really trying to hold people's interest and get them emotionally involved, that is all about [creating] those characters," says Schwartz. "You have to write it from the point of view of the character, as if what is happening to them is the most important thing that has ever happened to them," adds Savage. As a creative team, they focus on writing multidimensional characters that challenge stereotypes and take risks.

With the best teen characters, there's always more than meets the eye. Gossip Girl's Blair Waldorf may have been obsessed with headbands and gotten swept up in a few whirlwind romances, but she was also an ambitious career woman who was fiercely loyal to those she loves. Riverdale's Betty Cooper comes off as the typical girl next door, but she's smart and consistently her own hero, getting out of terrifying situations without a knight in shining armor to help her. In Looking for Alaska, Miles (who goes by the nickname Pudge) must grapple with the fact that he may have used Alaska with little regard for her as a person. Without meaning to, he idealizes her to the point of dehumanization, and is forced to dismantle his own reductive view of her as a Manic Pixie Dreamgirl within the story itself.

The proliferation of streaming services in the era of Peak TV means there's more room than ever to tell all kinds of stories, and that's only buoyed Schwartz and Savage's success in the genre (their superhero take on growing up, Marvel's Runaways, is heading into its third season on Hulu).

“When we made The O.C., really the only place you could watch a show with teen characters was on The WB," Savage says. "Maybe there was one show on FOX. There was just no outlet that was willing to program those kinds of shows." Streaming has changed that. “People are not just only willing to tolerate making these shows, they actually want them.”

It is likely in no small part because the audiences often skew female that these shows were written off as unserious in the same way romantic comedies and “chick lit” often is. A great deal of them were canceled (there are only 15 episodes of Freaks and Geeks), given scathing reviews (as The O.C. was when it first aired) and dismissed as “guilty pleasures” rather than real pieces of influential culture. But the genre has historically always pushed boundaries, made daring decisions, and offered incisive cultural commentary. Where popular procedurals or medical dramas often can’t dive into controversial stories, shows like My So-Called Life, Degrassi, Skins, and Glee did so fearlessly.

Unrequited love, feuds with friends, pressure from parental figures — all of these issues come up time and time again in our lives. The power of a great YA novel or a quality teen TV show is not just the lessons it teaches, but the way it makes audiences feel. There are few other tales that cause people to squirm and smile and gasp like that of a coming of age story. It's why John Hughes movies remain relevant, why there are still people debating Jess vs. Dean, and why so many people turn back to these teen shows when they are feeling nostalgic.

Looking for Alaska is a heartfelt look at grief and the complicated nature of loss brought to life by a cast of vibrant characters. It's a love letter to friendship and the magic of getting to know someone that implores audiences to treat each other a little more kindly. If teen television is any indication, everyone is carrying around a burden and looking for those special people who make it feel a little lighter.