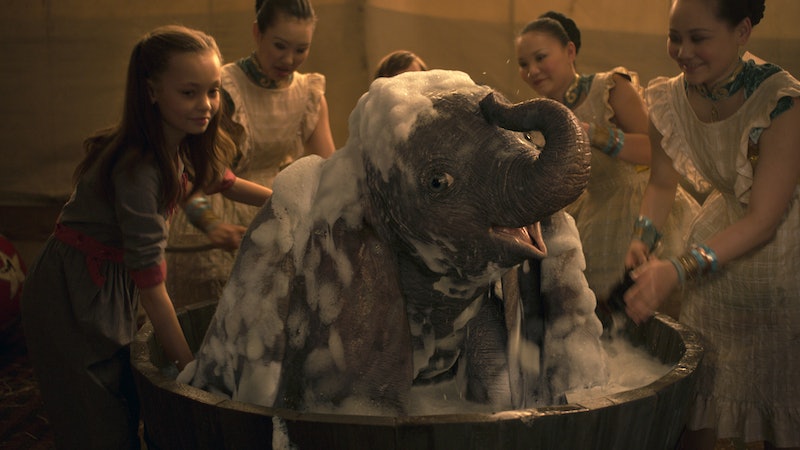 "I don't know if it's a comedy or a drama," Dumbo director Tim Burton says to a group of visiting reporters at Pinewood Studios near London, dancing a little on the spot. "I'll let you know when I'm done with it." He's just dropping by to greet us before zooming away on a golf cart back to the set of Dumbo, Tim Burton's whimsical take on the Disney classic. His jokes about the film's tone highlight that the remake, out Mar. 29, is a bit of a departure for the auteur, and it may surprise even the most devoted Burton fans with just how warm it is.

The stereotypical Burton look, favored by teens at Hot Topics everywhere, involves the pinstripes of Sweeney Todd, the spiral cliff of The Nightmare Before Christmas, and the exaggerated facial features of Batman Returns and Alice in Wonderland. It's what audiences are trained to look for in a Burton aesthetic, but Dumbo is decidedly more kid-friendly and sweet.

"There’s not the expected goth element in the film," says Academy Award winning costume designer Colleen Atwood, walking us through her various designs in a room filled with costumes, concept art, and props from the film. Front and center is giant poster of the baby elephant that reads "Believe!" It's uplifting, no pun intended.

"It’s really nice to see the lightness of Tim that’s always present in his films, but since he’s so known for the dark, he gets tagged with that," she continues. Atwood has worked with Burton on Sweeney Todd, Alice in Wonderland, and more. "I changed it up a bit," she jokes about the Dumbo costume design. "I don’t think I have a black and white stripe anywhere."

"He’d probably be the first to say he’s judged wrong [when people claim that] everything’s dark," says producer Derek Frey, who started as Burton's assistant in the '90s and currently runs his production company. Though the sadness and heartbreak of the original Dumbo is still present, "I wouldn’t say we’re bedded in darkness, or murkiness, or fogginess," says Frey. "[Burton's] actually surprised me in the trajectory he’s taken; that it is quite bright and inviting."

If you were to compare Dumbo to any other Burton film, Frey suggests that it's most like 2003's Big Fish — which features a memorable scene in a field of bright yellow daisies. This film's production title, incidentally, is "Big Ears," a cheeky reference to both the elephant and Burton's 2014 Big Eyes, as well as Big Fish, which also stars Danny DeVito as a ringmaster. "I think a lot of people, they just assume it’s gonna be like Batman’s version of Dumbo," jokes Frey, "and it’s not."

Walking around set, it's also notable that there's not a lot of green screen — another trademark that has been "tagged" on Burton in this particular era of his career, so to speak, particularly after Alice in Wonderland. In creating the the titular character, Dumbo, of course, does utilize a lot of visual effects. When we visit a training tent where the circus performers practice, production is filming second unit footage of the empty set, where the visual effects team will add Dumbo later. The tent itself, however, is very real — with hay and fog, it feels truly magical. You can see a little of it in the sneak peak below:

When we finally get to see Burton in action, he's clearly in his element. There's no stress in the vividly colored studio, save for a few stray balloons that have floated to the ceiling. While Burton instructs crew to "put on a costume or get out" when cameras are rolling, our group is hidden behind them, casually sipping tea as the cast and crew film what appears to be one of Dumbo's final scenes. In the scene, DeVito's character Max Medici welcomes a group of patrons to his new circus, handing them off to Milly Farrier, the young girl played by Nico Parker, whose father is Colin Farrell's character Holt.

Burton flits around in a cozy cardigan, dipping in and out of a tent full of video monitors. "On to the next challenge," he says when they're done, high-fiving frequent collaborator DeVito, who responds with an "Oh, boy!"

It's a far cry from the grim and dark Burton that fueled our emo phases. Maybe all it took was a cute, baby elephant to reveal this lighter side of the director. Advance tickets are on sale now.