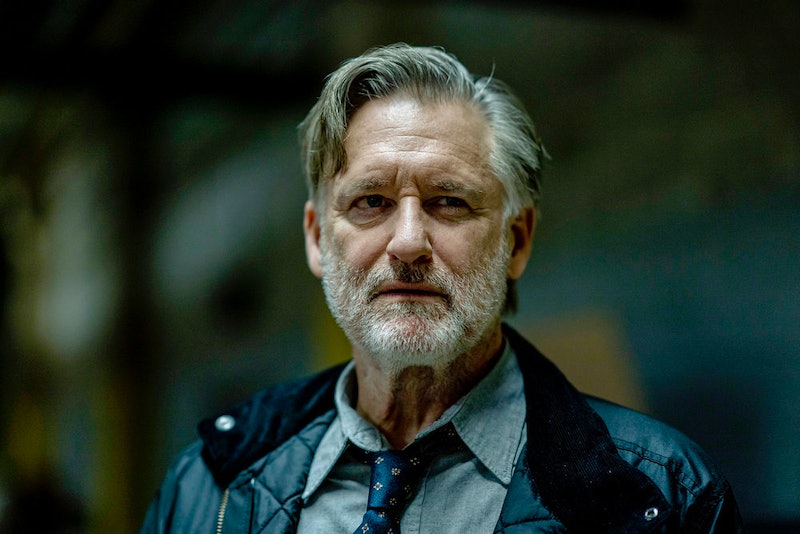 Ambrose shared a strange connection with Matt Bomer's Jamie throughout the season, even after Jamie confessed to killing two people. "[Ambrose] had sustained patience for so long because he was waiting for evidence that he thought would be rock solid and it just seemed to elude him over and over and over again," Pullman says. But once Jamie actively targeted Ambrose, he decided to end their game of cat and mouse by shooting Jamie during a standoff in his home.

Although Jamie had continued to needle Ambrose leading up to his death, he had posed no fatal threat to Ambrose when the detective finally pulled the trigger. "It wasn't really very meditated and it was more reactive than he's probably comfortable [with]," Pullman says of his character's decision to kill Jamie. "It's kind of shocking to him, to Ambrose. And definitely something that is going to have consequences."

Beyond the complicated matter of an officer of the law shooting an unarmed person, Pullman notes that Ambrose personally identified with aspects of Jamie. Jamie seemed a loving husband and a teacher in good standing with the community, but underneath, he was tortured and deadly. Ambrose recognized Jamie's dark side — or "shadow side," as Pullman refers to it and Pullman sees Ambrose killing Jamie as "killing his own shadow self." Showrunner Derek Simonds agrees, saying, "Ambrose needed a mirror to finally face himself."

Jamie's reaction to his own death also shakes Ambrose's confidence. Even though Jamie had so fervently believed he could fearlessly face death due to his games of jumping off bridges and burying himself alive with his college pal Nick (Chris Messina), Ambrose saw firsthand that wasn't the case. "[Ambrose] was so torn by Jamie's sense of fear as he faced his own death," Pullman says. "I think that's going to definitely shatter Ambrose's ability to feel like he can always be sure of himself and what his beliefs are."

The final scene of the season does show Ambrose acknowledging his grief in front of his new girlfriend Sonya (Jessica Hecht). Simonds notes that simply allowing himself to be so open with Soyna is major emotional progress for Ambrose. "I see it as a sad but very hopeful scene," Simonds says. "The vulnerability that he hides so assiduously is now in full view, making way for the possibility of an authentic connection with Sonya." But for his part, Pullman isn't so confident that Ambrose is a changed man who has found lasting love with Sonya. While he recognizes that it's good that Ambrose allows Sonya to see him for who he truly is, Pullmans says it's "no guarantee that he's really ready for the next level" of a relationship.

The Sinner may not get the chance to follow up on Ambrose's personal life though since the series hasn't been renewed by USA yet. But Simonds says he has ideas for where Ambrose's story could go from here. "I'd like to see him grapple deeply with what happened with Jamie and face head-on the big spiritual questions — what is the meaning of my life? How do I fulfill its purpose? — that Jamie was struggling with," Simonds says, noting that he wants the show to "evolve rather than repeat any existing pattern."

Pullman is also interested in continuing with Simonds' vision for Ambrose in any potential future seasons. "It's been an incredibly rich experience for me," Pullman says. "It definitely feels like you're not doing a comic strip sequel. You're dealing with really applying a lot of subtle psychological truths and so, it keeps me awake."

Still, Ambrose displaying his own pain and opening up is a fitting end to the three seasons of The Sinner, where the detective had dedicated himself to investigating the trauma of others. "We've never seen Ambrose like that before," Simonds says of that final scene. "If the show ends there, I'll be very very satisfied."

More like this
The Plane Crash In 'Dear Edward' Is Based On A 2010 Tragedy
By Grace Wehniainen
This 'One Tree Hill' Wardrobe Error Is Going Viral On TikTok
By Brad Witter
Keyla Monterroso Mejia Is Finally The Star Of The Show
By Gabrielle Bondi
'That '90s Show' Is Officially Coming Back For Season 2
By Gretchen Smail and Grace Wehniainen
Get Even More From Bustle — Sign Up For The Newsletter
From hair trends to relationship advice, our daily newsletter has everything you need to sound like a person who’s on TikTok, even if you aren’t.