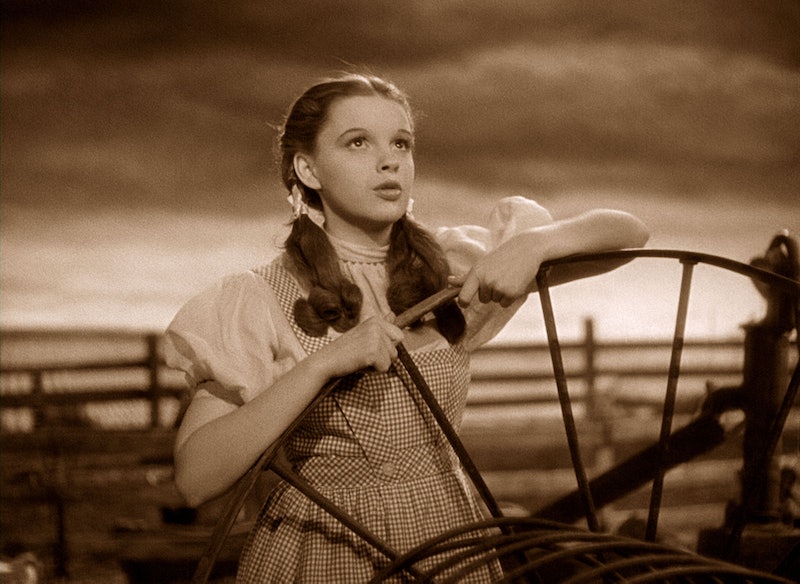 Ever since I was a child, my favorite movie has been The Wizard of Oz. The 1939 musical classic starring Judy Garland, which tells the story of a young Kansas girl named Dorothy and her dreams of going over the rainbow, was played in my house off of an old VHS tape recording at least once a day when I was a kid. I have seen it just about a zillion times, but until this weekend, I had never seen in on the big screen. Fathom Events has brought the film back to theaters across the country for its 80th anniversary, and you can still nab tickets for upcoming shows on Jan. 29 and 30 and Feb. 3 and 5. But sitting in that dark theater, with my giant popcorn, and bubbly soda, watching a movie I had seen so many times before, I was startled by how much the story reflected today's millennial experience and the burnout that's accompanied so many of our lives.

Earlier this month, millennials across the country read, shared, and identified with writer Anne Helen Petersen's lengthy Buzzfeed article on millennial burnout. Through expert analysis and research, Petersen attempted to explain why the millennial generation, adults somewhere between the ages of 22 and 38, are often teetering on the edge of burnout, why we work all the time, yet achieve so little, and yet, despite that fact, we're considered lazy and admonished for ruining the countries industries. (Petersen's article did receive some pushback for not including enough diverse voices and therefore neglecting to explore what factors such as race have to do with burnout, after which she issued a follow-up piece featuring stories from millennials of many different identities and socioeconomic classes.)

Much like Dorothy on her farm in Kansas, millennials have grown up longing for more. As Petersen details, as children we were taught that we could achieve anything as long as we worked hard enough, wanted it hard enough, or just kept fighting for it. Watching the film, as Garland began the first few lines of "Somewhere Over the Rainbow," I burst into tears in the very-adult understanding that dreams don't always come true, and that "making it" doesn't always lead to happiness. For Dorothy, somewhere over the rainbow was a way out of her tedious, provincial life. For millennials, it was the idea that all of our hard work would someday pay off. That we would make enough to be able to pay off our loans while also saving for a house and have a stable income enough to plan the family life that we wanted, or that we wouldn't need to take on multiple jobs just to make ends meet. Instead, we're struggling, and we're not meeting a lot of the milestones defined by adulthood, a stable career, house, marriage if we want it, kids if we want them, because we're too burnt out.

In the era of teenage billionaires and the constant bombardment of 30 Under 30 success stories, millennials have big dreams and were taught to have huge goals. What did we find, then, when we finally made it over the rainbow? "So what happens when millennials start the actual search for that holy grail career — and start 'adulting' — but it doesn’t feel at all like the dream that had been promised?" Petersen writes, describing the "psychological toll of realizing that something you'd been told, and came to believe yourself, would be 'worth it' — worth the loans, worth the labor, worth all that self-optimization — isn’t." Millennials are earning 20 percent less than their parents did, per The Motley Fool, and saving less. Additionally, 60 percent expect Social Security to be non-existent once they reach the age to qualify for it, and 48 percent expect to be working at least part time in what should be their retirement years.

Much like millennials aging into adulthood and entering the workforce have found, Oz isn't exactly what Dorothy expected. It's not that she's finding it too hard to handle, but rather that the effort put forth doesn't equal the return on investment. Watching Dorothy's quest felt like a manifestation of the"self-optimization" that Petersen describes; the never-ending list of self-improvement tasks millennials are expected to maintain, from professional achievement, to optimum health, to balanced home lives.

After arriving in Oz, Dorothy is hailed as a savior, which just has "millennial special snowflake" written all over it. But after nabbing the amazing shoes (you must always look great), Dorothy has to fight a witch who has it in for her for no good reason (professional competition), get from point A to point B on an unmarked, winding road (plan your life through hurdles and setbacks), pick up three children along the way who need emotional and physical support (no metaphor there), gets attacked by nature (illness and aging) and can't even get what she wants without killing the Wicked Witch (performing an impossible task that her boss can't handle himself.)

After Dorothy, Scarecrow, the Lion, and Tin Man kill the wicked witch and bring her broomstick back to the Wizard, just as he asked, he tells them to come back tomorrow so he can think about their requests a little bit more. It's at that point, Dorothy loses it, and who wouldn't? Her outburst is every millennial on the edge of burnout, cursing the universe for not keeping up its end of the bargain.

"If you were really great and powerful, you'd keep your promises!" she yells at him. She did everything the Wizard asked, she did exactly what Glinda told her to do, she did everything right, and the Wizard still isn't giving her what she deserves. He even attempts to gaslight her, saying, "Pay no attention to that man behind the curtain." It's enough to make her, and us, say 'To hell with Oz, I'm going home.'

And home is all Dorothy ever wanted anyway. But millennials grew up being encouraged to think grander, achieve more, and be the best, which is why so many of us are having a hard time accepting that it's OK to want simplicity. We were taught to strive for being CEO of a company, but what if all we want is a job where we're respected, that earns us enough to enjoy things like a home, family, or occasional travel? Growing up being taught to aim for over the rainbow we feel like failures if we land just below it but still bask in its glorious colors. Dorothy went over the rainbow only to discover there's no place like home, and millennials are learning that the overachieving status symbols like the corner offices, industry awards, and huge paychecks we've been taught to fight for might not be worth the effort in the end.

Naturally, this doesn't mean that we should abandon all goals or resign ourselves to mediocrity, nor does it negate the fact that today's capitalist economy has killed the steady jobs of the past, has saddled America's millennials with student debt, and makes it unbearably hard to make ends meet. It's going to take a lot of societal changes to undo the mindset millennials have grown up with, but perhaps the next generation, Generation Z, will have a better understanding of how expectations and reality don't always line up. But there's happiness to be found in the acceptance of smaller dreams, the understanding that some of us can stay in Kansas and be just fine. Or we may visit Oz and realize its not for us. Or we have different goals altogether than the ones we've been fed. You can make it over the rainbow and say, 'No thanks.'

Dorothy sang of a place where troubles melt like lemon drops and the clouds were far behind her, but found that place to be her own backyard. Though I had seen The Wizard of Oz hundreds if not thousands of times before, this viewing, on the big screen no less, was the first time that I connected Dorothy's journey with the modern world. At 80 years old, The Wizard of Oz and its connection to millennial burnout feels like it could have come out today. Sometimes, happy little bluebirds fly beyond the rainbow only to turn around and come back.