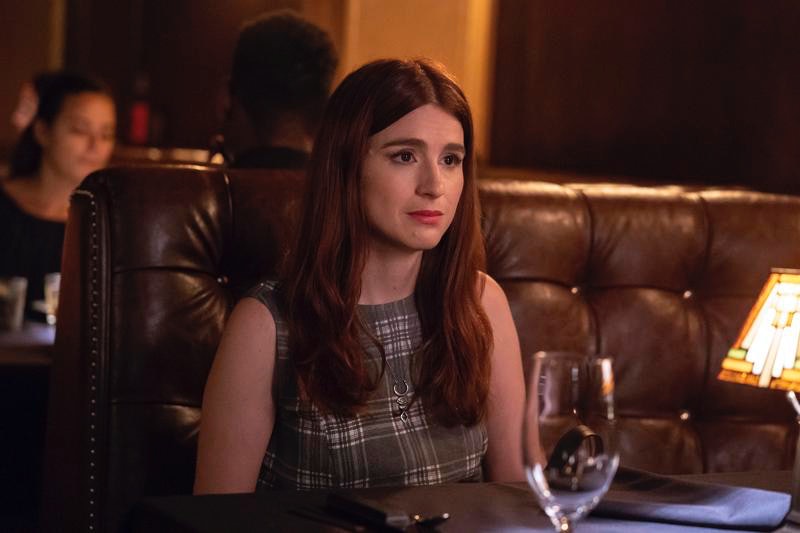 Throughout its five season run, You're The Worst has been widely praised for its depiction of clinical depression. It's something Aya Cash's Gretchen has actively coped with since Season 2, and that continues up until the show's final moments. Ahead of the series finale, creator and showrunner Stephen Falk explains the Season 2 moment that changed Gretchen's relationship with her depression to Bustle TV writer Jack O'Keeffe.

My hope with You're The Worst is that people are always aware that not only do I think Jimmy and Gretchen's bad behavior is not OK and certainly not cool at all, but that I think that their fears are basically equal to Peter Pan not wanting to grow up. There's nothing more complex or interesting about it. They're stuck in an arrested development, but it's a tension that we all feel. It's the possibility of, as LCD Soundsystem says, "losing your edge." It's a ridiculous pursuit. It really is.

The Season 2 episode "LCD Soundsystem" sort of breaks apart that fantasy for Gretchen. We follow her on a day when she's in the throes of her depression and trying all of her coping mechanisms that had worked for her whole life, which leads her to do something she's never done before and stalk a random couple, Rob (Justin Kirk) and Lexi (Tara Summers), who are maybe 10 years older than her and Jimmy.

The season is really about the destructive power of depression on not only the individual but the relationship. In this scene, she takes her depression back as a secret.

I think there's this sort of comedic tension that we're always playing with where Jimmy and Gretchen are very concerned — in a deep and emotionally felt way, though it's really kind of shallow — with being cool and not becoming one of the "Sweater People." Gretchen sees Rob and Lexi as a couple who are domestic, but still cool. They represent almost an idealistic happiness. Rob is a film restorer and Lexi is a green space architect. They have a little kid named Harper and a pug and they live in Los Feliz. They lament their Largo days, which was a cool club in L.A., but they also talk about getting their kid into nursery and the right preschool.

Early in Season 2, we started showing Gretchen sneaking out late at night and crying in her car. Then, in "There Is Not Currently a Problem," we named what was happening — that she had clinical depression. After that, we had this Sunday Funday Halloween episode where Jimmy is trying to "cure" her. So there's the discovery of it, them trying to dance around it, and then "LCD Soundsystem" is where Gretchen's depression takes a dark turn. She almost kidnaps Rob and Lexi's kid from their nanny, kidnaps their dog, and then shows up at their house to return the dog. Then we get to this scene where things are good. She has gotten what she needs out of this couple. She sees a possibility of a future that is happy — maybe with Jimmy. She tells Rob, "You guys are great. This is great," and we see Rob take a big turn and go on this monologue where it's not great:

"I don't know. Sometimes I just look around and wonder, like, how did this happen? I mean Lexi just got this Mini, it's a really good car, gas mileage is great, but I see it in the driveway and it's like 'Ugh, what?' I mean one minute I'm living in this cute little studio near Beachwood, interning at New Line, swing dancing at the Derby, just me and my dog and pizza and condoms — remember those? Suddenly, I have a child and a mortgage and it's like, what? Hey, if you ever wanna go to Cha Cha's and get a drink I would be totally down. I don't even know anymore."

We see in the scene where he and Lexi are walking back from the coffee shop, he's the one driving a conversation about Harper's school. But the minute Lexi isn't in the room, he's like, "Lexi keeps talking about Harper's school and I don't want to have that conversation," even though we just saw that he did want to have that conversation. So he's either lying to Gretchen and is just trying to feel cool and hit on her or he's lying to himself and to Lexi. It's really sleazy and duplicitous on a couple of levels.

He basically soft hits on her. In the writers room, we call it "whisper-dadding," which is now a term that we all use for these guys who get around younger girls and say, "Oh man, you know, my wife — I love her but..." It bespeaks a deep character flaw to pretend everything's fine and then start bemoaning your life the minute your wife isn't in the room. Seeing Rob do that breaks Gretchen down, and she ends the episode lower than she started, just sobbing as Jimmy prattles on about how dumb Rob and Lexi's treehouse is.

Season 2 is really about the destructive power of depression on not only the individual, but their relationships. After this scene, Gretchen takes her depression back as a secret. She goes out to try to "fix" it for the good of she and Jimmy's relationship, and it doesn't work. Thematically, it is a low point in her journey and she gets worse throughout the season. It almost drives them apart until Jimmy does the one thing that she needs — just builds a pillow fort around her and stays. That simple gesture of staying is what allows her to then find the courage to do something she's never done, and that's go to therapy and get medicated.

We didn't want to play into the sin that I think some shows might do where we just bring something up and then let it go. Even if you do go into therapy and take medicine and work on yourself and find stability, it's always there. It's always sort of a specter that jumps out at any time. And that's why we carry the arc of Gretchen's depression to literally the last scene of the series. That's what feels holistically real and right, because it's not something that just ends.

You're The Worst's series finale airs Wednesday, April 3 at 10 p.m. ET on FXX.