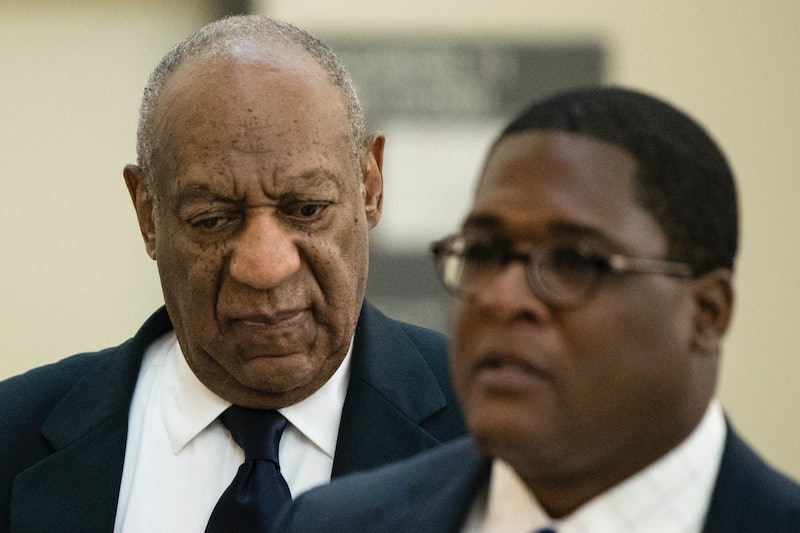 On Saturday, June 17, the sexual assault trial of Bill Cosby ended in a mistrial, as a Philadelphia, Pennsylvania jury remained deadlocked after days of deliberation. In other words, the prosecution failed to convince 12 people, beyond a reasonable doubt, that Cosby sexually assaulted Andrea Constand in 2004. But there's still hope after the Cosby mistrial, both for Constand's case and for his dozens and dozens of accusers.

Because a mistrial and an acquittal are, perhaps needless to say, are very different things. Despite the victorious tone on the part of Cosby's defense ― his lawyer Andrew Wyatt told assembled press that his client's "power" and "legacy" had been restored ― the 79-year-old comedian is going to end up in a courtroom again, barring unforeseeable circumstances.

The prosecution made it clear immediately following the mistrial that they have no plans of abandoning the case, and will have Cosby retried. Obviously, there's no way to predict what will happen when a new jury considers the case, and whether they'll be able to arrive at a conclusive verdict. The jury that deadlocked on Saturday had deliberated for more than 50 hours before finally concluding a consensus couldn't be reached.

The criminal retrial isn't the only legal situation in Cosby's future, either. He's also facing multiple civil lawsuits from 10 of his sexual assault accusers, raising the specter of non-criminal financial penalties. All in all, 60 women have publicly accused Cosby of sexual assault and rape ― accusations he has completely denied. Basically, Saturday's mistrial notwithstanding, Cosby's freedom and fortune are both still at risk to the justice system.

As U.S. News & World Report notes, some of the civil suits aren't even being brought over the alleged sexual offenses themselves, but for defamation. One of the reasons Constand's case is the only criminal one is the age of so many of the allegations. With stories spanning decades, criminal prosecution is often impossible due to different states' statutes of limitations.

In other words, while the mistrial was effectively a minor victory for the Cosby defense ― it established it can convince at least one of 12 people of Cosby's innocence, if nothing else ― the legal proceedings are far from over, both because of and beyond the criminal case.

As for the criminal retrial, no start date has yet been announced, but Judge Steve O'Neill will reportedly seek to schedule one within the next 120 days, meaning it shouldn't be too much longer until the timeline becomes clear.

More like this
The Music Industry Continues To Fail Black Women
By Precious Adesina
Celebrities & President Biden Are Enraged By The Leaked Roe v. Wade Decision
By Alyssa Lapid
How To Fight For Reproductive Rights, Based On How Much Time You Have
By Courtney Young
LGBT+ Men Fleeing Afghanistan Were Denied Asylum By The Home Office, New Findings Show
By Sam Ramsden
Get Even More From Bustle — Sign Up For The Newsletter