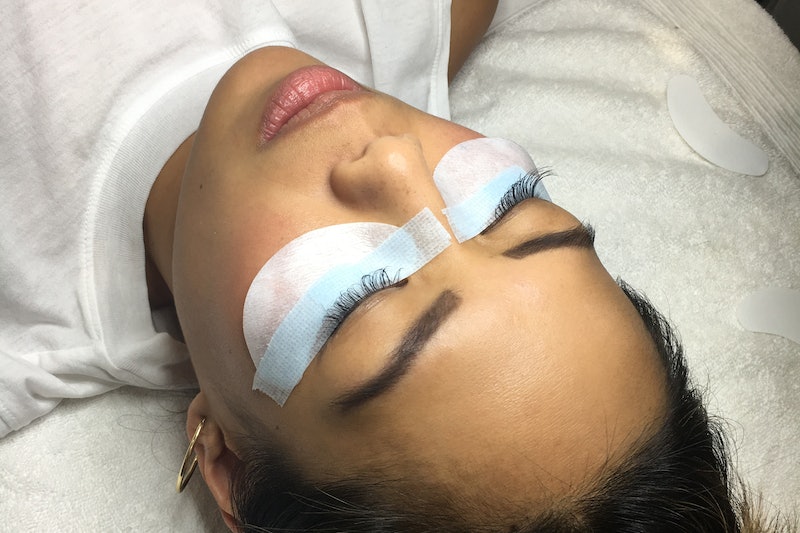 I am in a very serious and committed relationship with a woman named Courtney Baker. She is not my romantic partner (I have a husband); she is my eyelash extensions lady. I see her religiously, every two weeks, and never miss an appointment between my fills. In fact, I see Baker more often than I see my own mother and spend more one-on-one time with her than I do with most of my good friends. And while I sometimes feel guilty about it all — particularly the $120 it costs me a month to maintain and the countless hours spent laying horizontally on a table getting individual lashes glued onto my eyelids — it's always worth it to me in the end. After every appointment, I walk over to the mirror and instead of my naturally short, thin, and barely-visible lashes, I see long, voluminous, perfectly curled hairs staring back at me. I breathe a sigh of relief at the sight of them — I love them so much. More importantly, I love the way they make my small Asian eyes stand out. If I'm being honest with myself, that's the real reason I am so addicted to eyelash extensions, and, apparently, I'm not the only Asian woman who feels the same way.

A lot of Asian women, both those who grew up in Asia and those born in the United States, have a complicated relationship with our eyes. Based on my conversations with other Asian women, a vast majority of us grew up mastering "tricks" for how to make our eyes look bigger, more expressive, more "white." In more extreme cases, Asian women undergo double eyelid surgery to add a more visible crease to their eye. It's a super common practice in Asia among young women — according to the South China Morning Post, the plastic surgery market will double to $116 billion in 2019 in China, with double-eyelid operations being the most sought-after procedure.

While double-eyelid surgery is not as common in the United States as it is in China, Japan, and Korea (statistics for eyelid surgery have remained fairly stagnant in the U.S. over the last two decades, and it's a procedure that's typically only done for rejuvenation purposes for older patients whose eyelids begin to sag), eyelash extensions have become an easier, less invasive, and less stigmatized way for Asian American women to achieve similar wide-eyed results. Yvonne Young, a San Francisco-based marketing manager, tells me that her entire family has gotten double-eyelid surgery "to get bigger looking eyes" but that she believes eyelash extensions are the less permanent way of achieving that same goal. While this is not the only reason Asian women are getting eyelash extensions, for many of them, it remains one of the primary motivations — when you have a monolid, your skin can often hide some of your eyelashes and even parts of your eye, so in addition to making your lashes longer and fuller, extensions are also a temporary way to help transform your eye shape.

Though you may have only recently started hearing about eyelash extensions, women have been on the search for longer, fuller lashes for centuries. According to Racked, one of the first documented cases of lengthening eyelashes was in 1899 when a newspaper reported a procedure involving transplanting hair from the head to eyelids. False lashes would flourish in the early 1900s among movie actresses, thanks, as the New York Times reported, to a Canadian woman named Anna Taylor, who invented them in 1911. However, the more modern treatment of gluing individual lashes onto eyes as we know it did not really become popular until the early 2000s in Asia. An article from Telegraph UK reported that the trend of eyelash extensions was "sweeping" Japan in 2008. By 2013, it became a booming business across the sea in the United States, with women founding Drybar-inspired eyelash extension salons, like Anna Phillips' The Lash Lounge. These days, you'd be hard-pressed to find a nail salon or spa that doesn't offer eyelash extensions as a service.

Although there's no hard evidence that proves Asian women make up for the majority of people receiving eyelash extensions in the United States, when I put a call-out to speak with Asian women who shared my obsession with the service, my inbox was flooded with responses. Although the origin of making your eyes look bigger, and therefore "whiter," is arguably problematic, the women I spoke to are reclaiming the service.

"I got my eyelash extensions virginity taken away about a year and a half ago and after that, I never stopped," Sharon Pak, ColourPop's Marketing Manager, tells me over email. "In the beginning, I was caught off guard. It looked a little intense, but I quickly became obsessed." Pak now gets her lashes filled every three weeks and unless "someone invents something less time consuming and more affordable," she doesn't foresee herself stopping... ever.

The same goes for Heart Defensor, a beauty YouTuber with over 2.2 million subscribers, known for her gorgeous, long lashes. "I feel more complete [with eyelash extensions.] I honestly feel so naked without them now and I don't know how I lived before them," she shares.

Stephanie Huang, a Los Angeles-based brand marketing coordinator, tells me she has had a standing appointment every four weeks since she first got extensions in 2015. "Getting extensions is like a routine for me at this point," she says. "It’s no different than going to get my nails done or getting a haircut."

I was inundated with dozens of responses like these in just a matter of a few hours. And the resounding reason behind their desire for eyelash extensions? The same as mine.

"My natural lashes are a decent length but stick-straight — practically vertical in the opposite desired direction — so they partially concealed my eyes," Tiffany Tse, an editorial marketing manager, tells me. "Extensions really helped to open up and enhance my peepers. I definitely feel more beautiful with lash extensions. Eyes are one of the first features people notice, so I love knowing mine are a little amplified."

Kiok Kang, a beauty publicist in LA, echoes Tse's sentiment. "Most Asian women naturally have monolids or very hooded eyes, which can appear tired," she says. "Traditional Asian beauty standards value big eyes and a small face structure, so eyelash extensions are a non-invasive way to achieve having bigger eyes." Kang also notes that Asian eyelashes are "notoriously stick-straight," something many other women I spoke to mentioned as a reason for getting eyelash extensions.

Mei Lu, a San Francisco-based tech consultant, tells me that her real lashes are "non-existent without mascara, decent with mascara, but super straight and difficult to keep curled." For this reason, she's become obsessed with having fuller lashes, so much so that one time while being abroad in Lima, Peru, she applied fake individual lashes on herself with permanent glue because she could not find anyone who could do her eyelash extensions.

This desperate desire to have long, full lashes is a familiar one for many Asian women. Taylor Osumi, an LA-based publicist, tells me that she pleaded with her parents to let her get them when she was a mere teenager. "I begged my parents for lash extensions for my 15th birthday because I'm that crazy about them. And this was before the lashes and lash glue got better, so all my [natural] lashes fell out," she shares. Though traumatizing, that hasn't stopped Osumi from continuing to get her lashes regularly filled, more than 10 years later.

So many of the women I spoke with tell me that getting eyelash extensions has become more than just a desire, but a necessity for them, a service they see themselves getting for the rest of their lives, no matter how high-maintenance it is.

"I've been in the industry for seven years now, but have been wearing eyelash extensions pretty consistently since 2008 [when I lived in] Korea," says Susie Lee, a Los Angeles-based lash artist. "I don't ever see eyelash extensions going away. I know some women dream of the day that eyelash extensions could last longer, but the extension can only last as long as the natural hair does which is 30-45 days."

Despite the often perceived pressure to flaunt only "natural" beauty, none of these women are ashamed or embarrassed about their love for extensions — myself included. Eyelash extensions make us feel more confident and more beautiful. It helps us get out the door quicker — since we no longer have to apply mascara or eyeliner — meaning we can focus more on our jobs and the other responsibilities of life. And at the end of the day, do we really owe anyone an explanation for why we love eyelash extensions so much? While we may have once felt the need to hide (or lie) about our fake eyelashes, that is no longer the case. All of the women I spoke with tell me that they are completely honest and open about their eyelash extensions, especially when they are asked about them.

"[I am] totally upfront about my lash extensions. Be confident in yourself!" Pak shares.

In a time where more women are supporting women and shaming women for wearing makeup or undergoing cosmetic treatments is finally being recognized as destructive, there is no reason to not embrace our eyelash extensions. For us, it's just another form of self-care. A few of the women I spoke with didn't even make the connection that getting eyelash extensions made their eyes look bigger and rounder — they just get them because they feel more put-together or prettier with them on.

"Women, no matter what age or race, should take the time to do something special for themselves to feel empowered," Lee tells me. "You might get lashes to celebrate a big occasion or even because you had a bad day. Whatever the reason is, I like that women can come to relax, meditate, chat, or even take a quick nap, then leave feeling good about themselves. That's the best part of my job."

As I finish this story, I am scrambling to make it on time for my next fill appointment with Courtney. I wouldn't miss it for the world. Believe me.