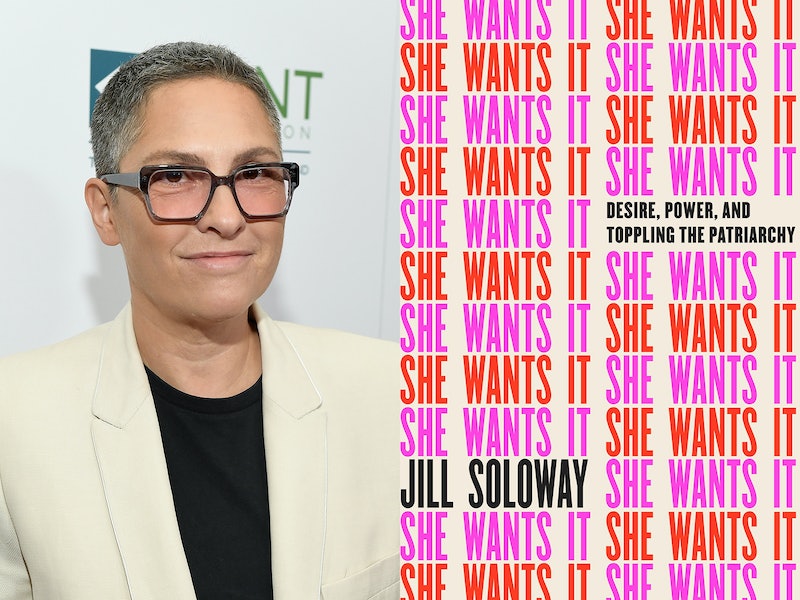 In 2012, writer Jill Soloway arrived at a troubling crossroads. Television-writing gigs had dried up, and the once-prosperous co-executive producer of Six Feet Under had taken to eating cans of Progresso soup from the back of their cabinets, unable to afford anything else. The last hope was a possible spot on the writing staff of Glee. Soloway, who uses gender neutral pronouns, went to the meeting and "blasted it out of the water," as they would later write. But days passed and no contract arrived. The deal never came through. The rejection stung, but it also left them in dire financial straits, to the point that they even considered selling their house.

"I didn’t get hired on Glee, and I needed to start all over," Soloway tells Bustle in an interview. "It was a rock bottom moment, but I think those rock bottom moments can put a fire in your belly to reinvent."

Then, in November, something unexpected happened: Soloway’s father called them to announce that he is a trans woman, and he had a new name, Carrie London.

In her new memoir, She Wants It, Soloway chronicles how Carrie’s transition inspired them to create their most well-known television show, Transparent, which premiered in 2014. Yet Soloway is also refreshingly forthright about what came before that success: The rejections they faced, as well as the confrontations with a system that sets women and gender non-conforming people up to fail, especially those who don’t adhere to traditional depictions of sex and femininity. Soloway began identifying as non-binary three years ago, after deciding, as they write in the book, that "I want to not be cis."

She Wants It: Desire, Power, and Toppling the Patriarchy by Jill Soloway, $27, Amazon or Indiebound

During the first part of their career, Soloway writes that they "stayed comfortable with almost there." While running the writer’s room on the United States of Tara in 2010, for instance, they remember having “a frustrated feeling in my belly,” that wouldn’t subside, no matter how much praise they received from their colleagues. Leaving that comfortable space meant taking a risk.

Soloway stopped trying find a new writing job, and in 2013 debuted her first feature, Afternoon Delight, instead. “Almost there” wasn’t enough for Soloway anymore. In the book, they admit that they thought the movie was a “masterpiece” and daydreamed about receiving a standing ovation and about sparking a “bidding war“ once the film screened at Sundance. Instead, Soloway faced down a negative review "from a guy at an important trade paper" (she doesn't specify the name of the publication in our interview or the book). According to Soloway, he dismissed their vision, “like a farted pfft...out of the side of his mouth," they write. Soloway felt devastated by the review, and wondered what would have happened had a woman been assigned to review their film, but now thinks of bad reviews as a rite-of-passage for the "grown-up artist."

“I remind myself that I’m writing about an unlikeable woman, not the usual propaganda about women. That amendment is going to annoy all men,” she says during our interview. “It would be one thing if I was to make the perfect version of Desperate Housewives, but I’m trying to break those tropes.”

Soloway used the less-than-warm reception as fuel to continue writing stories about unconventional types of femininity and womanhood. Almost immediately upon returning from Sundance, Soloway was ready to pitch Transparent. Once again, they had unshakeable faith in their creation. Soloway writes that she took the show to all the major networks — including HBO, Showtime, Netflix, FX — but the executives offered excuses and polite apologies. Soloway never had a moment of doubt though; they felt that Transparent was “predetermined” to succeed. At last, Amazon expressed interest, and Soloway began shooting the pilot.

Soloway is aware that the gatekeepers of the art world are mostly white men, which makes it even more difficult for diverse voices to get the attention they deserve. While Soloway’s offices are staffed by mostly queer and trans folks (who also make up much of the crew of Transparent), Soloway has another idea about how to change the status quo: They don’t want to see a 50/50 equal split between men and women in every industry. Soloway thinks men need to stop working for 100 years — at least.

“I’m always thinking what the flavor of the word genius means. My parents listened to classical music when I was growing up, and I knew that classic music was created by geniuses. Imagine that all of that music was composed by women. How would you feel as an eight year old boy? That’s what we had as girls,“ Soloway tells Bustle. “We were the thing that was not genius. Women are going, ‘Hold on a second, we were raised in a world where we were not included with the makers of reality.’ It's like we were infected with a virus that said you didn’t make music, you didn’t make the bible, you aren’t the son of god. We need to do that [to men] on a huge scale for 100 years before we get anywhere near an equal society.”

This idea doesn't exactly square with the fact that Soloway hired a cis man, Jeffrey Tambor, to play a trans woman on the show, a decision for which she faced immediate backlash. In the book, they recount a screening of the pilot, where one audience member accused the show of depicting "transface." Soloway had already hired filmmaker Rhys Ernst and writer Jenny Finney Boylan, both of whom are trans, to help develop the project, but she kept Tambor in the lead role despite the criticism.

In February of this year, Amazon decided to fire Tambor following allegations that he mistreated trans women on set, a decision which Soloway writes "shocked" them. However, looking back, Soloway recognizes Tambor's "power on set, coupled with his temper, and sexual suggestiveness," likely transformed him into someone his colleagues feared. The show will end after it's upcoming fifth season, but Soloway remains committed to offering her alternative to mainstream entertainment: Shows which brilliantly undermine patriarchal stereotypes about sexuality and marriage in particular. Part of her process is also sharing stories from the lowest points in her career, not as a way to brag about how successful she turned out to be, but to share the very real pitfalls that all creators, especially those in marginalized communities, experience when they share their innermost passions with strangers.

“Right now, our politicians are misusing power so we have to ask ourselves: What would be opposite of that be?“ Soloway says. “Being open to criticism and leading with our vulnerability."

This is an on-going learning process for Soloway, but with maturity has come success: At 50, they attended the Emmys for the first time, met Katy Perry, went to the White House with Carrie, whom she affectionately calls “moppa,“ and now uses their platform to elevate the voices of trans actors and writers. But, according to Soloway, that kind of growth can’t happen for any artist if they’re looking for outside validation — which means letting go of society’s idea of what success looks like.

“If you’re really making art for yourself, then the process has integrity,” Soloway explains. “It’s so important for women especially, because they’re checking signals from men that they’re performing a certain version of femininity. Look back inside yourself and pull out your truth. If you just connect to your idea of truth, you’ll become your real muse inside, and outside.”

More like this
The 'Lady Chatterley's Lover' Book Leaves Us With A Troubling Question
By Catharina Cheung
Liz Feldman Explains The 'Dead To Me' Series Finale & Fan Theories
By Brad Witter
The 'Firefly Lane' Book Ending Teases Way More Tears To Come In 2023
By K.W. Colyard
Allie Rowbottom Will Have Her Feminism With A Side of Botox
By Samantha Leach
Get Even More From Bustle — Sign Up For The Newsletter