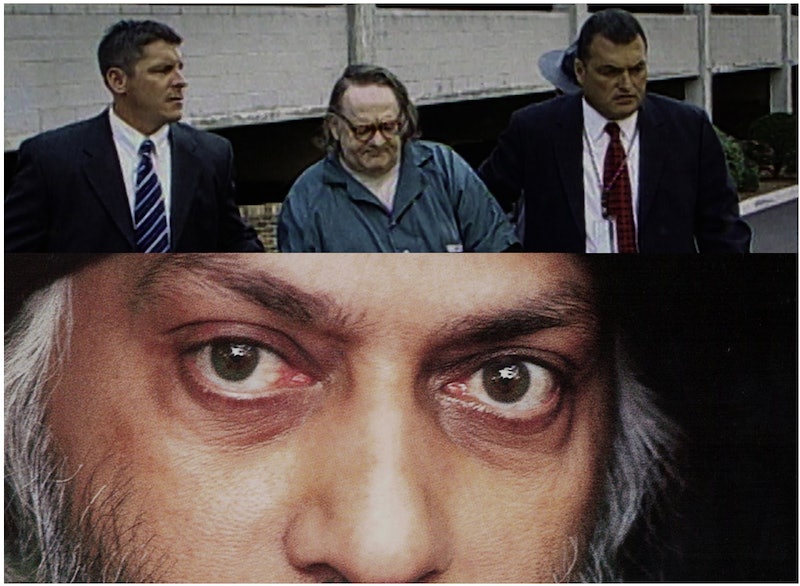 Flip through the television channels at any hour of the day, and you're basically guaranteed to find some kind of true crime programming, whether that's Dateline, or Law & Order True Crime, or just about any of Oxygen's programs. Streaming services have dozens of selections within the genre, from Netflix's hit docuseries Wild Wild Country to HBO's compelling investigation into Robert Durst, The Jinx. And Netflix just announced two more additions to the growing genre, in the form of three new episodes of one of the early true crime phenoms The Staircase, plus another new series, Evil Genius, making it even clearer that audiences are still hungry for more of these grim stories. But where does this fascination come from, and how did it start?

Though the 2014 podcast Serial was far from the first true crime entertainment, its popularity reignited the public interest in these types of stories. Episodes of Sarah Koenig's investigation into the 1999 murder of student Hae Min Lee were downloaded an estimated 40 million times as of December 23 of that year; a massively popular subreddit was dedicated to solving the case. Saturday Night Live featured a skit mocking the show. Slate even ran a podcast dedicated solely to discussing Serial.

Since the show's popularity, there has been an explosion of true crime TV shows, podcasts, documentaries, and more that seek to recreate the podcast's success. And audiences have lapped these murder-filled narratives up. Netflix's Making a Murderer, a docuseries that sought to prove the innocence of Wisconsin man Steven Avery, became a national obsession. The finale of The Jinx, an HBO series about alleged murderer Robert Durst (who confessed to the crimes on a hot-mic during the finale), drew over one million viewers. The No. 1 podcast on iTunes as I write this piece is currently the newest true crime show from the Sun Sentinel Media Group, Felonious Florida. By now, to say that audiences are obsessed with true crime is an understatement. But why are they, and why now?

This shift may not actually be as dramatic or sudden as it appears. Dr. Gail Saltz, a psychiatrist, psychoanalyst, and author of the book The Power of Different: The Link Between Disorder and Genius, says it's not that audiences are suddenly more interested in crime stories than they were before, but rather that this interest has now become more acceptable.

"To some degree crime and true crime has always been fascinating to people of previous generations, it just had to be more sanitized," Dr. Saltz tells Bustle. "Like [with] Jack the Ripper, we’ve always had these fascinations, it’s not new. It’s just that [now] it’s accessible to watch and participate in all kinds of things, and people aren’t saying, 'You watched what?' They’re going, 'Oh yeah, me too, yeah that’s my guilty pleasure.'"

Perhaps what has changed isn't the audience appetite for true crime, but the media landscape itself.

It's true that in some sense, Americans have always had a fascination with crime stories. The 1995 televised O.J. Simpson murder trial was a national media spectacle, with Time reporting that about 57 percent of the country tuned in to watch the final verdict. Truman Capote's In Cold Blood was a national best-seller when it was published in 1966. And The Atlantic points out that "The rapid turnover of crime stories isn’t necessarily unique to the 21st century. In the early 1900s, American tabloids were filled with grisly tales of triple slayings, decapitations, and executions that would be forgotten weeks later."

Perhaps what has changed isn't the audience appetite for true crime, but the media landscape itself. Dr. Sarah Sobieraj, a sociology professor at Tufts University and the director of the Digital Sexism Project, believes that the relationship between the amount of true crime programming and the audience desires for these stories isn't necessarily causal.

"One thing we know sociologically is if you look at the media industry and the way that it works... I think that it’s a mistake to see it as a direct reflection of audience demands," Sobieraj explains to Bustle. She contends instead that the popularity of Serial and shows like The Jinx caused media companies to attempt to recreate that success with new but similar programming, which accounts for the spike in true crime television, films, and podcasts. Reporting by Rolling Stone pegged to the obsession with Netflix's Making A Murderer supports this hypothesis:

"I've never been busier," says documentarian Joe Berlinger, whose Paradise Lost: The Child Murders at Robin Hood Hills (co-directed with Bruce Sinosfky), has been cited by Murderer's filmmakers as a primary influence. "Crime has always been a staple of television, but I've never been approached more by the networks. I get phone calls: 'I want Serial, but with X,Y, and Z.' 'We want the next Jinx."

Profit also helped drive up the sheer number of true crime programs. "The other thing that’s really appealing about a true crime story as a television vehicle compared to a drama is that it’s cheap to produce, I mean relatively speaking," Sobieraj explains. "So that’s always been, that’s a factor too. So in that elaborate calculation of what works, it’s not that networks won’t put a lot of money into expensive content, but they have to be really confident that it’s going to be successful, so the bar is going to be a little lower with something like a true crime story."

Yet this formula wouldn't work for networks if there weren't an appetite for crime stories. Even if the preoccupation with murder isn't a new facet of the American psyche, it remains a fascinating one. Dr. Saltz believes that part of the human drive to watch, read, and listen about crime stories stems from a desire to explore a darker side of our personalities.

"I would also say that you know, pretty much everybody has a certain amount of both sadistic and masochistic fantasy life and urge," she explains. "You know, most of us socialize it to something that is socially acceptable, so you know, we might think about certain things but we would never do certain things. But those urges are somewhat satisfied by looking at, and in that way emotionally participating in, you know, any content."

If colonial Americans were fascinated by witch hunts, medieval Europeans by public executions, and ancient Romans by gladiator fights, perhaps true crime provides us with a modern-day dose of violence without actually requiring us to bear witness or participate in it in real-time. The urge to witness violence is neither novel nor unique — rather, it's the invention of television, film, and social media that allows us to socialize those cravings for violence into a merely observational role. As Dr. Saltz explains, "You’re not in the crime. You’re not doing it. It’s still safe, and because it’s also on the screen and they blend and feel acceptably unreal in the way that a drama TV show is."

But the dawn of social media has brought a participatory element back into the way we experience true crime. Now, fans don't need to rely on law enforcement or documentarians to gather evidence or uncover the truth about a crime. With social media, anyone can crowdsource information, search for witnesses, and create elaborate theories. Internet sleuths, often inspired by true crime programming, take to Reddit, Facebook, and websleuths.com to trade evidence and theories about popular cases.

True crime provides us with a modern-day dose of violence without actually requiring us to bear witness or participate in it in real-time.

Sometimes, these sleuths can become obsessive. In Netflix's The Keepers, a docuseries about the murder of Baltimore nun and schoolteacher Sister Cathy Cesnik, Gemma Hoskins and Abbie Fitzgerald Schaub, former students of Sister Cathy, spend most of their time digging for clues about their teacher's murder on Facebook and in the library archives. This fits the pattern laid out by Dr. Saltz regarding obsessive sleuths.

"Well it could be anything from the person is a very obsessional person already," says Saltz. "[Or] it could be because there is something about this content that actually does resonate [with] something in their past."

For other internet sleuths, it's the thrill of the mystery that draws them to true crime and to online forums. James Renner, author of the book True Crime Addict: How I Lost Myself In The Mysterious Disappearance of Maura Murray, chronicles the years of his life he spent trying to personally solve the case of the University of Massachusetts student who disappeared after crashing her car in New Hampshire. After his attempts at in-person interviews and detective work were mostly fruitless, Renner turned to the internet. The author became entrenched with online tips and conspiracies on his personal blog, and, despite the pain these rumors caused the Murray family, The New Yorker writes that "He posted every rumor sent his way, no matter how scurrilous or unhelpful." Internet sleuths like Renner often become determined to solve the case themselves, no matter the cost of those actually involved.

"It’s like participating in the TV version of being a detective, so on the crime show it looks sexy and fun and usually gratifying. You’re brilliant, you solved it, you got in there, you didn’t get hurt, you’re the hero. And tapping into that part is enjoyable," explains Dr. Saltz of this phenomenon. "Solving the puzzle, feeling smart, feeling that you saw something, got something that other people didn’t get, all of that but without the reality of it." For these sleuths, murder cases present a tantalizing, real-life whodunnit.

Whether or not audiences feel compelled to participate in crime-solving online, they are still consuming true crime programming at staggering rates. And it is the combination of business and human perversity that drives this growth, creating a feedback loop in which crime shows become successful because audiences, on some level, are titillated by murder and violence, and networks attempt to recreate this success.

Yet what's clear is that this fascination with violence and crime is nothing new. Perhaps it's just a fundamental part of human nature that, in screens and earbuds and subreddits, has found a new outlet.