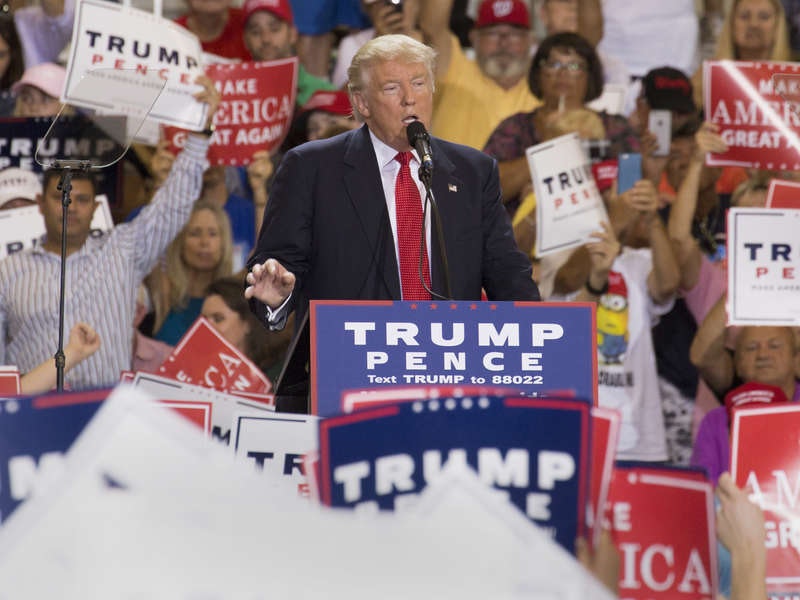 The year has just begun, so 2017 still has a lot left in store. It doesn't take a a prognosticator to know that one particular event that occurred during the previous year will have reverberations across the current one. Donald Trump was elected president of the United States in 2016, and the effects his rise to political power has had on both the nation's policies and its general mood are momentous and unprecedented. I'm one of the many who wakes up every morning wondering how and why this happened, and that feeling won't subside as long as rights are being stripped away and unqualified individuals are appointed to influential posts. So though it covers a campaign that already took place, Trumped: Inside The Greatest Political Upset Of All Time sums up 2017. The doc is currently available on demand on Showtime and streaming on the Showtime Anytime app.

The film was produced by former political journalists Mark Halperin and John Heilemann, who were also on the team that created Showtime's 26-episode docuseries on the 2016 election, The Circus. The first episode of The Circus is called "The Outsiders" and focuses on the "Hail Mary" campaigns of three candidates who didn't appear to have had much of a shot of out-pacing their more established counterparts: Bernie Sanders, Ted Cruz, and Donald Trump.

From "outsider" to the nation's 45th President, Donald Trump and his bewildering success are the subject of this spin-off film. Or maybe that's the wrong way of looking at it. Trumped seeks more to get a handle on the Trump voters: those Americans who felt their candidate was speaking truth they'd been waiting to hear from a leader; couldn't be dissuaded from supporting him no matter how many offensive statements he made or behavioral red flags he proudly waved; and enabled the candidate to not only stay alive in the campaign, but to transform from a late-night talk show joke to a serious front-runner.

Whether you were shocked by the outcome of the election or not depends in no small way on your privilege. Trumped features incendiary shots of frothed up crowds at Trump's rallies, some wearing and shouting racist, sexist, and xenophobic sentiments. Images like these went viral during the election, but they are still a sobering reminder that many Americans incorrectly assumed that this rhetoric wouldn't be popular enough to win an election in "the land of the free." Meanwhile, marginalized populations have always been more keenly aware that prejudice has not lost much power in the last few decades.

It's a challenge to equate the 2016 election with the American political process as it's taught in most high school civics classrooms. Trumped and Trump's election have taught me that it's a much more fragile system than I have always assumed. And in order to understand why much of the country will spend the next year and so on resisting the changes this administration will attempt to make to the American way of life, it's vital to understand where it failed.

More like this
Gassed Up Promises All Things Action, Risk, & Redemption
By Frances Stewart
Taylor Swift Wanted To Be In 'Twilight: New Moon,' According To Its Director
By Grace Wehniainen
Jonah Hill Explains How His Anxiety Attacks Will Change The Rest Of His Career
By Grace Wehniainen
Here’s Where Manti Te’o Is Now
By Arya Roshanian
Get Even More From Bustle — Sign Up For The Newsletter