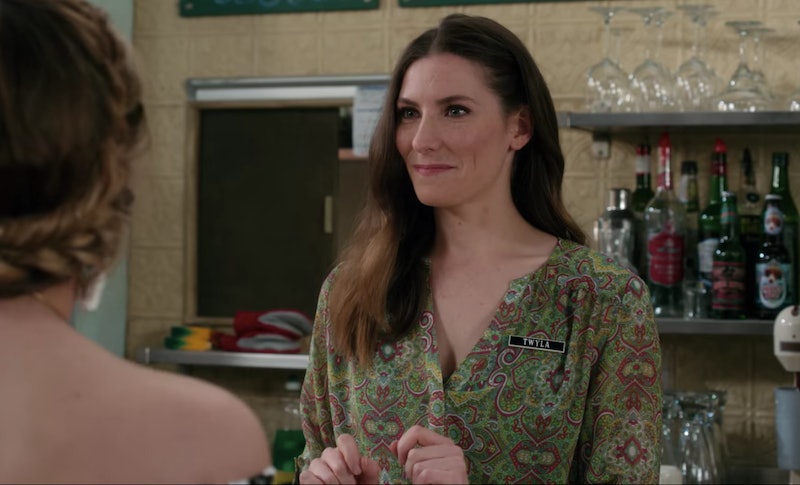 When the Roses first arrived in Schitt's Creek, they were undeniably a mess. They'd just lost their fortune, Moira was rarely sober, and she and Johnny hardly spoke to their children, both of whom were shallow and self-obsessed. But to Twyla Sands, the peppy local waitress with a dark family history, they had something she never did in her own home life: each other.

"As dysfunctional as they seem to each other and to us at the beginning, [Twyla is] looking at this family as two parents that are still together, they still love each other, they all live in a motel together — for the most part, decently happily," Schitt's Creek star Sarah Levy, who plays Twyla, tells Bustle.

With her father in prison and her mom busy overspending on snowmobiles, Twyla has eventually come to see Johnny and Moira as surrogate parents. "These are people that have kind of blown into her life and helped her just as much as she's helped them," Levy says.

In turn, Twyla has quietly pushed the Roses to grow into better people. "She is this glimmer of hope in this sort of dreary town — or as the Roses are seeing it, anyway," Levy says. Think of her like the Schitt's Creek version of Cheers' Sam Malone: the person sitting behind the bar listening to everyone's problems, even when she's often dealing with bigger challenges of her own.

After spending six seasons scrambling to regain their fortune and lavish lifestyle, the Roses have softened into kinder, more generous people. But it's Twyla who ultimately proved that money is truly subsidiary to happiness. In the series' penultimate episode, she revealed to Alexis that she secretly won $46 million in the lottery several years ago, but "was still working at the cafe as though nothing had changed," Levy points out. "She's so content with her life as is, that money is an extra bonus."

As for what the future holds for Twyla after Schitt's Creek comes to an end on April 7, Levy thinks her character will stay in town for the rest of her life. "She knows everyone, and she loves working at the café, and she loves the connections that she has there and the familial aspect of being the only real restaurant in the town," Levy says. "I hope that she finds a wonderful guy and settles down and has some kids! And lives in a little cottage with a white picket fence."

More than anyone else in Schitt's Creek, Twyla deserves a happy ending.

More like this
How Much Are The 'Schitt’s Creek' Stars Worth?
By Hugh McIntyre
Here’s Where You Can Stream 'Schitt's Creek' After The Comedy Leaves Netflix
By Brad Witter
‘SNL’ Finally Spoofed Nicole Kidman’s Weirdly Beloved AMC Ad & Nailed It
By Stephanie Topacio Long
Jonathan Bailey’s BTS ‘Bridgerton’ Photos Celebrate 6 Months Of “Kanthony”
By Stephanie Topacio Long
Get Even More From Bustle — Sign Up For The Newsletter