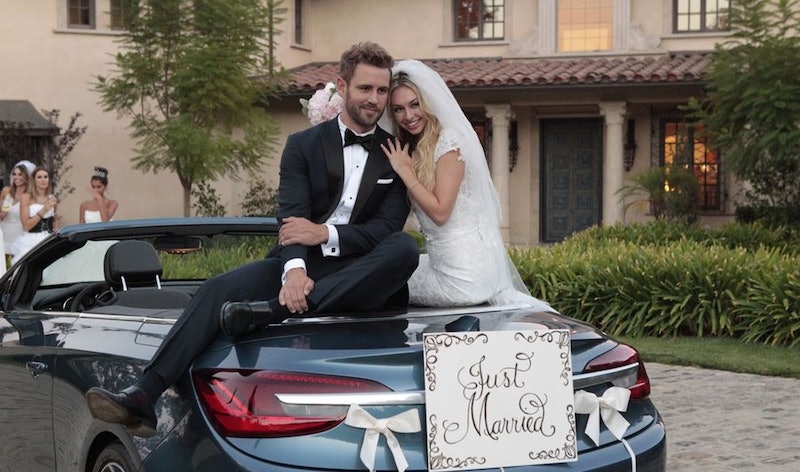 If that photo of a certain The Bachelor contestant wearing a certain piece of jewelry on a certain digit left you scratching your head, you can give your scalp a rest. Yes, we have an explanation. Just as my colleague Marenah Dobin suspected, Corinne Olympios’ mysterious engagement ring was not from Nick Viall. Yes, it was an engagement ring, but it was not her engagement ring. As E! News confirmed, the ring on Olympios' finger belongs to Claudia Oshry (aka @GirlWithNoJob), and The Bachelor villain simply happened to have it on while they posed for a picture together. And that is that.

My goodness, I am so grateful for Olympios and everything she brings to Bachelor Nation. The bouncy castle gambit? Magnificent. Her love of “cheese pasta”? Phenomenal. Saying the word “poopies” no less than three times in one talking head? The stuff of dreams. Her soliloquy about naps? I need it on a t-shirt. Wearing someone else's engagement ring while her The Bachelor storyline's still unfolding? Iconic.

"[Corinne and I] were hanging out Friday night and, since I just got engaged, I was letting everyone try my ring on. We were having so much fun, taking photos, drinking — we didn't even realize until every website was calling me and writing it up! No spoilers here, just a funny mixup!"

Look, I’m not trying to call shenanigans here, but if Olympios said she did realize she had the ring on when the pic was snapped, I would not be surprised. This easily could’ve been just another one of the tricks she had stored up the sleeve of her oversized trench coat, another classic Corn move, etc., you know?

I mean, come on. We're talking about the person who more or less made a can of whipped cream appear out of thin air before sitting down with Viall during cocktail hour. The person who tossed her shovel aside, climbed under a fence, and sat on a rock while the other contestants continued to scoop up cow poo. The person who napped through a rose ceremony. The person who threw caution and her bikini top to the wind during a group date. She knows how to get lips moving. So no, I wouldn't be shocked if she deliberately posed with this ring.

But hey, it appears to be nothing more than an unintentional gaffe. And more power to her. Olympios keeps things interesting even when she isn't trying. Ugh, Corn is such a legend. May her Bachelor Nation career be long and prosperous.