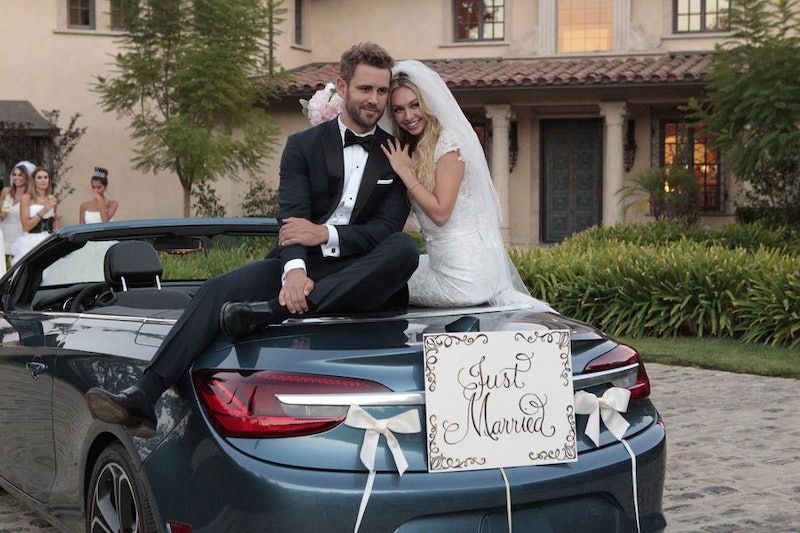 Being a so-called "villain" on The Bachelor has become a little formulaic. The chosen contestant often "plots" against the other women in the house by attempting to spend more time with the Bachelor, spreads rumors about fellow contestants to the Bachelor, talks about how great they are compared to the other contestants, etc. Not a lot had changed about getting the villain edit until Chad Johnson was on The Bachelorette and just sat around eating lunch meat, talking about how much he loves milk, and saying that he was going to cause severe bodily harm to the other contestants. He was a Bachelorette villain for the social media age, and now, Corinne Olympios is a new kind of Bachelor villain.

Producers set Corinne up for the villain edit pretty early on, documenting how she is a “businesswoman” who runs her family’s business, is 24 and still has a nanny, and how she thinks very, very highly of her sexual prowess and her "platinum vagine." Also, I don’t believe that editing can truly change how a person is portrayed on television. Sure, there’s so much editing that goes into making a show like The Bachelor, but producers can’t edit sequences together from thin air. The scenes have to exist to put them together, so if Corinne is pieced together as a "villain" on Nick’s season of The Bachelor, the raw materials likely are there to do so.

Here’s a list of the grievances that the other women have so far against Corinne — she was the first person to kiss Nick on arrivals night, she took her top off on a group date and pressed Nick’s hands onto her chest, she interrupted other contestants' time with Nick in order to spend more time with him, and she got mad and picked a fight with a contestant who interrupted her time with Nick. Later in the season, previews have shown that Corinne shows up at Nick’s hotel suite door looking for a late night hookup, and I’m sure the women wouldn’t be happy about that either.

Take, for instance, Corinne’s weirdly profound speech about how you only can look out for yourself on reality television shows. At the group date, she said:

Not only does Corinne have a large sense of self-confidence, she’s also really self-aware and in tune with the situation she’s placed herself in. I don’t agree with, oh, 90 percent of what she’s done on the show so far, but I can’t fault Corinne in what she said in that speech.

I like watching other Bachelor villains because they seem, in part, out-of-touch — remember Kelsey from Chris' season? Or Olivia from Ben’s season? But, Corinne knows what she’s doing, she knows who she is, and for better or for worse, she’s taking that as far as she can on Nick’s journey for love. And, that makes her the most interesting Bachelor "villain" in a long time.