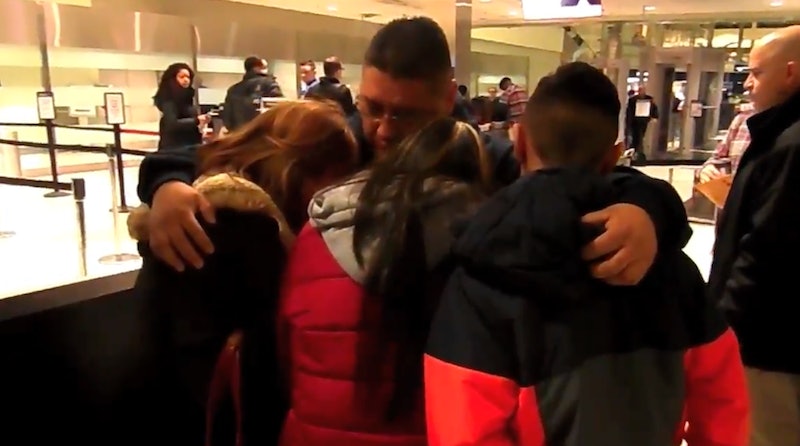 After Immigration and Customs Enforcement officials decided to deport a Detroit man after he had lived in the U.S. and sought legal status since childhood, questions have swirled around the case. Now, ICE has given an answer on why Jorge Garcia was deported.

ICE spokesman Khaalid Walls claimed that the deportation was justified because anyone who was determined to be violating immigration laws could reasonably be arrested, detained, and deported, if a final order found them to be removable.

Garcia, who arrived in the U.S. at age 10, had been living in the country for nearly three decades; when DACA was instituted, he was already too old to apply for the program. He built a career as a landscaper in Detroit, and had a clean criminal record besides his violation of immigration law. The deportation order, which states that Garcia is not allowed to re-enter the U.S. for 10 years, forced him to leave his wife and two children behind.

"I feel kind of sad. I got to leave my family behind, knowing that they're probably going to have a hard time adjusting. Me not being there for them for who knows how long. It's just hard," Garcia told the Detroit Free Press.

Garcia and his wife, Cindy, had spent $125,000 on legal fees attempting to gain legal status for him, but their success only ever amounted to temporary reprieves. Cindy was born in the U.S. and thus is an American citizen, but having an American spouse does not necessarily qualify an immigrant to receive legal status.

The couple has two children, ages 12 and 15, and Garcia said that their 12-year old son, Jorge Garcia Jr., has taken his father's departure particularly badly.

Cindy also spoke to CNN about the experience of having her husband deported.

As depressed as I am, and I just want to scream and cry and lay in bed and not move, I know that I have to come forward for the people who cannot and tell our story.

The decision to deport him, she explained, came from a lawyer's error in the paperwork that they submitted.

Garcia did stress that she would immediately begin working to bring her husband back to the U.S.

He is sad. He's depressed. He's entered a country he does not know because he hasn't been there since he was 10 years old.

The decision to deport Garcia put him in the same position of thousands of other immigrants from various countries that the Trump administration has taken action to remove from the U.S. Besides ending programs like the ones that allowed Haitians, Salvadorans, and Nicaraguans to remain in the U.S. with temporary protected status, the administration has also pledged to "look to apprehend" anyone in the country illegally. This applied to Garcia, despite the fact that he is married to an American citizen and has no criminal record. This directive, based on a strict reading of the immigration laws, is essentially now what ICE officials have used to justify Garcia's removal.

After his story went viral, protestors showed up at the Detroit Metro Airport with signs imploring ICE to "Stop Separating Families." The decision had already been made, though, and so Garcia had to leave the country while his family remained.