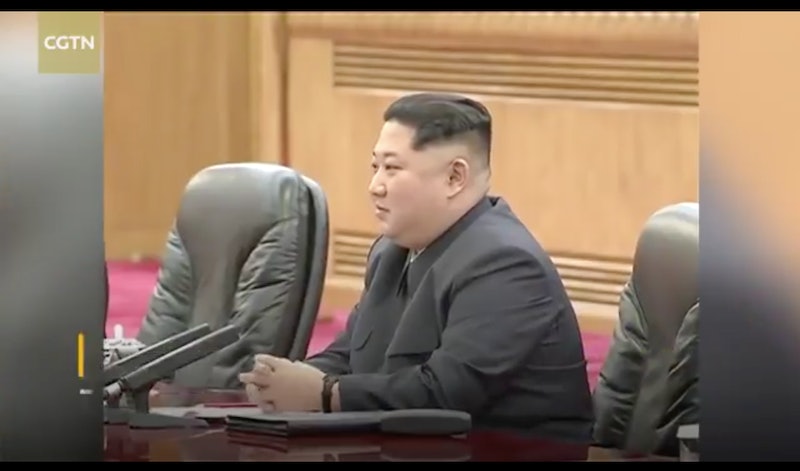 On Tuesday, both Chinese and North Korean media confirmed speculation that North Korea's leader was in China earlier this week. The visit was relatively secretive in nature, leaving many to wonder why exactly Kim Jong Un was in China. As it turns out, Kim met with China's president, Xi Jinping, reportedly as a means of preparing for historic upcoming meetings with the United States and South Korea. As the New York Times reported, the visit constitutes Kim's first international trip since he assumed power in 2011.

China's Xinhua News Agency reported that Kim visited China from Sunday through Wednesday. The visit was considered "unofficial" and involved Kim meeting with Xi, Chinese Vice President Wang Qishan, Premier Li Keqiang, and other officials at the Great Hall of the People in Beijing. Kim was accompanied by his wife, Ri Sol Ju, and several senior advisors. According to North Korea's Korean Central Television (via the New York Times), the invitation for the meeting came from Xi.

According to CNN, China and North Korea have been historic military allies. However, the countries' relationship has been quite strained since Kim took power, partially because of China's acceptance of international sanctions against North Korea. The meeting between Xi and Kim, though, could mean all that hostility is subsiding. As Tong Zhao, a North Korea expert at the Carnegie Tsinghua Center for Global Policy in Beijing, told CNN,

[North Korea] wants to have some insurance against this upcoming summit meeting with President Trump ... They know the meeting is very important but also very risky, there are a lot of uncertainties ... If the meeting fails the US could declare that diplomacy has failed and shift to a more coercive approach or even a military strike ... A stable and positive relationship with China would prevent the US from launching a military strike.

And sure enough, the statement Kim released after his meeting with Xi seemed to indicate that the upcoming summits were indeed the focus of discussion. According to Xinhua News Agency, Kim confirmed after the meeting with Xi that the summits would indeed take place and that discussing denuclearization of the Korean peninsula could be a possibility. As Kim said (as reported by Xinhua):

If South Korea and the US respond to our efforts in good faith, build a peaceful and stable atmosphere, and adopt phased and simultaneous steps for peace, the issue of de-nuclearisation on the peninsula can be resolved

Earlier this month, President Trump accepted an invitation to a meeting with Kim — an invitation which was conveyed to him by South Korea. However, on March 9, the White House emphasized that there were conditions that would need to be fulfilled before the meeting could occur. During a press briefing, Press Secretary Sarah Huckabee Sanders noted that Trump would not meet with Kim unless North Korea takes "concrete and verifiable actions" toward denuclearization, as CNN reported.

The White House released a statement following Kim's visit to China, signaling the meeting was successful in further opening the door for a meeting between Trump and the North Korean leader. As the White House noted:

The Chinese government contacted the White House earlier on Tuesday to brief us on Kim Jong Un’s visit to Beijing. The briefing included a personal message from President Xi to President Trump, which has been conveyed to President Trump.

We see this development as further evidence that our campaign of maximum pressure is creating the appropriate atmosphere for dialogue with North Korea.

The implications of Kim's China meeting will likely soon be seen firsthand. According to the New York Times, Kim is scheduled to meet with South Korean president Moon Jae-in in April at the Korean border. The North Korean leader is also supposed to meet with Trump by May, though the location and date of the meeting has not yet been determined.