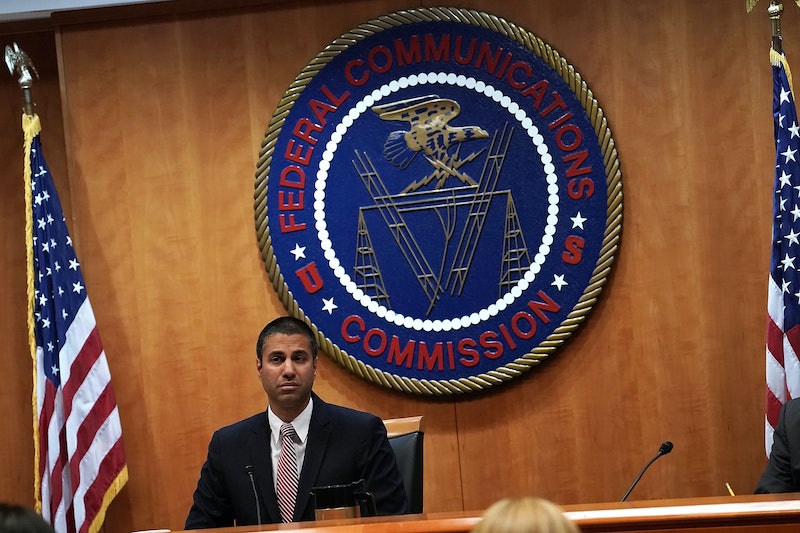 Lots of internet consumers have been restlessly awaiting the Federal Communications Commission's vote on repealing the rules that made the web "free and equal." But on Thursday, right before the net neutrality vote happened, the hearing was evacuated for "security" purposes.

In the middle of its meeting — which nearly 100,000 viewers watched online — the commission was forced to take a pause. Shortly before 1 p.m. ET, all FCC commissioners, as well as reporters and everyone else present for the hearing, exited the room and left behind their belongings. Journalist Edward Graham reported that "everyone in room moved to main hallway near building security entrance."

The commission said that it was acting on behalf of the Federal Protective Service. NBC News reported that "what appeared to be a bomb sniffing canine," as well as law enforcement officers, swept the room after the evacuation.

"On advice of security, we need to take a brief recess," Ajit Pai, who chairs the commission, said while reading out his statement on the impending vote. But the pause didn't last long, and the meeting resumed at 1:02 p.m. ET. "Sorry for the interruption," Pai said. "We were acting on the recommendation of the Federal Protective Service. But we can now reconvene." He did not elaborate on what, if any, threat was reported by security.

The move takes away the Title II classification for broadband internet, which required broadband to be treated like a public utility. That classification had prevented internet service providers from blocking websites or prioritizing the loading speeds of some sites over others. Consumer advocates worry that providers will exploit customers now that such protections are not in place.

"In a world without net neutrality, activists may lose an essential platform to organize and fight for change, and small organizations may never get a fair shot to grow and thrive," ACLU Director Ronald Newman said in a statement last month.

"Particularly damning is what today’s repeal will mean for marginalized groups, like communities of color, that rely on platforms like the internet to communicate, because traditional outlets do not consider their issues or concerns, worthy of any coverage," Commissioner Jessica Rosenworcel said in her dissenting statement, which continued:

It was through social media that the world first heard about Ferguson, Missouri, because legacy news outlets did not consider it important until the hashtag started trending. ... And it has been through secure messaging platforms, where activists have communicated and organized for justice without gatekeepers with differing opinions blocking them.

A majority of Americans support net neutrality, and the rules are popular on both sides of the aisle. As the FCC's vote approached, citizens flooded the commission's website with comments that argued against repealing net neutrality rules. In her own dissenting statement, Commissioner Mignon Clyburn argued that the FCC had not taken that public feedback into account.

"I hold in my hand letters that plead with the FCC to keep our net neutrality rules in place," she said in the statement. "But what is striking and in keeping with the new norm, despite the millions of comments, letters, and calls received, this Order cites not even one. That speaks volumes about the direction the FCC is heading. That speaks volumes about just who is being heard."

Although the FCC has now voted to end net neutrality, it will still take some time for the change to be recorded in the federal register. Expect the fight for an open internet to continue: Many, including Washington state's attorney general, have already threatened to sue over the decision.