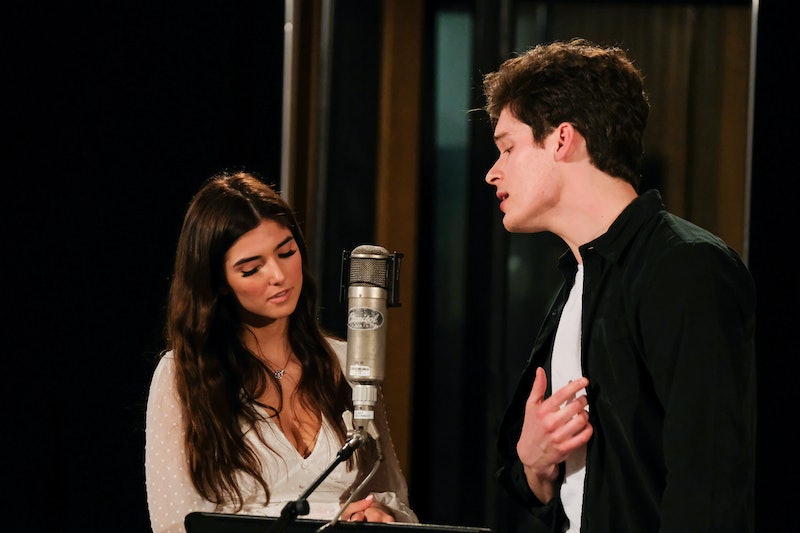 Let's be real: There's something inherently sexy about someone who knows their way around a guitar. Even the folks behind The Bachelor franchise have succumbed to this universal truth — their latest spinoff, The Bachelor: Listen to Your Heart, takes a group of talented singles, and makes them compete to fall in love (and land a potential music career). But what exactly what makes musicians belting power ballads so appealing? And is the desire to discover a suitor singing outside your bedroom window a gendered phenomenon? According to experts, there is science behind why women want to be serenaded.

Physiologically speaking, therapist Jaime Bronstein, LCSW, says listening to music directly impacts the neurochemical systems in the brain, which are responsible for feeling pleasure. According to a 2014 study published in the journal Frontiers in Psychology, Wesleyan University psychologists found that people can experience "chills, thrills, and skin orgasms" when listening to a song that really resonates with them.

Per Bronstein, once the "feel-good hormones" like dopamine, serotonin, and oxytocin start firing, your attraction levels begin to rise. So, it's also possible to be more attracted to someone once they've expressed their feelings to you through song. And that's especially true for women.

According to Ashley Ertel, LCSW, a Talkspace therapist who specializes in music therapy, music impacts cis-gendered women and men differently. A 2019 study of 40 cis-gendered, heterosexual couples, published in the journal Scientific Reports, found that listening to music can reduce levels of cortisol, the stress hormone, more significantly for women than men. In fact, it didn't do a lot to reduce stress levels in men. While women tend to use music to relax, men tend to use it for stimulation and creativity.

"This could absolutely be the reason behind why women like being serenaded and find musicians attractive," Ertel says. "We know that reduced cortisol and lower blood pressure are factors directly tied to positive health outcomes, and listening to music does appear to have this greater effect on women." When something makes you feel good, your body is more likely to crave it.

Besides, when someone makes an effort to serenade you, it feels personal. "Even Rihanna sings about wanting to feel like 'the only girl in the world, ' right?" Ertel says. "Serenading someone is just one way to make someone feel incredibly special at that moment."

There's also a physiological correlation between music and attraction. A 2014 study of 1,465 women published in the Proceedings of The Royal Society found that women tend to find musicians more attractive when they're at their most fertile time of the month. According to researchers, men who can produce more "complex" music, such as classical music, are also processed as more intelligent. So, women may just be biologically drawn toward men with musical capabilities — whether they're aware of it or not.

So, if falling in love while finding the right key was exactly what The Bachelor producers were hoping to capture, it sounds like they were perfectly in tune.

More like this
The Bachelor’s Christina Mandrell Comes From One Of Country Music’s Most Famous Families
By Brad Witter
The 3 Zodiac Signs Most Likely To Get Married Later In Life
By Kristine Fellizar
4 Zodiac Signs That Will Take Forever To Admit They Like You
By Kristine Fellizar
10 Photos Of The Wildest Limo Arrivals From 'The Bachelor' Premiere
By Brad Witter
Get Even More From Bustle — Sign Up For The Newsletter
From hair trends to relationship advice, our daily newsletter has everything you need to sound like a person who’s on TikTok, even if you aren’t.