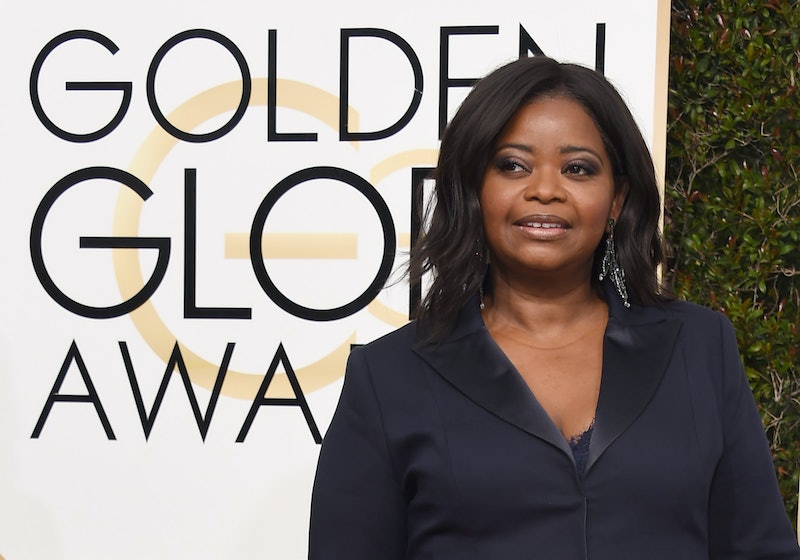 Whenever an awards show rolls around, red carpet viewers' attention tends to lock on one thing: The dresses. At the 2017 Golden Globes, however, fans were treated to multiple lady celebs wearing traditionally masculine looks on the red carpet.

Evan Rachel Wood, Octavia Spencer, and Felicity Huffman all forewent the usual tacit "dress" code (see what I did there) and instead rocked the red carpet in suits. I, for one, have my fingers crossed that their bold moves will set a precedent for tradition-bucking at all of the 2017 awards shows.

Awards shows have been running since the earliest days of the silver screen, with the first Academy Awards taking place in 1929. The red carpet came later, first rolled out at the 1961 Academy Awards, but by that time, women wearing grand dresses to glitzy award shows was already an expectation.

And that expectation, it seems, has become even more intense in recent years. Designer Bridget Foley recently told Vanity Fair, "Actors [were] more in control of their wardrobes [in previous decades]. Ironically, the result was more diversity because what celebrities wore more accurately reflected their personalities and senses of style than we see today."

For example, Barbra Streisand famously accepted her 1969 Oscar for Funny Girl in a pantsuit, and it wasn't a big deal. Now, though, highlighting the modern celebs who do switch up their red carpet style is so necessary amid both the endless chatter about dresses, and the criticism from folks who don't want to see women wear nontraditional clothes. Janelle Monáe, who has made a habit of wearing the most incredible suits to events, has encouraged girls to wear what makes them comfortable, and has addressed sexist critics with undeserved, patient grace.

What makes the 2017 Golden Globes ladies' looks truly wonderful is that the celebs have opened up about their excellent reasons for donning red carpet pieces that aren't traditionally feminine.

Evan Rachel Wood's gorgeous black-and-white suit is a custom piece by Altuzarra, which Cosmopolitan reported was "partially in homage to Marlene Dietrich, Victor/Victoria, and David Bowie (whose birthday also falls on Sunday)."

During E! Live From the Red Carpet event, Wood, who currently stars in Westworld, told Ryan Seacrest, "I’ve been to the Globes six times and I’ve worn a dress every time. I love dresses — I’m not trying to protest dresses — but I wanted to make sure that young girls and women knew that they aren’t a requirement, and that you don’t have to wear one if you don’t want to. And to just be yourself, because your worth is more than that.”

Felicity Huffman also crushed the red carpet in a suit, which was a nod to one of this year's top power-suit wearers: Hillary Clinton.

Her golden jumpsuit and sleek ivory pants were a statement, Huffman told a pre-show interviewer. Refinery29 reported that Huffman told the interviewer, "I got a pantsuit in honor of Hillary. Love you, Hillary. I'm with her."

Clinton's pants were a national hot topic during her run for presidency, inspiring critique from people who are for some reason still stuck in the 1950s and drawing tons of support from fans who were thrilled to see Clinton dressing in a way that made her feel comfortable — and, like Wood said, showed young girls around the world that a boss lady doesn't have to dress to impress anyone but herself.

Rounding out our group of red carpet wonders is Octavia Spencer, whose suit only amplified the Hidden Figures star's dynamic presence.

The piece is a custom Laura Basci tuxedo styled by Wendi & Nicole, and Spencer paired it with heels that could kill a man. Spencer hasn't yet talked about why she chose this outfit (though she did tell Giuliana Rancic it was custom made by her friend), but in the past few weeks, she's shared plenty about sexism and racism in Hollywood.

In a Nov. 2016 interview with The New York Times, Spencer talked about being typecast when she tried to get a part in the 1996 film "A Time to Kill." She asked to read for a small part, suggesting a woman who starts a riot, and director Joel Schumacher's response was a classic example of the racist "black mammy" archetype.

She told the Times, "He said: 'No, honey, your face is too sweet. You can be Sandy’s nurse.' It was so funny because I didn’t know that there was such a thing as typecasting. It’s like, ‘You’re just a nurse face.’ What is a nurse face?”

In Hidden Figures, Spencer and her costars had to confront the same sexism and racism that dogs them in real life — which has emboldened Spencer when it comes to speaking out.

"Since making 'Hidden Figures,' I don’t have a problem saying to a room of male executives: 'I need a female writer or a female director,’ or ‘I need a black voice or a Latin voice,’” Spencer told the Times. "I do not feel bad about it.”

Spencer's activism on and off the red carpet is the kind of thing 2017 needs a solid dose of. As for future red carpets, fans are certainly hoping to see more lady celebs breaking free from the constraints of a dress-expectant world.

Like Wood said, celebs deciding not to wear dresses to red carpets is not a move meant to protest all dresses everywhere. But their decisions do serve as reminders that women have other choices, and it's time folks started embracing that.