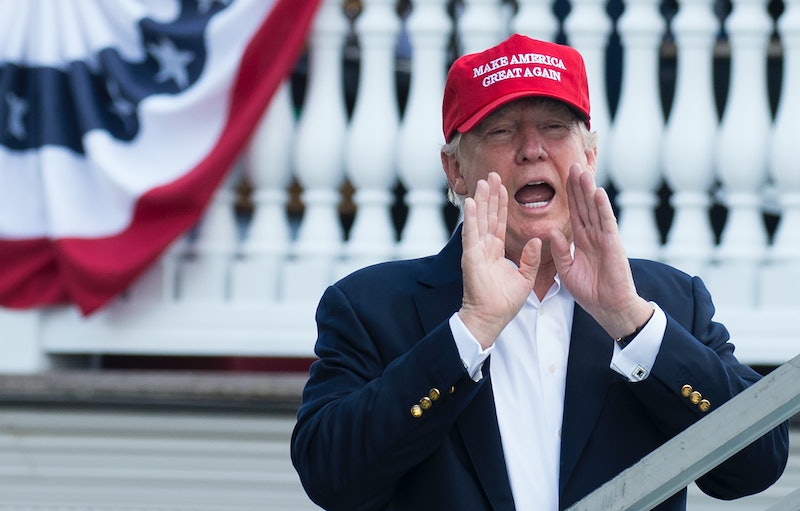 Is there anything Trump can tweet that could effectively get him kicked off of his favorite social media platform? According to Twitter, probably not. In a recent series of six tweets, the company’s official public policy team explained why Trump will most likely never be banned from Twitter. Basically, it’s because of “newsworthiness” and what the company deems as being in “public interest.”

In a tweet posted on Saturday, Trump wrote, “Just heard Foreign Minister of North Korea speak at U.N. If he echoes thoughts of Little Rocket Man, they won’t be around much longer!” Many people read that as a threat to the country of North Korea, including Ri Yong Ho, the Foreign Minister of North Korea. As reported by CNN, Ri made a statement on Monday stating, “Last weekend Trump claimed that our leadership wouldn't be around much longer and declared a war on our country.” White House press secretary Sarah Sanders responded to questions of whether Trump’s statement was a declaration of war saying, “Frankly, the suggestion of that is absurd.”

According to Twitter’s rules, as listed on their website, users “may not make threats of violence or promote violence, including threatening or promoting terrorism.” This extends to both direct and indirect threats of violence. An account that violates those terms “may be temporarily locked and/or subject to permanent suspension.” Unless, apparently, that account belongs to the President of the United States.

Twitter responded to questions about why Trump’s tweet hadn’t been removed, much less his account(s), in a six-tweet thread on Monday. “We hold all accounts to the same Rules, and consider a number of factors when assessing whether Tweets violate our Rules,” they wrote. “Among the considerations is "newsworthiness" and whether a Tweet is of public interest.” The company also stated, “Twitter is committed to transparency and keeping people informed about what's happening in the world.”

Trump’s tweets present a strange paradox in accordance with Twitter’s terms and conditions: the average person posting thinly veiled threats at a country is grounds for suspension; a President posting them is “newsworthy.” The conversation about why Trump’s tweets are controversial isn’t just, “Can you believe what the President said?” It’s, “Can you believe what he said ... and where he chose to say it?”

Imagine if each of Trump’s tweets were sent out as an official White House statement. In case your imagination fails you, there is already a Twitter bot that transforms Trump’s tweets into White House press releases for you. It’s easy to dismiss a tweet, especially when the President is tweeting constantly. But, as Twitter’s statement implies, Trump’s tweets hold more gravity than the 140 characters they take up because of the position he holds. Trump’s tweets should always be read as statements from the President because that’s who he is.

Trump is all too familiar with being blocked on Twitter: he’s done it to multiple journalists, celebrities, and everyday citizens alike. People who have been blocked by Trump on Twitter have asked about the legality of that situation, which is essentially preventing a citizen from what Trump’s own staff has called “a very powerful way for him to communicate and connect directly with people.” While one recent court case suggests it’s possible that Trump’s blocking habit is illegal, it hasn’t appeared to prevent him from continuing to do so.

This is far from the first time people have asked why Twitter won’t ban @RealDonaldTrump, and it likely won’t be the last. The list of people, places, and things Trump has insulted on Twitter is long and paved with “Sad!” He recently retweeted a photoshopped GIF of him hitting Hillary Clinton with a golf ball. The explicit invocation of violence raised some eyebrows, but that’s about all. I'll say that one more time: The President of the United States retweeted an image of him inflicting violence on his former opponent, and it was just another Sunday.

It’s no secret that Twitter has a harassment problem. It’s worth asking why a platform that has enabled a unique kind of online trolling hasn’t done much to prevent it or prohibit it. It’s also worth asking why we expect a company, who is arguably profiting from the President’s online barrages, would do much to dissuade it. How can we hold Twitter’s threshold for harassment to a higher standard than we’re apparently holding the American people’s? Trump’s threats and insulting words and blatant harassment didn’t keep him out of the White House; how can we expect they’ll keep him off of Twitter?