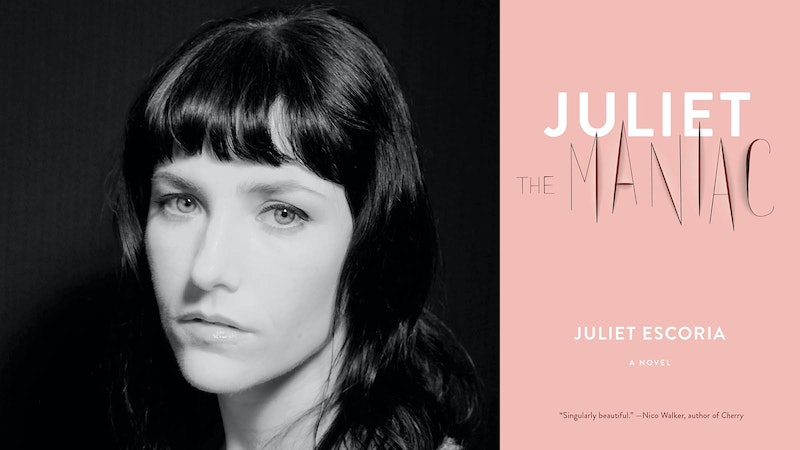 An unmistakable shimmer of optimism runs through the darkness of Juliet Escoria's Juliet The Maniac, a raw exploration of mental illness, survival, and healing. Told through a clever mix of patient logs, letters, newspaper clippings, notes, medication lists, letters from adult Juliet, and the urgent, careening voice of teenage Juliet herself, Juliet the Maniac is a unique blend of the author's personal history and fiction that spans two years of her teenage life.

Fourteen years old when the book begins, Juliet is an honor student in San Diego, bound for academic success — that is, until a sudden break in her mental health thrusts her into a reality where "glow-in-the-dark" strings exude from people's chests, shadows assault her in the classrooms of her school, and images in her textbooks morph into kaleidoscopic visions of luminous light.

After an attempted suicide, her parents remove her from school and send her to a private institution, but she continues to struggle with bipolar disorder, anxiety, self-harm, and thoughts of suicide — all amplified by drug use. She is eventually sent to live and study at a "therapeutic boarding school" for teens with mental illness and addiction. There, she has the typical boarding school experience: She falls in love, breaks rules, takes trips with her classmates, and forms fierce friendships. She also attends group therapy, consults with her psychiatrist, and continues to take a long list of prescribed medications: Depakote, Trazodone, Zoloft, Buspar, to name a few.

Juliet The Maniac is harrowing precisely for all the reasons it is also hopeful: Juliet's mental illness is often frightening, to others and herself (she calls herself a "maniac," and often refers to mental illness as "evil" or "demonic"), but she has a strong pull towards joy. She is constantly finding moments of exhilaration in her life — whether it's in falling in love or in racing down the side of a mountain on a snowboard. "You're sensitive. And that means extra pain, extra loneliness, extra sadness," one of the caretakers at Juliet's school tells her. "But it also means extra joy ... Your job is to dig for the gold."

Dig for the gold, she does. In the interview below, Juliet Escoria talks to Bustle about the thread of optimism that runs through teenage Juliet, the process of writing an autobiographical novel, and why it felt like "an invasion" writing Juliet the Maniac:

'Juliet The Maniac' by Juliet Escoria

Bustle: The book is separated into short chapters that read like diary entries written entirely in past tense. Why did you choose to write the book that way?

Juliet Escoria: I’ve had other people comment that the chapters are diaristic, which is funny because I disagree! It makes me wonder if people are responding to the content — a teenager, a girl, a series of events that aren’t appropriate for polite conversation. A fair amount of the book is habitual time, but the majority is written in-scene.

I find it so boring when books linger over meaningless details in that very "literary" way...

Maybe the other thing is I want the writing to be as short as possible. I don’t see the point in describing things like hand gestures, or having any more dialog than is absolutely necessary. This mostly has to do with stylistic preferences — I find it so boring when books linger over meaningless details in that very "literary" way — but it was also practical.

Another interesting narrative and structural feature is the inclusion of "patient log," which detail Juliet’s prescribed medications. Why did you choose to approach this in such a direct, clinical way?

JE: I knew the medication had to have a role in the book, because medication is such a big part of your life when you’re mentally ill and trying to find the right combination, or, as the doctors called it, the right "cocktail." The side effects are often very noticeable and horrible. And when you’re in an institutionalized setting, medication has just a big of a role as meals do, in terms of structuring the day. At least twice a day, everybody lines up and gets their pills doled out in little cups, and you swallow and they look in your mouth.

It also seemed like a quick way to convey just how many drugs Juliet was being put on, and just how sh*tty these side effects sometimes were.

This book isn’t polemic, but it does illuminate problems within mental health systems. Juliet seems aware of how doctor and institutions have failed her and her friends and fellow patients, but doesn’t seem particularly inclined to call them out on it, even as an adult. Why do you think that is?

JE: Part of it is I think that the majority of people — whether they’re doctors, or therapists, or counselors, or whoever — are just doing their best. There’s still so much we don’t know about mental illness and psychiatry, even though we’ve come so far. When you add volatile teens into the mix, it becomes even more difficult to not make mistakes. It’s like parenting, but with higher stakes and more variables. So while much of the treatment that Juliet receives is flawed, harmful, and/or misguided, it seemed unfair to place too much blame in them.

And the other part is I didn’t want to be a polemic, like you said. I wanted readers to be able to decide for themselves.

I think it’s easy to categorize this book as “dark," but Juliet is an incredibly optimistic teenager. How did you hope to represent the teenage Juliet to readers?

JE: What you got was exactly what I was hoping for: Juliet is objectively troubled, objectively cynical, but underneath it, she’s an optimist.

"But she is also uniquely disadvantaged at coping well with her mental illness, because she expects so much from herself and out of life."

One of the things that’s been so difficult for me when dealing with my own mental illness is that I’m by default a perfectionist. This is the character flaw that I’ve had the most difficulty wrestling with, for my whole life. I think a lot of bipolar people are incredibly driven, which gets us into trouble because we’re simply not wired in the way that most people are. As much as I want to go-go-go, I require a lot of upkeep: I have to get enough sleep, I have to have downtime, I have to be able to fit in exercise, etc. I learned this the hard way, by going into manic or depressive episodes when I didn’t treat myself properly.

I wanted Juliet to have this trait, too. As she notes in the novel, life is objectively pretty good for her: She’s smart and talented, she has loving parents who have enough money to pay for her treatment, she’s able to attract friends. But she is also uniquely disadvantaged at coping well with her mental illness, because she expects so much from herself and out of life.

"In order to write this book, I had to let this teenaged girl occupy my brain and life for years. It felt like an invasion..."

Adult Juliet tries to separate herself from teenage Juliet at the end of the novel. Yet, in order to do so, she throws herself completely into the story. Why is that?

JE: I guess it’s in the tradition of metafiction, with the traditional concerns of metafiction — a way to highlight the relationship between art and life, and life and memory. Juliet the teenaged narrator is not the same person as Juliet the adult narrator, who is not the same as me, the person, but they are all mirrors of each other. In order to write this book, I had to let this teenaged girl occupy my brain and life for years. It felt like an invasion, which felt similar to the onset of my bipolar disorder, which seemed interesting to me, and therefore like something important to add to the book.

Are there any books or authors who laid the foundation for some of the structure, themes, or characters of Juliet the Maniac?

JE: The Bell Jar, for sure. I’ve read that book multiple times, and taught it in the classroom multiple times, and long admired the writing and its realistic portrait of mental illness. I also like how uncompromising it is, and how you don’t know if Esther truly got better or not, or if the “better” stuck. The only thing I don’t like about it is how it treats the episode as an isolated incident, when mental illness is so amorphous.

"As I wrote the book, I kept the old, printed-out versions of the manuscript in shoeboxes, with other books that had elements I wanted in my own book."

Several years ago, Elizabeth Ellen, Elle Nash, and I exchanged incomplete rough drafts of each other’s books, and it was eerie how much overlap our work shared. Person/a, Elizabeth’s book, is transparent autofiction, with lots of layers. Animals Eat Each Other is told in short chapters with section titles, and is set in a similar time period, with sex, drugs, and self-harm. All three books are fragmented, and propelled by their narrator’s mental instability and flaws.

As I wrote the book, I kept the old, printed-out versions of the manuscript in shoeboxes, with other books that had elements I wanted in my own book. In a superstitious way, I guess I wanted my book to “marinate” in the other books. These books were: The Bell Jar, The Things They Carried by Tim O’Brien, My Ántonia by Willa Cather, The Heart is Deceitful Above All Things by JT LeRoy, Miles From Nowhere by Nami Mun, A Manual for Cleaning Women by Lucia Berlin, Jane by Maggie Nelson, and Ways of Going Home by Alejandro Zambra.

Juliet the Maniac by Juliet Escoria is available now.