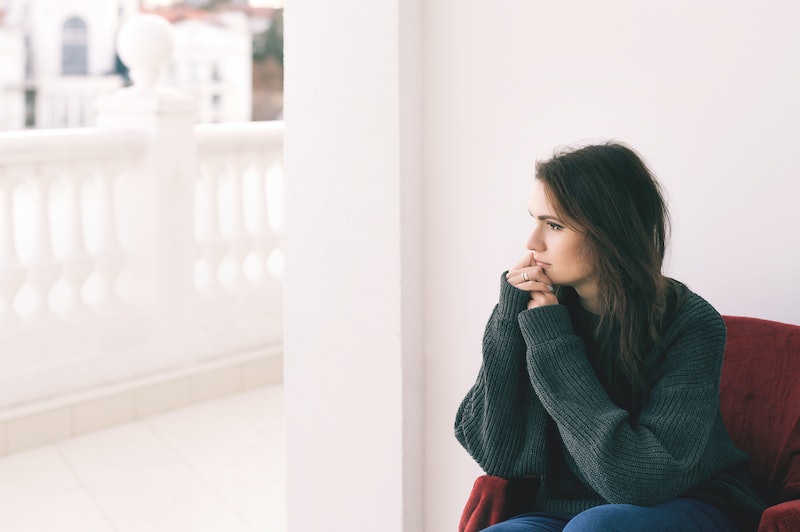 Getting hung up on someone you were in a long-term relationship with makes a lot of sense. You had time to get to know someone enough to form an emotional bond and attachment. Getting hung up on someone you barely dated is another story. For the most part, going on a few dates with someone new really isn't enough to fall in love or be too invested. Logically, you should be able to move on just like that. So why can't you stop thinking about that one person you barely went out with? According to experts, there are a few key reasons for why this happens.

"Usually falling in love with, and being unable to get over someone you barely know and have barely dated, is reflective of having 'attachment issues,'" Lauren O’Connell, licensed marriage and family therapist, tells Bustle.

Childhood may seem like another lifetime ago. But your childhood plays a pretty big role in shaping how you relate to others as an adult. If you grew up in an environment where you felt safe, secured, and nurtured by your parents, you likely developed a secure attachment style. As an adult, you're more likely to trust others, have positive feelings about relationships, and form healthy long-term partnerships.

When someone develops attachment issues, O'Connell says they may have had unstable, smothering, or unavailable experiences with their primary caregivers as a child. For instance, someone with anxious attachment may have grown up with parents who were inconsistent with their attention and affection. Now that you're in a position to form attachments as an adult, it becomes a little challenging to do it in a healthy way. If you have anxious attachment, you'll have a hard time trusting other people's motives and may tend to worry more about how your partner really feels about you.

"Often people who want relationships but have difficulties due to attachment fixate and idealize unavailable people," O'Connell says. "You get the illusion of the relationship without actually having it." This can lead you to cling onto a new partner way too early in the game, and long after the situation has ended.

Since attachment issues come from childhood, O'Connell says therapy may be a good idea. A professional can help you get to the root of why this happens and give you strategies for how to deal with it moving forward.

The reality is, not everyone has attachment issues. So if it isn't a problem for you, there's another big reason why people tend to hang on to someone they barely know and dated.

You're Fixated On A Goal, Not The Person

When you just can't stop thinking about someone who's long gone, it's normal to wonder what it actually means. Are they your soulmate? Are they still thinking of you too? For some, that may be the case. But as relationship expert Paul Bashea Williams, LCSW-C LICSW, relationship specialist and owner of Hearts In Mind Counseling, tells Bustle, it may not have anything to do with that person at all.

"People become married to the potential of having something long-term," Williams says. "It isn't necessarily about the specific person they just met, it's about the relationship status they had expectations of gaining. They had plans which included anyone who didn't look like their past and fit the mold of what they wanted for the future."

This tends to happen more often when everyone around you is in a relationship or you have a timeline for when you're "supposed" to meet "The One." It's easy to idealize someone when you barely know them. When you're expecting a relationship, you're more likely to gloss over someone's red flags, your incompatibilities, and the fact that they ghosted you, in hopes that they'll find their way back to you eventually.

The thinking is, they liked you enough to go out with you a few times and you've already invested some energy into them. If you just give up on them now, you have to start all over again. According to Williams, it'll feel like another failed relationship even if you weren't really in one to begin with.

Being hung up on someone you barely dated happens to people all the time. Getting over it and moving forward typically involves a small shift in your mindset. "The best way to get over it is to acknowledge that you haven't invested a lot into the person and you now have space to continue working on yourself," Williams says. This will help you make room for the person you're truly meant to be with.