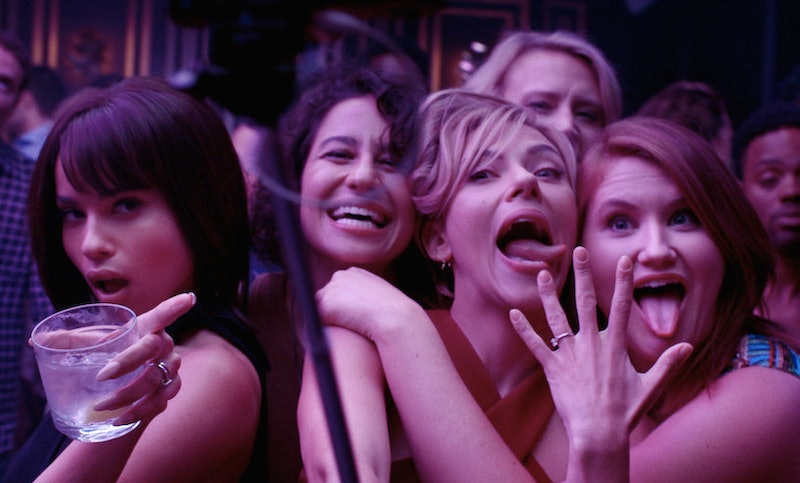 Rough Night is an woman-led comedy in a man's world. At least, that's what you're led to believe if you've seen a handful of recent headlines about the hilarious movie from Broad City writers Lucia Aniello and Paul Downs (Aniello also directed the film). There are reviews that celebrate Rough Night's ability to break into a male-dominated comedy genre (technically not wrong, statistically speaking). Some people are over the moon at the idea that a woman wrote a raunchy wild night comedy. Even one of the movie's stars Ilana Glazer told the L.A. Times that she was taken aback by how "raunchy" Rough Night is. But when I ask Aniello about the term, she stops me. She's not so sure that she agrees with applying it to her film.

"That’s interesting the word 'raunch,' what does that mean to you?" she challenges me before I can finish my question. She's casually curled up on a large love-seat at New York's Crosby Hotel, her shoes resting on the ground before her, and she's reclined in a way that suggests she's not so much frustrated with the use of the word as she is curious.

"The girls do swear conversationally, the way I just do in my normal life, but there’s not a lot of like gross-out humor in it really," she says, with a quick clarification: "Not that I’m saying it isn’t raunchy, but it’s just interesting, that word in general, because what does that mean?"

"I don't know, I guess it’s raunchy, but to me it’s just real. This is the way my friends are and how they act and to me they're not raunchy, they're just my friends," says Aniello. "If anything maybe it’s a hyper realistic portrayal of modern women. That’s what I think it is maybe more so than raunchy."

When she says this I stop and think about my own best friends and the fact that one of them coined the term "dicknotized" (when a guy is meh, but the sex is great, so you keep going back for more, obviously), the fact that we have multiple photos of what some folks would call "unladylike behavior" (not quite human frientipede, but we like ours too), and the truth that not once has any of this been performed for anyone else's amusement or shock, but for our own enjoyment.

I'll just come out and say it: It's pretty clear that Rough Night gets the "raunchy" label because some people don't expect women to behave this way in real life, let alone on-screen. Outside of very few corners of television and, like, three other films separated by many years, conventional wisdom seems to suggest that dirty, splashy, bawdy humor belongs to the Ed Helmses, Bradley Coopers, and Zach Galifiankises of the world. But that's just laughable. Women can sling a dick joke or a sexual bon mot just like any frat boy and it feels insane to have to clarify that.

The only shocking thing about the way the women in Rough Night behave is the fact that they do so on screen in a big budget summer blockbuster — which is a pretty rare thing. Other than that, their behavior is pretty damn normal (minus the murder part — that part's pretty messed up).

"I wouldn't say [the film] is so groundbreaking that [breaking ground is] all we should be talking about, because I think first and foremost it’s just like a really good movie," says Aniello, adding with a laugh that she is of course a little biased. "If it helps highlight the dearth of female comedies, because this is one of the first of whatever the statistic is, I’m happy to amplify that message, but I hope that people could just like look at it as its own thing."

And so far, the very widespread message seems to be that it's not it's own thing — the film has been written about as this example that women can play the Hangover game too. And sure they can, but that's not exactly what's happening here. What is happening is that a woman, beloved for her work on critically acclaimed TV comedy, helmed a movie that taps into that same "holy sh*t, I do that/think that/feel that too" vibe that the series does so well. And that's not shocking or weird or even ground-breaking — it's just freaking awesome.